In 2005, Joel Greenblatt, a successful money manager and adjunct professor at Columbia Business School where he teaches a course on value investing and special situations, published the investing book, "The Little Book That Beats the Market." The book quickly became a best-seller.

Greenblatt outlined a relatively simple value investing method that combined investing concepts of both Benjamin Graham (buying value) and Warren Buffett (buying quality). Greenblatt developed what he called the "Magic Formula," a value model that looks at the return a company generates on its capital, and at the firm's earnings yield.

In the book, Greenblatt showed the results of a back-tested strategy using the Magic Formula. According to information presented in the book, a relatively focused portfolio of the top-scoring Magic Formula stocks produced back-tested returns of 30.8% per year from 1988 through 2004, more than doubling the S&P 500's 12.4% return during that time.

What Greenblatt also showed though was that a strategy didn't always work and often times the stocks selected by the strategy would have some type of dark cloud over them, which was part of what made them value stocks to begin with.

Let's take an in-depth look at Greenblatt's value formula and a few stocks that score highly at the current time based on my implementation of Greenblatt's model.

To identify "good companies," Greenblatt uses the first variable of his Magic Formula: return on capital. Essentially, ROC is a way to see how much money a company is making by using its assets. The higher the ROC, the better job the company is doing in terms of making profits.

Return on capital is similar, but not identical, to the return on assets rate that Buffett and other gurus such as Peter Lynch use. Rather than using a company's reported earnings, as is done when calculating ROA, however, Greenblatt (and the model I base on his writings) uses earnings before interest and taxes (EBIT), so that debt payments and taxes don't obscure how well the firm's actual operating business is doing.

And instead of dividing that by total assets, as ROA does, Greenblatt divides it by "tangible capital employed," which is equal to net working capital plus net fixed assets. "The idea here," he writes, "was to figure out how much capital is actually needed to conduct the company's business."

The second part of the Greenblatt approach is finding those good stocks when they are selling at bargain prices. To do so, Greenblatt (and my model) uses earnings yield. Typically, earnings yield is calculated by dividing a company's trailing 12-month earnings per share by its current price per share -- essentially the inverse of the price/earnings ratio. But Greenblatt also makes some slight adjustments here, so my model does the same. Rather than earnings, EBIT is used, and rather than price, enterprise value is used. Enterprise value includes not only the price of the company's shares, but also the amount of debt it uses to generate earnings.

The strategy then ranks stocks by both criteria -- return on capital and earnings yield -- and the stocks with the highest combined ranking are favored. In the list below, names such as Discovery Communications (DISCA) , Gilead Sciences (GILD) , HP Inc. (HP) , H&R Block (HRB) , Michael Kors (KORS) and Robert Half (RHI) make the cut.

These are the top 20 scoring stocks in the Validea Greenblatt-based screen: 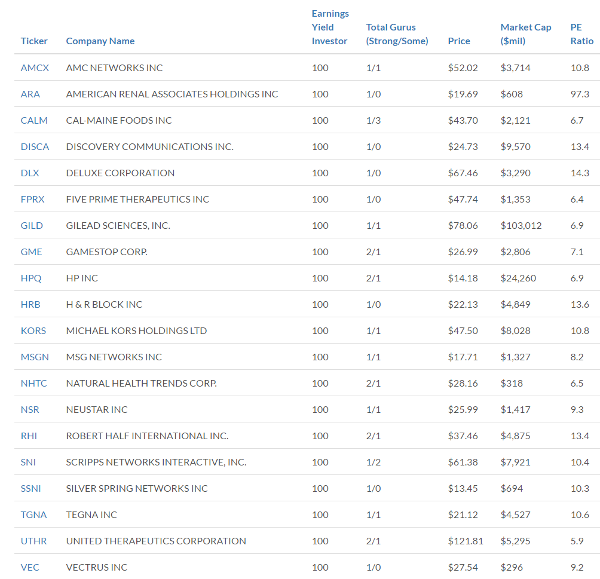 Emulating Graham's value stock-picking approach and combining that with characteristics that Buffett looks for (i.e., high quality and profitable businesses) can be a winning approach as Greenblatt showed in his book. The list above offers investors a good starting point of companies that rate highly according to my interpretation of Greenblatt's Magic Formula.

I've Used a Strategy of Trade-Offs With 2 Biotech Stocks

I tend to only use this strategy to a great extent when I have a negative or neutral view on the overall market.