The last time we took the temperature of Johnson & Johnson (JNJ) it was in the middle of June, when we said: "JNJ might see some near-term sideways consolidation to digest its gains from April, but I would expect the rally to continue. Traders could maintain/hold longs from the strength above $128."

With a couple of months of hindsight, we can see (chart below) that from late June JNJ did trade sideways. A $130 to $137 trading range has keep prices in check, but another leg higher looks likely. JNJ is trading above the declining 50-day moving average line, but near-term price strength should soon turn the 50-day average higher.

The slower-to-react 200-day average line is still positive. The daily On-Balance-Volume (OBV) line has been neutral the past two to three months, but its longer-term pattern is positive. In the lower panel is the Moving Average Convergence Divergence (MACD) oscillator, which is turning up from below the zero line. This is a cover shorts buy signal, and could be an outright go long signal soon.

In this weekly bar chart of JNJ, below, we can see that prices are above the rising 40-week moving average line -- a good measure of the strength of a trend. The weekly OBV line has dipped slightly in the past two months, but looks like it is turning back up. This small jiggle in the OBV line should be put into perspective of a two-year up-move.

The weekly MACD oscillator is in a take-profits mode, but the two averages that make up this oscillator look like they are narrowing towards a possible bullish crossover.

This Point and Figure chart of JNJ, below, shows the sideways consolidation pattern. A trade at $136.63 will be a breakout and give us a potential long-term price target of $161. 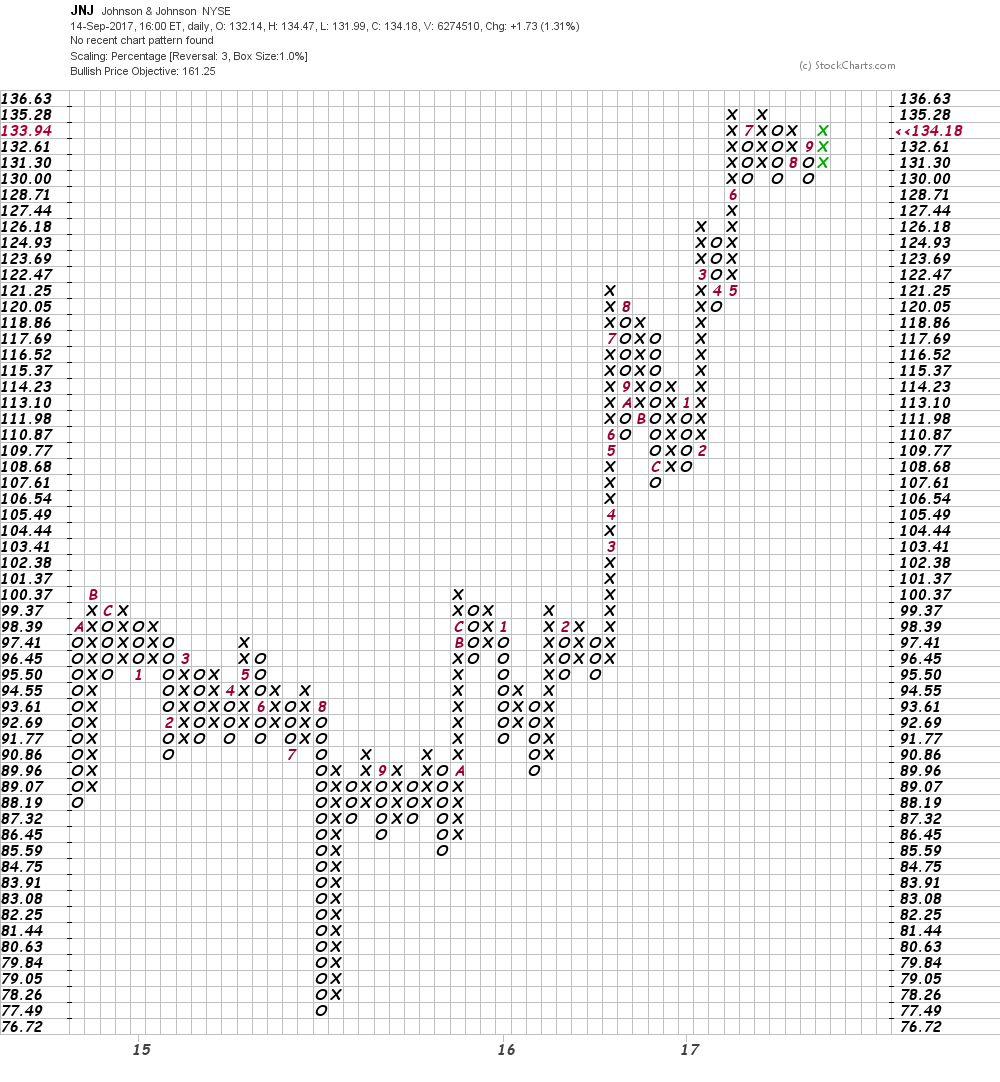 Bottom line: continue to hold longs risking below $130 now. Add to longs on a close above $136, looking for gains to $150 and perhaps higher.

Get an email alert each time I write an article for Real Money. Click the "+Follow" next to my byline to this article.
TAGS: Investing | U.S. Equity | Consumer Staples | Healthcare | Markets | Consumer | How-to