"I fear all we have done is to awaken a sleeping giant and fill him with a terrible resolve."

This quote defines Apple  (AAPL) at the moment. The company is reminding bears and bulls alike that it isn't quite dead yet. The stock has plowed through resistance, but more importantly, it is putting to rest worries about surviving only on a recycle schedule for phones.

Sure, the wireless earbuds concept worries me as a consumer. I'm sure I'll lose quite a few. Bad for me. Good for Apple. A 2% yield, still master of all things "i" and apparently free from the recent slowdown, Action Alerts PLUS holding Apple is flexing some muscle.

There's nothing that advocates a short here, despite the recent 10% pop. For those looking for an extra, pullbacks could go as low as $110 to $111 -- but should not violate the $110 level. If I were short, I wouldn't give this more than another couple of bucks. If Apple pushes through the late-2015 highs, we'll have the potential to see $130 this December. 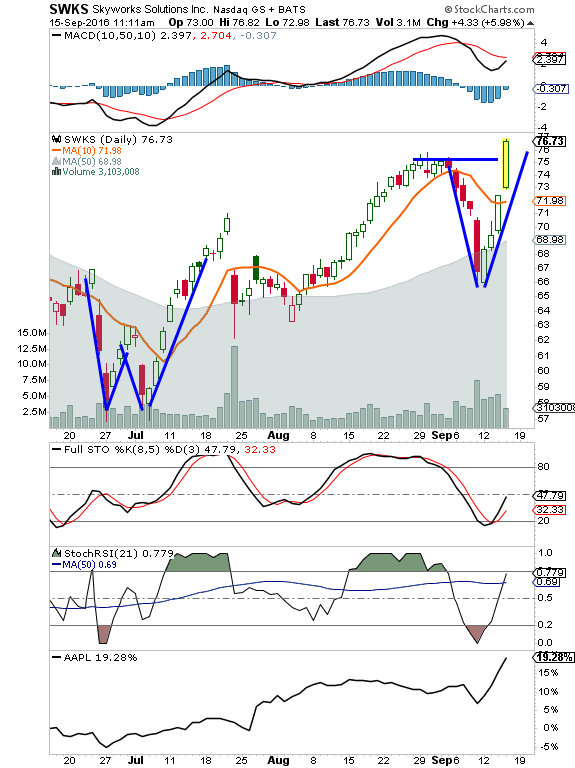 The Apple news bleeds red for bears in smaller names, as well. If a trader wants a visual definition of a "V" bounce, simply review the Skyworks Solutions  (SWKS) chart. The benefit from Apple in SWKS is 1.5x Apple's rise. That's something to keep in mind when looking to augment or hedge Apple. It may be possible to use a $1000 position in SWKS for every $1500 you were considering, or own, in AAPL. If you stretch back your views over a longer period, you'll find this ramps much higher -- running in the 2x to 4x range. In simpler terms, SWKS is a correlated alternative to a portion of an Apple position, especially over longer periods of time. 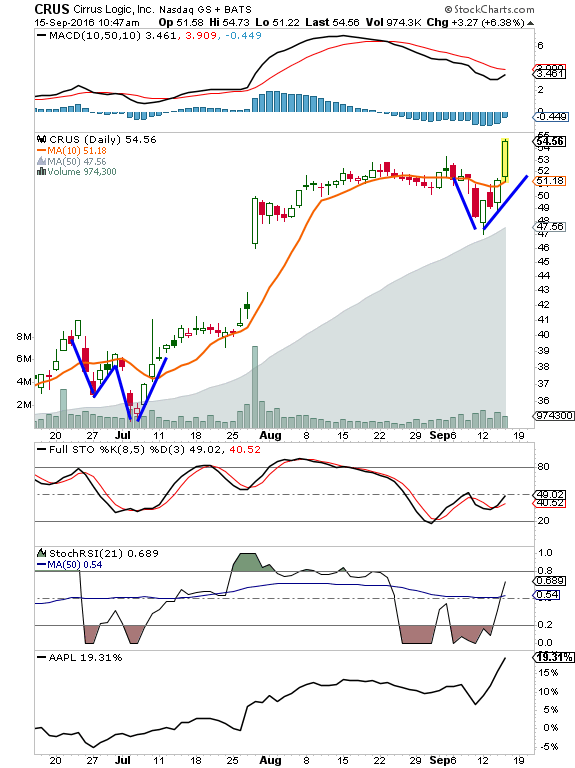 Cirrus Logic  (CRUS) is another benefactor. I played the downside on this one recently, and while it dropped quickly, it recovered in the blink of an eye. Another V-shaped bounce with solid technicals, CRUS is still a name I like longer-term. But this is not a name I would use in trying to synthesize or hedge Apple. CRUS has been making huge strides in other areas and with other customers. Own this one on its own merits, and trade it on its own terms.

Yes, the Apple rising tide is lifting all related boats this week, but when it comes to the longer-term impact on stock prices, not every name will react the same. CRUS and SWKS are two names traders will quickly lump together, but are distinct in terms of strategy and expectations with regard to Apple.

The Market Is Setting Up for the Next Big Move

Despite the lackluster action there are some pockets of good stock picking again.

Jim Cramer: 3 Companies for the Moment

Splunk, Palo Alto Networks, and Nvidia thrive when so many others are faltering.

How to Trade Nvidia Now

My expectation is that at some point Friday there will be some profit taking after the run that we have seen.