I use the term "spread" quite often. Usually when I write about a given spread, I am referring to the gap between short-term interest rates and long-term rates as they relate to the slope of the yield curve, and what that means in terms of U.S. domestic economic health, and ultimately profitability in lending practices. Of late, another type of gap has been capturing investor imagination. Oil, that is. Black Gold.

The spread between where October Brent futures and October WTI Crude futures have been trading has been growing of late. These two leading types of crude were moving much closer together, as recently as two to three months ago. The spread then was what? Three bucks or so. We have watched this gap expand. On Wednesday, Brent touched $80 a barrel, while WTI hit $70 ahead of the storm now hitting the Carolinian coast of the U.S. This morning, the spread still stands at $9.42. Energy traders understand what this means. Do you?

Put quite simply, this adds value for U.S. refiners. The wider the gap between the global benchmark, which is Brent, and the West Texas variety, the more attractive the West Texas variety becomes. What happens here is that U.S. refiners are able to create a vig of sorts by purchasing the cheaper sweeter U.S. oil, and after treatment, selling the newer refined products at global benchmark prices. Got it? The wide spread is a gift for domestic refiners.

My go-to refiner as a trader has always been Valero Energy (VLO) . A trader might also want to look at Marathon Petroleum (MPC) . Marathon has seen better margin expansion this year and is less exposed to the Gulf of Mexico. For this article, I'll stick to the name I know better. This trade worked well for my book in the wake of Hurricane Harvey's impact upon West Texas last year. I am likely to once again initiate a long position in this name as long as these prices remain this far apart. Of course, this is something that a "do it yourself-er" would have to keep an eye on. That trader would also have to remain vigilant, as this is obviously hurricane season, and such dangers as damage to equipment, and choked off supply chains become realistic threats.

VLO trades at 11 times forward looking earnings versus an energy sector currently averaging up around 17 times. The firm crushed expectations for the second quarter for both EPS and revenue expectations, displays robust cash flows. This firm does run with twice as much in total debt as it does have on hand in terms of cash and cash equivalents. That said, both the Current and Quick Ratios stand above the crucial 1.00 level. For me that means that they can pay their bills. For those who may not have noticed, Citigroup (C) maintained this name as a "buy" last week, and elevated their target price from 125 to 134. 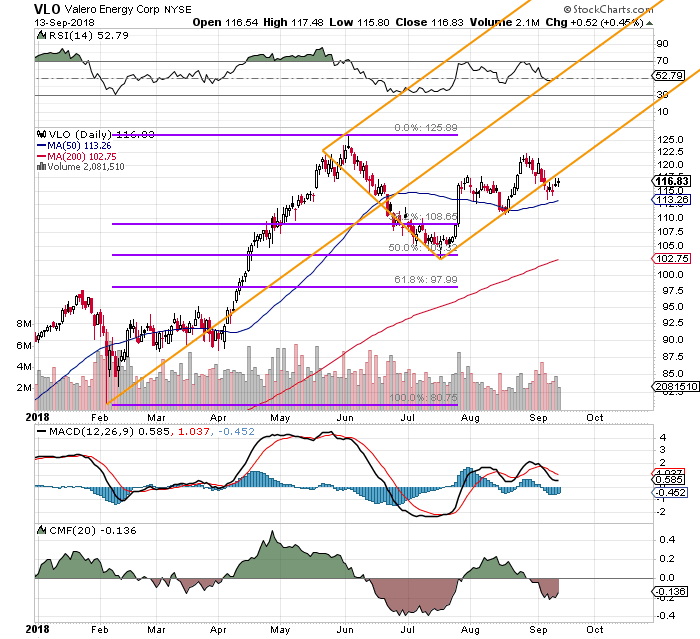 What I see here is a daily MACD and Money Flow that have recently run into trouble. The broadening of the spread between Brent and WTI could not cone at a better time, particularly with pressure having been placed upon the lower trend line of that 2018 Pitchfork.

The $103 50% Fib level worked like a charm back in July. My thought is that on a non-headline related sell-off that visible support could arise at $108, given the recent slope of the chart. My thoughts are that Citi's $135 target price is extremely realistic by November if that line can be regained. This name reports on October 25th.

The options trades create a net credit of $0.84, reducing net basis on the equity to $115.99 should none of these options actually end up being exercised.

The purchase of the $125 call amplifies the equity position if the name does go on a run. The sale of two $135 calls cover both the established equity position, and what has been created through the purchased call. The sale of the lower strike put reduces net basis, while forcing the trader to average down at a discount in the event of a serious meltdown.

Back in the 1990's, a hockey player named Mark Messier was known around New York City as "the Money Man". Messier earned this moniker through his habit of coming through in the clutch. After leading his old team, the Edmonton Oilers to a bevy of Stanley Cup championships over the prior decade, he had done the impossible, and led the New York Rangers to a championship all their own in 1994.

There's a new "Money Man". Actually, not really all that new. These days, the term refers to Amazon (AMZN) CEO Jeff Bezos, the planet's richest man. Yesterday, Bezos made news, a ton of news. First, he and his wife MacKenzie announced the formation of the Bezos Day One Fund that will support existing organizations that aid homeless families. The new fund will also create a network of pre-schools in low income areas. Bezos has committed $2 billion of his estimated personal wealth of $164 billion to this new charity interest, and has clearly shown an increased interest in philanthropy of late.

Bezos spoke in Washington last night. Hopes were that he might mention his decision on a winner for where Amazon might locate their second corporate headquarters. Those hopes were dashed early on in the event when Bezos indicated on that he would answer that question by the end of the year. The crowd in attendance actually booed (somewhat good-naturedly) this avoidance.

Jeff Bezos was careful not to pick a fight with the president throughout the interview with David Rubenstein. In defense of his Washington Post, he did express his belief that it would be dangerous for any elected official to demonize the media, but that is about as far as he went on that. As far as Amazon (Bezos holds a 16% stake) goes, he expressed a broad understanding that large companies will come under regular scrutiny. He took a pass when asked about presidential tweets aimed at the firm. Basically, it seemed to be a "stay out of trouble" interview.

Retailers call this firm the "Death Star". Cloud Kings call Amazon Web Services ... number one. This is the company that has forced Walmart (WMT) to evolve just so they might compete. This is the firm that through Prime membership has created perhaps the most loyal customer base in history, not to mention the subscription economy. Speaking of Prime, Citigroup analyst Mark May mentioned Prime when he raised his target price on AMZN from $2100 to $2250 earlier this week. May expects membership to grow to 275 million by the year 2029 from the already whopping total of 101 million at the end of 2017. Going to need the rest of the developed world for that one.

Why do I call Amazon, the last FANG standing? Well, for starters, it's the last one that I still have a position in. I jettisoned the tail end of my long position in Alphabet (GOOGL) a couple of weeks back. I still will play Netflix (NFLX) through the options market from time to time, but have not really had a conviction there for months no. I never did have a position in Facebook (FB) . Yes, I missed a lot of upside with that one. I also skipped a lot of pain this summer for those shareholders. Honestly, I have just always considered Facebook just too poorly managed a company for me to get involved with.

There is recent Amazon news, but I don't think lower prices at Whole Foods, or Go stores are really going to be game changers. The market-share that this firm has built in the consumer convenience retail space, and in the fastest growing business maybe ever... the cloud will, I believe continue to differentiate this firm from it's (if it really has any) peers. 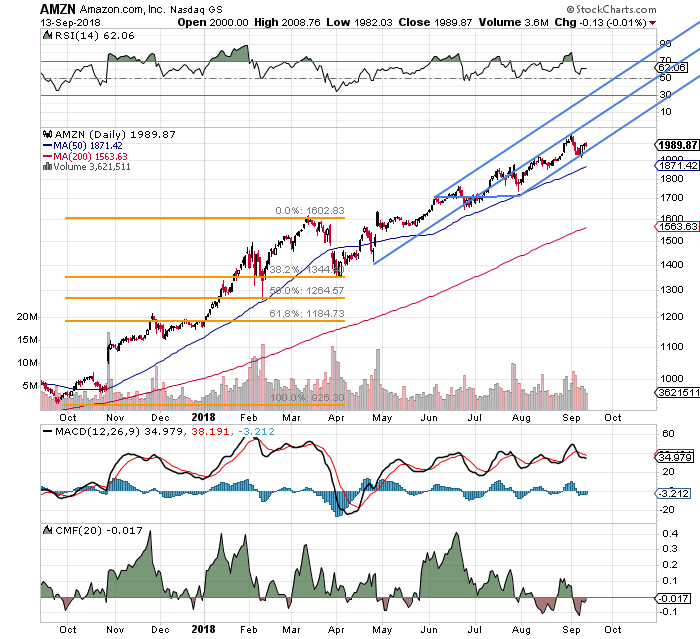 Money Flow looks a little soft. So does the daily MACD. That's really nothing compared to what has happened to the rest of FANG. Blame ETFs, and passive investment. You can use my Pitchfork, or you can use the 50 day SMA. The stock always seems to pivot around that trailing indicator as it climbs. Perhaps, I may use that area to increase my long position on any sustained pull-back.

My price target remains a below consensus $2100. We all know about the $2500 target that Morgan Stanley's Brian Nowack placed in this stock toward the tail end of August. I will wait until my target is both pierced and held on at least one test before I make a change. The industry average, for your information is now $2162, up 20 bucks from two weeks ago.