Freeport-McMoRan Inc. (FCX) is looking a little vulnerable now. We gave parameters last month when we took a deeper look at FCX the stock and the price and trend of copper futures. It was a longer than usual write-up, and at the bottom we concluded: "FCX looks like it can rally and retest the January-February highs around $17. Prices look like they can break out on the upside but we always want to have a risk point in mind. A close below $14 on FCX would turn the chart bearish and I would liquidate long positions."

Now that FCX has closed below $14, having stopped short of its February highs the past month, we want to look at the downside. A review of the daily and weekly charts and indicators should put us back on track.

In this daily bar chart of FCX, above, we can see that prices have just closed below the rising 50-day moving average line. The flattening 200-day moving average line is just below the market and could be broken as soon as today. Prices made a new high for the move up in the latter part of August, but volume did not pick up much and the On-Balance-Volume (OBV) line very briefly made a new high for its move up.

Now look at the 12-day momentum study, which made a lower high in the second half of August. When prices make a new high but momentum weakens, it is a bearish divergence and it tells us that the rally is running out of steam, so to speak.

In this updated weekly bar chart of FCX, above, we can see that tomorrow (Friday) FCX could close below the flat 40-week moving average line. The pace of volume has been declining since early 2016 and the weekly OBV line has been mostly neutral that entire time. The weekly Moving Average Convergence Divergence (MACD) oscillator looks to be narrowing towards a crossover and sell signal. 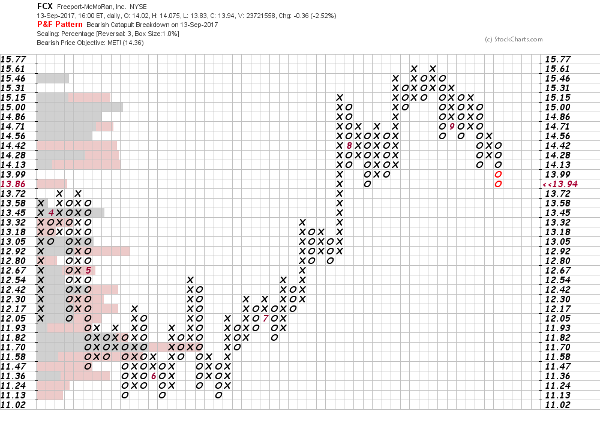 This Point and Figure chart to FCX, above, shows us two key clues. The price action from late July and into September shows a distribution pattern (selling) with a downside price target of $14.36. We have reached that target, but prices are still pointed down. The next area of possible support on this chart is $13.18 to $12.80.

Maybe it holds. Maybe it doesn't. The big problem I see with this chart is that there was a fair amount of volume traded in the $14.13 to $15.15 area. These traders and investors will either be selling now, because they are all at a loss, or they will likely cap rallies back to their break even points.

Get an email alert each time I write an article for Real Money. Click the "+Follow" next to my byline to this article.
TAGS: Investing | U.S. Equity | Industrials | Basic Materials | Markets | How-to | Risk Management | Stocks