Naturally, I was interested in what the charts and technical indicators looked like. Are both saying the same "story" or is there a divergence between these two methods?

In this daily bar chart of AIG, above, we can see how prices sold off sharply in August. AIG broke below both the 50-day and 200-day moving averages. Both are pointing down with negative slopes. Prices briefly broke the April lows and rebounded, but it looks like prices are rolling over to the downside again.

The On-Balance-Volume (OBV) line has been weakening since June and suggests that sellers of AIG have been more aggressive for several months. In the lower panel is the momentum study showing that the pace of the decline is slowing.

In this weekly chart of AIG, above, we can see prices are below the declining 40-week moving average line. The weekly OBV line has been declining the past two months and the MACD oscillator is below the zero line for a sell signal. 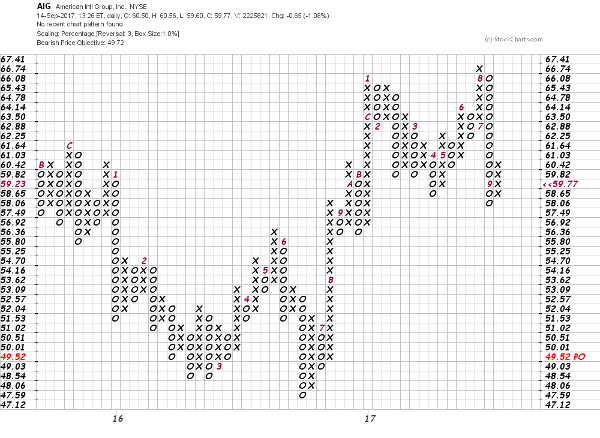 Bottom line: The price of AIG turned down in early August and does not look done or over yet. Prices have bounced recently but with the majority of the indicators in a bearish mode, I would anticipate further declines for AIG.