This commentary previously appeared on Real Money Pro on Sept. 14, 2016, at 1:50 p.m. ET. Click here to learn about this dynamic market information service for active traders.

The fact that gold prices have one of the more reliable annual price patterns isn't an obvious one because it is a mined commodity. Nevertheless, 'tis the season for the gold bulls to shine. Gold generally finds strength through early- to mid-September prior to the Indian wedding season, which runs from October through December. Elaborate weddings in India date back thousands of years and have consistently been a driver in the gold market. Traditional Indian weddings involve a bride draped in gold, helping India to become the world's largest consumer of gold jewelry. India accounts for roughly a third of global gold demand, with half of that being spent on jewelry for the average 10 million weddings held there each year.

Our friends at Moore Research Center point out that, over the last 15 years, a trader buying gold on or around Sept. 15 and selling Oct. 8 would have been profitable roughly 80% of the time, or 13 of those 15 years. 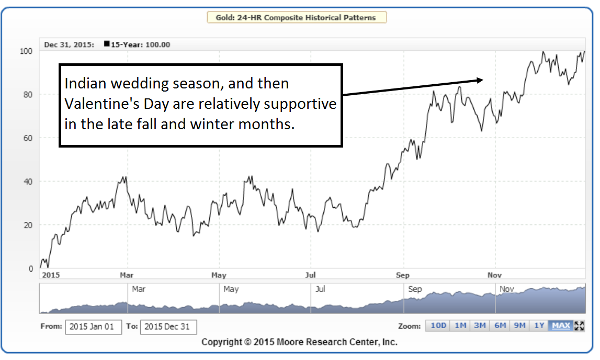 In addition to bullish seasonal tendencies, the gold market appears to be in a positive tilt, according to standard technical analysis techniques. For instance, following the Brexit vote, gold has essentially been digesting its massive 2016 rally. While consolidating, gold prices have formed a triangle pattern, which is generally assumed to be a sign of trend continuation. The December gold futures contract will test resistance as marked by the triangle near the $1,350 price. Should prices break above this level, there will be resistance at $1,385, but we believe gold could move into the $1,430 to $1,450 range on follow-through buying. This would be roughly a $100 per ounce increase over the current market price. 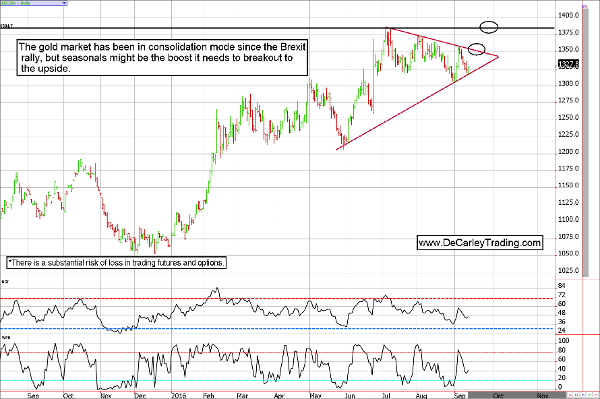 Despite strong seasonal studies and a bullish chart formation, gold bulls should be concerned over the number of bullish bets being placed by speculators. According to the U.S. Commodities Trading Commission's Commitments of Traders Report, there are roughly 276,000 net long positions being held by the large speculator (smart money?) group of traders. This is the most aggressive long position this category of traders has employed in the last 25 years. The last time speculators were holding similarly large net long positions was during the glory days of gold (2009 to 2011) before topping out near $1,900 per ounce.

Interestingly, large speculators maintained aggressively long positions for about two years before finally opting to liquidate, which nearly halved the price of gold. Thus, although traders are overly long, it is conceivable that gold prices could move higher in the short run, according to seasonal and chart momentum. But gold prices could run into trouble as the bull market reaches the mid-$1,400s, which would tempt the bulls to take profits.

Get an email alert each time I write an article for Real Money. Click the "+Follow" next to my byline to this article.
TAGS: Commodities | Markets | Basic Materials | Investing | Gold

China Is Selling State Reserves, So What Is It Trying to Tell Us?

China buys low and sells high when it comes to commodities, which makes its latest moves worth watching for telltale economic signs.