I've been writing a lot about rate hikes recently and trying to explain how these are nothing more than fiscal expansions or "helicopter drops." (Fed sending out money to people.) Today I am going to go one step further and say that it's no longer a question of getting a rate hike or not getting a rate hike. Rather, it's the fact that we desperately need a rate hike.

Why do I say this? Simply because we are in need of some fiscal expansion right now, and here's why: I am starting to see an unquestionable slowdown in government spending. While total spending for the fiscal year (ending Sept. 30) is still on track to come in just below the 2009 record of $4.58 trillion, the rate of spending growth is clearly slowing. It peaked out in mid-August at 4.2% year over year. Since then it has eased back to 2.54% year on year, which is where we are right now. That's a slowdown in the growth rate of almost 40%.

It's also no coincidence that the stock market peaked right around the same time as the growth rate peaked. In fact, the stock market peaked exactly on the same day that spending peaked: Aug. 15. Since then it's been trending lower, in tandem with the slower government spending trend. Hopefully we have just retreated to a slower spending rate at this new level, and it stabilizes. That wouldn't be so bad, but if it slows further it would be bad news for stocks and the economy.

Before I pull the plug, I will say that there is one potential saving element to this picture, and that is if we start to see bank lending pick up. To review: government spending adds to income and demand, but demand can also be sustained and even increased if the private sector (households and firms) decide to take on more debt.

I have explained the difference between government money and bank credit before. Government money comes to you with no corresponding liability: you get a dollar bill or a Social Security check or you get paid because you are a vendor to the government and that is your money to spend or save as you please.

On the other hand, with a bank loan, while it does increase your checking account balance, it is also a debt that you have to pay back with interest. So it's not a net addition to your income, but it is a net addition to the bank's income. I will get to that in a minute.

The reason I bring the whole bank lending thing up is because last week we saw a huge, $54 billion increase in loans and leases at commercial banks. This was the largest one-week increase in four years. (See graph.) 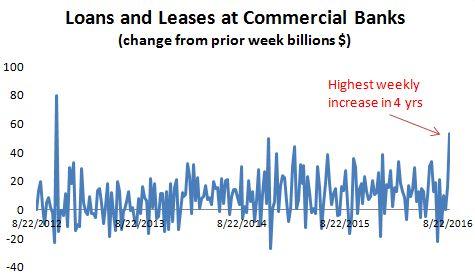 Admittedly, one week does not make a trend; however, it would be very opportune and timely if the private sector decided to take on more debt, right at the exact moment when the government was slowing its spending (slowing its rate of debt accumulation). I find it interesting as well that the jump in loans and leases came the week following all those comments by Fed officials about how the time was getting closer to when they were going to resume the rate hikes. Like I said in my post yesterday, that triggers behavior. If people know that it will be costlier to wait, they will purchase or invest now.

Several times in the recent past I have suggested that a new round of household debt accumulation could start happening, and I have been met with skepticism from people, as in, "Oh really?" Yes, oh really. I will post, once more, a chart of household debt service payments as a percentage of disposable income and you will see that it is currently at 40-year lows. This contrasts with the record high debt burdens that were the reality in 2007. Totally different picture now. The household sector can easily take on more debt, and most likely will. (See graph.)

Let me end by discussing something that I alluded to earlier, which is the fact that a new debt accumulation cycle will be very positive for banks and bank earnings. For one thing, higher loan demand will create more bank assets and that will translate into more income and earnings.

Most bank stocks right now are trading with attractive p/e ratios and they look like very good investments. Wells Fargo (WFC) in particular looks like a good value, especially since it got knocked down by the recent phony accounts scandal. I don't own that stock, but I would definitely buy it below $47.

Get an email alert each time I write an article for Real Money. Click the "+Follow" next to my byline to this article.
TAGS: Investing | U.S. Equity | Financial Services | Markets | Economy | How-to | Risk Management | Stocks

There are fresh outright sell signals.

Make a Run for the Banks

Here's a play in the Financial Select Sector SPDR Fund as its approaches $25.