SolarCity (SCTY) shares have cratered 71% from their mid-December high of $58.87, and they are poised to face strong headwinds going into the remainder of the year.

Driving this expected turbulence is a combination of a slowdown in the solar-installation industry in the second half of the year and declining odds that its bailout merger with Tesla Motors (TSLA) does not go through.

According to a recent report by Axiom Capital Research, an extension of a federal tax credit to prompt more consumers and businesses to install solar on their rooftops is likely to lead to weaken solar demand in the second half of the year, as procrastinators take advantage of the extra time to apply for rooftop solar systems.

And while this does not bode well for any company in the solar installation business, it serves as a double-whammy for embattled SolarCity (SCTY) , which is in the midst of trying to convince Tesla Motors (TSLA) shareholders it is worthy of the high-profile electric car maker's $2.6 billion acquisition plans.

"SolarCity is in dire need of cash. It's already gotten two bridge loans from Tesla and it needs this deal to go through," said Gordon Johnson, an Axiom senior analyst, told Real Money this week. Axiom, in its June 28 report on SolarCity, estimated the company was quickly burning through its cash and would likely fall to near zero, or $1.4 million, by the fourth quarter. As a result, some Wall Street watchers have been whispering the "bankruptcy" word as it relates to SolarCity.

In placing the odds that Tesla's SolarCity acquisition will go through, Johnson is currently giving it 50-50, down from his previous estimate in June of a 60-40 chance, he said. Axiom currently has a Sell recommendation on the stock and a $7 price target. Johnson noted that price target takes into account a failed Tesla buyout of SolarCity and represents less than half the value of its closing share price on Tuesday of $17.06.

And while SolarCity received some investor love earlier this week when it raised a $305 million equity investment from a private investment firm to finance solar projects, as well as an 18-year loan through five institutional investors, it still continues to burn through cash at a fast clip and now likely faces an industry slowdown in installations in the second half of this year.

"Before an incentive ends, you usually see a rush of customers a year to year and a half before," Johnson said. But since the federal tax incentive has been extended, the usual procrastinator crush is expected to be delayed.

Previously, the federal Solar Investment Tax Credit for commercial and residential installations was supposed to drop to 10% from 30% on Jan. 1, 2017. But in December 2015, Congress approved extending the tax credit of 30% through the end of 2019, according to a report by the Solar Energy Industries Association (SEIA).

Under the revised law, the credit would then drop to 26% in 2020, 22% in 2021 and then 10% for commercial solar projects and zero for residential from 2022 and beyond, according to the SEIA. The purpose of the extension, according to the SEIA, is to promote more growth for the solar industry. Solar installations are expected to rise 54% to more than 72 gigawatt nationwide between 2016 through 2020.

However, what Axiom's research found in tracking new rooftop solar applications filed with the California Public Utilities Commission by investor-owned utility companies like PG&E and Southern California Edison and others, the trend for new applications is declining.

And with California accounting for 39.2% of the cumulative installations in the nation, the Golden State serves as a proxy for what the rest of the nation will likely incur.

In its Sept. 1 report, Axiom stated data from the California Solar Initiative found that June rooftop solar system applications plunged 23.8% month-over month to 52.7 megawatts across the state and fell a whopping 42.4% over year-ago figures.

But an even more chilling figure is that new solar applications on a year-over-year basis have fallen in six of the past seven months, with June marking the steepest drop of all. Axiom notes in its report that this is "suggesting demand in CA's rooftop solar market is decelerating." 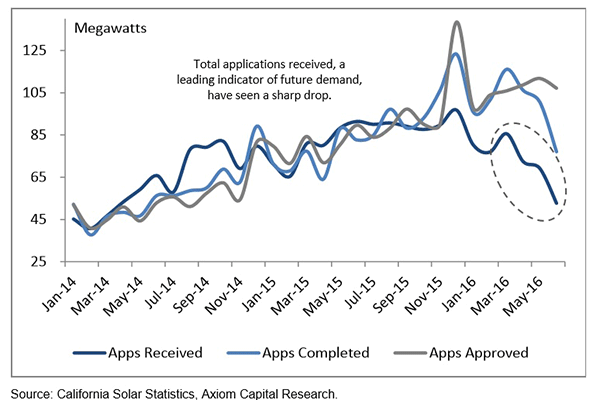 And in looking at the pace of applications (below) that the top four California solar vendors have generated over the last two years, SolarCity's applications have "slowed materially" since November, according to Axiom's chart.

For SolarCity, it's prospects aren't looking too bright. 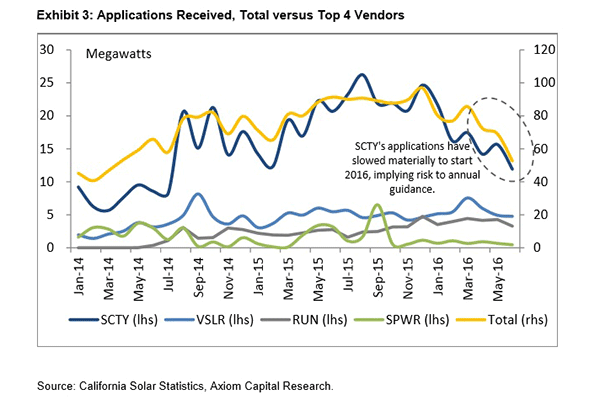 Get an email alert each time I write an article for Real Money. Click the "+Follow" next to my byline to this article.
TAGS: Investing | U.S. Equity | Energy | Mergers and Acquisitions | Analyst Actions | Stocks