Perhaps the most frightening financial news of the day on Wednesday ended up, for the most part, largely ignored by the media. We have in recent weeks been warned on the inversion of the Treasury yield curve by several regional Federal Reserve district presidents who have pledged not to vote in support of any rate hikes that they felt might invert that curve. Immediately, Atlanta's Raphael Bostic (currently a voting member of the FOMC), and Neel Kashkari (does not vote until 2020) in Minneapolis come to mind. St. Louis Fed Pres. James Bullard , who will vote in 2019, has warned the FOMC to allow for more focus on what signals the economy might actually be sending.

The nation's central bank released their Beige Book yesterday afternoon. Yes, the domestic economy is still running warm, don't get alarmed, but there are soft spots. The last sentence of the Beige Book is a compound sentence that is meant to exhibit economic strength. However, three districts... Philadelphia, St. Louis and Kansas City all report below average growth. Hmm. This anecdotal release also had stated that tariffs were said to raising input costs for manufacturers.

Completely alarming? Perhaps not. What should be more alarming is what Fed Governor Lael Brainard said in her address to the Detroit Economic Club on Wednesday. Brainard, historically one of the most dovish members of the FOMC, at least until now, acknowledges the past relationship between an inverted 3 month/10 year yields curve, and subsequent economic recession. She also tries to explain that due to lower term premiums that "any given amount of monetary policy tightening will lead to an inversion sooner so that even a modest tightening that might not have led to an inversion historically could do so today." Okay, I get that.

That's common sense. Then Brainard goes somewhere I don't really like. She added "With fiscal stimulus in the pipeline and financial conditions supportive of growth, the shorter run neutral interest rate is likely to move up somewhat further, and it may well surpass the longer run equilibrium rate for some period." That in my opinion is academic speak for ... "expect us to keep raising rates even if policy forces traditional signs of danger to the economy to actually show up." This lack of an ability to allow the data to do the talking has gotten the central bank in trouble in the past.

Perhaps Brainard just did not notice that 25% of the Fed's districts reported that below average growth. Perhaps she just has not noticed the utter slow down for several months consecutively across both housing and auto sales data. Perhaps the lack of growth in revolving credit at the consumer level is not enough of a signal. I am not a dove by any stretch. I think you all know that. Maybe just adapt to the economic environment instead of the other way around. Obviously, liquidity, while not sounding alarms, is not what it was a few months back. There is nothing wrong with a pragmatic approach. Perhaps slow down on balance sheet management. More than a few in history have mistakenly thought that things might be different this time.

Weeds In The Garden

Not every cannabis stock was strong on Wednesday. One significant Canadian name sure was though. Tilray, Inc. (TLRY) gained 9.5% on the session. Think that's something? The stock traded at a low of $20.10 on the day that trading opened at the Nasdaq market site in July. Did you get some that day? No? Me neither. The shares are now, less than two months later, 368% higher, peaking at $108.27 yesterday.

Remember the dog days of August? Andrew Left of Citron Research does. On August 15th, Left was bullish on the name, with a $45 target price (nearly a 100% premium at the time) in place. The shares would leave that target price in the dust within two weeks. I first noticed Andrew Left bearish on Tilray in early September. Amid yesterday's pop, he reiterated that call. Citron Research expects not only the existing pipeline of cannabis related IPOs to draw investor dollars away from TLRY, but Citron expects that the firm itself will be forced to go back to the secondary market in order to fund it's own plans for expansion.

As a trader, this is tricky. There is no denying the obvious consumer demand. There is no denying legal trends. Recreational pot usage goes legal in Canada on October 17th, and despite the illegal status of marijuana usage in the U.S. at the Federal level, more and more states are legalizing the usage of this drug for both medical and recreational usage every year. In fact, I am willing to go out on a limb here and say that not one state that has legalized pot has ever thought about going the other way on their decision.

Is Citron Wrong On This?

Honestly, I don't think so, but it's not about being right. It's about understanding the environment provided. This is still a money losing operation. That, gang... has never stopped the Tesla (TSLA) crowd, so if the name achieves cult status, and the crowd is willing to ignore the fundamentals, then all bets are off. The shares are already significantly higher in the overnight. After closing at $104.95 last night, I see some volume trading above $112 per share while I work on this note, but we are still many hours from the opening bell.

Market cap for this name is, or was $9.78 billion. That will change significantly not just daily, but probably minute by minute. For the second quarter, the firm posted GAAP EPS of $-0.17. That number missed expectations by a country mile, despite revenue that printed up 95% year over year to $9.74 million. The firm's net loss for the period came in at $-12.8M, or -427%. But there's more, much more.

There seems to be a premium being built into the business in an attempt to price in consolidation, and or interest in targeted acquisitions on behalf of both alcohol manufacturers, and tobacco producers. Constellation Brands (STZ) is known to have taken a nearly 40% ownership stake in Tilray rival Canopy Growth (CGC) . Molson Coors (TAP) is known to have made investment in this space in an effort to develop cannabis infused beverages.

In addition to Constellation and Molson Coors having made investment, Diageo (DEO) , Anheuser-Busch (BUD) , Coca-Cola (KO) , Heineken (HEINY) , Phillip Morris (PM) , and Altria (MO)  have all either been kicking tires across the space, or at least have been mentioned in speculative type articles written somewhere in financial media.

Thoughts From My Desk

My own set of disciplines deny me the opportunity to chase TLRY. Believe me, while sometimes preventing a trader from taking advantage of missed opportunity, this also prevents the trader from impulse shopping. In the end, this prevents tragic error. I have been doing this for a while, just in case you don't know me. These ideas are just that... ideas, and they are all somewhat speculative in nature.

Last night, you could still buy a straddle (options strategy) with a strike close to the last sale expiring tomorrow for under $1200. One thing I think we know about this name is that the last sale is going to move around. This morning, due to the decay of time premium, that expense will likely decrease. Notice, I said last sale, and not the closing price. This is a moving target. Remember, you need the last sale to move away from your strike price by at least as much as you spend on the strategy just to break even.

One can push this out to a "strangle" in order to reduce the cost, but that will also reduce the possibility for profit. Just how dangerous is this name? Last night, a straddle strategy centered around the last sale, expiring in December (after Q3 earnings on Nov. 27th), would cost you more than $5,200 for just one contract on each side.... and more than $4000 of that expense would come from the purchase of the put side of the strategy. For those truly able to handle some risk, the sale of that same put would mean that the shares would have to drop into the mid $60's for the trade to become unprofitable.

If one does something else for a living, and maybe invests, but can't watch a screen 16 hours a day, it might be better to invest in names that have not yet seen rampant interest from the crowd. As those big names already mentioned in this article are systematically left at the altar by the objects of their desire..... there could be door prizes for those leaving empty handed. This trend of thought has me thinking of names such as Cronos Group (CRON) , a name that I am not crazy about, and Aurora (ACBFF) . The latter is a name that I have held in the "Stocks Under $10" portfolio, and that has been good to the portfolio. I had been waiting for the right price to re-engage, but perhaps the intent is better served more broadly here. This is a name that I would not mind seeing in my personal portfolio.

Believe it or not, before I got off on the cannabis tangent, my intent was to discuss Adobe (ADBE) earnings tonight, the most important earnings release of the week. I'll be brief. I am long the stock, and I am short put options. This is one of my two favorite cloud names, along with Salesforce (CRM) . Expectations are for 22% revenue growth tonight that produces EPS growth of 54%. 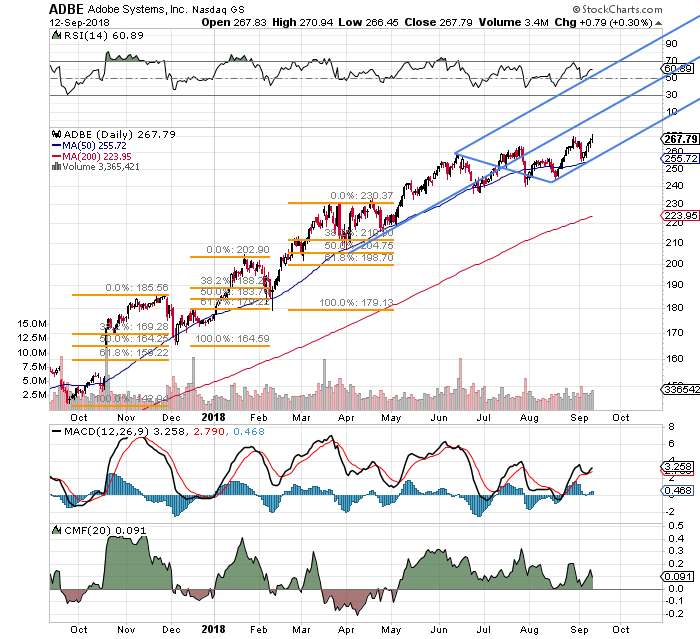 What is obvious here is the support of the 50 day SMA. The name appears to be somewhat volatile, but has continued to progressively show higher highs coupled with higher lows. Relative Strength is fine. The daily MACD,and Money Flow also look good. If one did not know how wild this space has been this season, one would expect that this name might still be preparing for further lift-off.

By tonight, I will either be very wrong or very right. One is preferable to the other, but even wrong, my thought is that this name goes north after a brief pit-stop. Color me unafraid.