BP Plc ADR (BP) was last reviewed back in July and was noted on "Mad Money" last night with our own Jim Cramer. In July I wrote that traders should "continue to hold longs in BP and consider adding to that position on strength above $48 looking for gains to $57 or higher in the months ahead."

BP looks like it has made a small August/September double bottom pattern and is now set to resume its rally as it looks like the price of crude oil will benefit from a weakening U.S. dollar. Let's look closer.

While I can't say the volume has increased from the August low, I can see that the daily On-Balance-Volume (OBV) line has firmed since August and tells me that buyers of BP have turned more aggressive. The trend-following Moving Average Convergence Divergence (MACD) oscillator gave a cover shorts buy signal in August and is pointed up towards the zero line.

In this weekly bar chart of BP, below, we can see that prices are poised to turn up. BP has been crossing above and below the rising 40-week moving average line and a weekly close above $44 should put BP in a positive light.

The weekly OBV line declined in July and August but looks ready to turn up this month.

The weekly MACD oscillator has begun to narrow and could cross to the upside above the zero line in the weeks ahead. This would be a new outright go long signal.

In this Point and Figure chart of BP, below, we can see a lot of price history. $41 was a major upside breakout and prices in recent weeks only pulled back to around that breakout area. A potential price target of $50 is being projected. 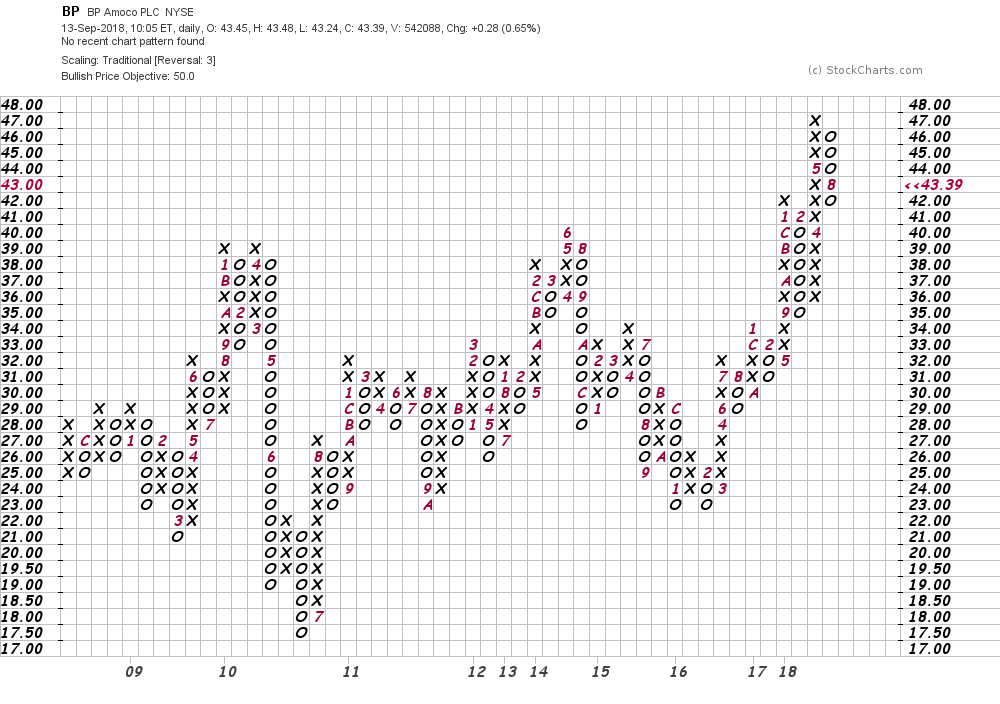 Bottom line strategy: BP looks ready to rally and traders and investors who are not long or want to buy more could go long BP on a close above $44 and they can add above $47. Risk below $41. $50 and then $55 are my price targets.