We have not reviewed the charts and indicators on AbbVie Inc. (ABBV) since December, and we gave parameters for a rally: "$63.57 is needed now to turn this (Point and Figure) chart positive with a new column of X's. A rally to $68.46 would make a new high on the chart and this would be a significant breakout." Prices rallied to $63.57 fairly quickly in early January but the breakout at $68.46 did not materialize until June. In the past couple of weeks ABBV has really taken off on the upside.

What lies ahead? Is it time to nail down some profits or can we anticipate even further gains after a high level consolidation? Let's check and see.

In this daily bar chart of ABBV, above, we can see three trends over the past 12 months. The first trend is sideways from last September to February. From February to August ABBV is in a modestly higher trend. From mid-August till now the trend of ABBV is vertical or let's call it sharply higher.

Prices are above the rising 50-day moving average line and above the rising 200-day line. It could be argued that ABBV is too far above these mathematical trend lines and that a correction is due but let's check our other indicators before we suggest a plan of action.

The On-Balance-Volume (OBV) line has been moving higher since February telling us that buyers of ABBV have been more aggressive and that the rally is supported or confirmed by the volume pattern. The 12-day momentum study shows a strong momentum reading the past two weeks but no divergence yet.

In this three-year weekly chart of ABBV, above, we can see that prices are above the rising 40-week moving average line. The 10,000 foot view of this chart looks like a large triangle formation that has broken out on the upside. The weekly OBV line has been rising since November and its strength is confirming and supporting the strong rally in recent months.

The weekly Moving Average Convergence Divergence (MACD) oscillator is well above the zero line and is in a bullish mode. 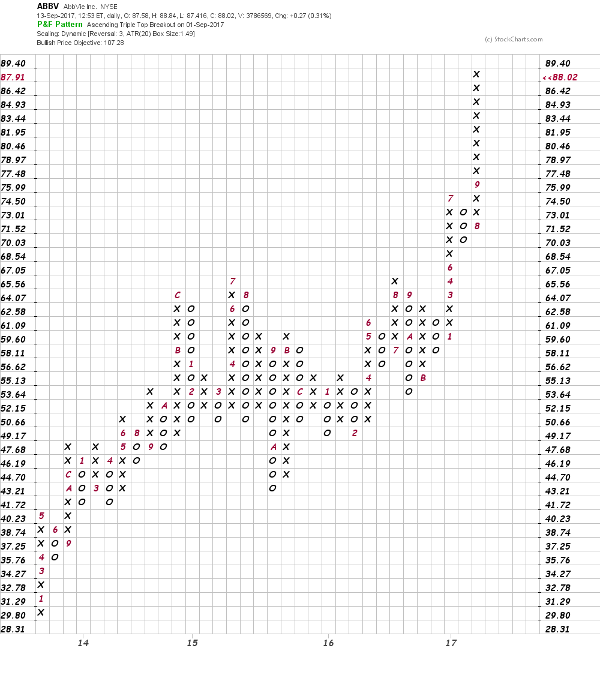 In this Point and Figure chart of ABBV, above, we can see a major breakout out at $67.05 in June. Prices have moved up strongly with one consolidation pattern along the way. A $107.28 price target is can be projected.

Bottom line: ABBV has gone "vertical" on the daily chart so there are considerable short-term profits built up. ABBV needs to catch its breath or correct a bit. A correction could be a sideways affair or it could mean a pullback within an uptrend. I would favor taking some profits looking to rebuy ABBV after its correction has run its course.

Get Alpha From Delta

I'm seeing some attractive plays among the airlines.

How I'm Playing Roblox, a Stock Caught in a Pocket of Misery

This is a stock that should do well when we have better market conditions.

Always, always, always stick to your rules. Always. This is why we have targets, pivots and panics.

Don't sit around waiting for headlines to confirm that fact.