By JIM CRAMER AND THE AAP TEAM Sep 13, 2016 | 10:30 AM EDT
Stocks quotes in this article: AA, TJX
Friday marked the end of the market's summer swoon, with all three U.S. benchmarks posting their worst losses since June. The benchmark S&P 500 Index staged its largest two-day reversal since January. As investors, portfolio managers and market strategists, we do our best to make sense of what is a complex web of interconnections, correlations and patterns. The last two trading days have, yet again, flipped the rulebooks, leaving us to reflect on what we know and do not know in attempt to discern what factors are driving the market -- and stocks in particular.


We are certainly not arrogant (or ignorant) enough to pretend to know how to time the market perfectly, but view the extreme swing from Friday's bloodshed to Monday's glory with a healthy mix of suspicion, caution and prudence.

We recommend members avoid the temptation of trading around the volatility we have experienced so abruptly over the past two trading days and instead remain committed to keeping some dry powder to deploy selectively and opportunistically. That's what we did with Alcoa  (AA) and T.J. Maxx (TJX) on Friday's selloff.

In other words, we recommend using volatility to invest in select companies we consider undervalued by the market and taking gains on companies that we consider overvalued. Patience, discipline, self-awareness and prudence are critical in the absence of logic -- from a fundamental standpoint.

Recall our mid-July bulletin Roller Coaster of Market Emotions, which encapsulates the market's short-term memory and tendency to revert to the most banal of human emotions, ranging from Uncertainty to Denial to Fear to Shock to Panic to Capitulation to Dejection to Apathy to Reluctance to Optimism to Excitement to Exuberance.

"We believe the market's accelerated gear-shift throughout the carousel of emotions -- zooming from excitement past denial, fear, panic, shock, dejection, apathy, reluctant optimism and currently nascent enthusiasm -- should be carefully considered through the lens of history. We are confident in our holdings yet would be remiss not to respect the high emotional component that drives investor decisions." The nascent enthusiasm has turned into excitement and nascent exuberance, barely even scathed by Friday's sell-off. Exuberance is the emotion reserved for the frothiest point in a market's cycle, a so-called 'top'."

This so-called exuberance could be prolonged for all we know. Instead of pretending to read a crystal ball, we identify several factors influencing the market that are being overlooked.

The market is connected at the hip with the Federal Reserve, unhealthy and unprecedented. Monday, several resident Federal Reserve doves swooped in and soothed the market, most notably Governor Lael Brainard, who remained dovish in her stance, urging "prudence," for a September interest rate hike. We find it highly unlikely that the Fed will raise rates in its September meeting next week and view December as more likely than not, although much can change in between now and the end of the year.

But this is nothing we do not know.

Instead, our advice is frank, yet simple: Do not let the Federal Reserve blind you from other central banks.

It is easy for an investor -- ourselves included -- to get sucked in to the day-to-day vicissitudes of Fed speak, yet hanging on each word breathed by any one member elbowing for their 15 minutes of fame comes at the expense of the far more profound decisions (or indecisions) taking place across the world. The Bank of Japan (BOJ) and European Central Bank (ECB) have enormous balance sheets with the capacity to move markets.

Both have expansive balance sheets that have the capacity to employ the most extreme measures of central bank accommodation.

Both have explored the depths of accommodation (past the point of no return and into the abyss of negative rates).

Both have assumed the mandate of spurring economic growth, inflation and low unemployment through their myriad monetary policy tools.

Both have failed to stimulate economic growth, lest inflation, nor tackle unemployment. Japan is now dipping into its fifth recession since 2008, despite pursuing the most extreme form of monetary policy accommodation.

The ECB, albeit less historically tattered, lacks much-needed direction. When asked about the committee's thoughts around extending its quantitative easing program beyond March 2017 following its most recent meeting -- in which it left its existing stimulus program unchanged -- ECB President Mario Draghi bluntly stated that no discussion took place. When asked about Brexit: silence.

Credit for honesty and little else.

The decisions, or lack thereof, being made by central bank leaders across the world's largest economies have profound effects on the rest of the world. For better or worse, we are global and all rely on a base level of stability by our foreign counterparts in order to capably grow, lest function on a core level.
The Federal Reserve, however strong, is not the only act in town.

The second factor involves a spike in the London Interbank Offered Rate, known as LIBOR.

The overnight rate is critical, as it is used as the floor for corporate bond issuances (which are priced in terms of LIBOR plus a certain percent). LIBOR rates have already shot to the highest levels since the financial crisis ahead of an Oct. 14 deadline for reform efforts that are aimed at up-ending reliance on money market funds. Those funds hold $2.7 trillion in assets and have been the go-to source of short-term funding for banks, hedge funds and institutional funds alike. Without diving too deep into the weeds, the bottom line is that investors have already begun moving hundreds upon hundreds of billions of dollars out of what is considered to be prime money market funds and into funds that invest exclusively in government bonds. The diminished appetite for money market funds has led to hundreds of billions of dollars in outflows and should lead to another $300 billion to $500 billion over the course of the next month-and-a-half. Banks will be left with higher costs of overnight funding, pushing benchmark LIBOR rates higher. 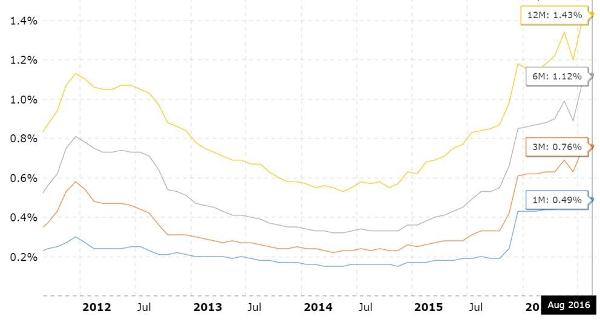 Many institutions have positioned ahead of the Oct. 14 shift, pushing one-, three-, six- and twelve-month LIBOR rates to their highest levels since 2008. We expect the rate to move higher in the coming days as the one-month implementation deadline approaches. We call this factor out first, as it is a structural change, not episodic, that impacts not only the financial institutions, which issue overnight credit, but also (often cash-strapped) corporations that have relied on cheap debt for the past seven years to fund expansionary projects (capex and R&D), acquisitions and quite prominently aggressive share buyback programs.

This brings us to the third factor we believe is being overlooked by the markets.

The next chart demonstrates just how poor management teams are at timing their capital deployment. The ascension and ultimate peak in buyback activity as a percentage of earnings appears to occur simultaneous with market peaks; the plunge (see: 2009) aligns with the market's bottom, with a steady yet steep-sloping trajectory in the seven years following signaling at the very least a noteworthy (inverse) relationship between the proportion of earnings swallowed up by buyback programs. 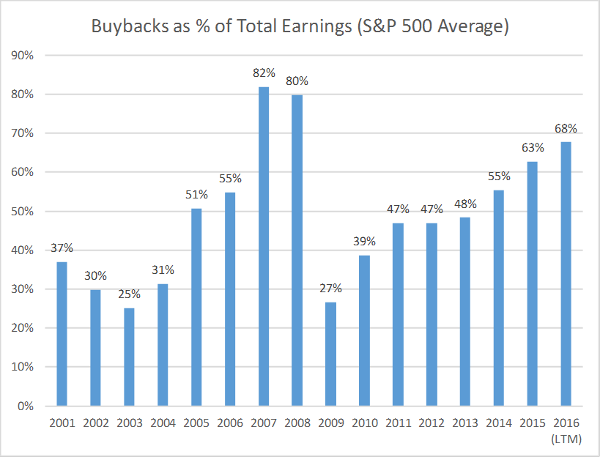 The leap in buybacks is concerning not only from a strategic level (whether managers are rational allocators of capital), but from a fundamental one as well, as the relative increase in buyback activity comes at the expense of other forms of capital allocation, prominently dividends, accretive M&A, capex, etc. 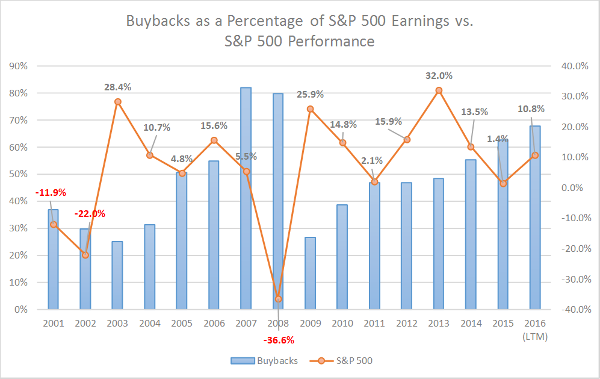 Bottom line: There are plenty of factors impacting the markets that are more established, understood and disseminated. The three we highlight are, at the very least, important considerations that appear.