By BRUCE KAMICH Sep 12, 2017 | 08:39 AM EDT
Stocks quotes in this article: UTX
We last reviewed the charts and indicators of United Technologies Corp. ( UTX) in late June. We saw a mixed picture and concluded, "We have a very mixed picture for UTX between the daily chart and the weekly chart. If there were more bullish clues I would anticipate an upside breakout to new highs but the charts don't support that. Longs should protect their gains with a stop below $118."
With the benefit of 20/20 hindsight we find that our observations were pretty good as prices moved slightly higher in early July and then started to decline sharply. Now that prices are down from $125 to near $109 a fresh look is warranted. Let's take a look at a different combination of charts for UTX this morning.

In this updated daily bar chart of UTX, above, we can see a lot of technical damage. Prices are in a downtrend -- lower lows and lower highs since late July. The the slope of the 50-day moving average line is negative and at the end of August/beginning of September there was a rally failure at the underside of the 50-day average. Prices have also closed below the 200-day moving average line and it is starting to flatten.
The volume of trading was sharply higher in the past week indicating both some heavy selling and also aggressive buying. Prices held in a narrow range around $110. If sellers were not met by buyers prices would probably have sunk lower. The daily On-Balance-Volume (OBV) line did peak in July and has declined but not all that much considering the price declines.
In the lower panel is the 12-day momentum study, which shows a pattern of lower lows to match the lower lows in price. This is not a bullish divergence. A bullish divergence would have suggested that the pace of the decline slowed.

This candle chart also shows us that prices are holding in a tight range with small real bodies (the distance from the open to the close). These candle patterns are called spinning tops and signal a balance between the bulls and the bears. This balance can mark a turning point or reversal. 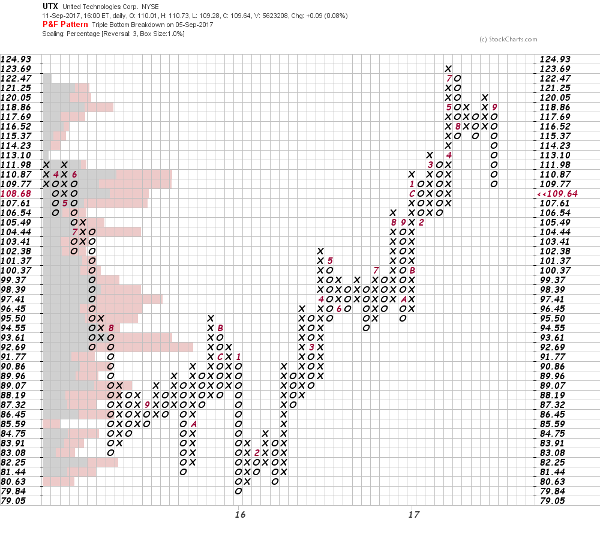 In this Point and Figure chart of UTX, above, we focus on just price reversals but have added "volume at price" information on the left side of the chart. Find the "9" on the chart for the first entry in September followed by the column of "O's" for the decline. On the left side of the graph there are some large volume bars from $110.87 to $107.61. This three dollar area could act as support as buyers there earlier in the year made money and may be motivated to be buyers there again.
Bottom line: Unlike our review in June when we could not find good reasons to be a buyer of UTX, now we find reasons to approach the long side.
(Read Jim Cramer's take today on United Technologies here.)
Get an email alert each time I write an article for Real Money. Click the "+Follow" next to my byline to this article.
TAGS: Investing | U.S. Equity | Industrials | How-to | Mergers and Acquisitions

Caterpillar Stock Could Continue to Frustrate

The latest charts are not the picture of strength.

Jim Cramer: China's Back On? Really?

At least days like today, when we're told the coronavirus has 'peaked,' show us exactly where the coiled springs really are.

Only three of the 12 names in the 2020 Double Net Value Portfolio are in positive territory since inception, with several down by double-digit percentages.