Seventeen years. I am a much older man now. Thousands of folks who simply went to work on that sunny morning, also a Tuesday including a dozen personal friends... were never afforded the opportunity to watch their families develop. I won't describe for you my on the ground perspective of the events that day. Still far too raw. Takes me back to a place that my brain still does not want to go. Still makes me smell that awful smell, and choke on that awful black powder that just would not go away. For years. I think that we have to at least in some limited way, let our minds take us back, lest we allow the pain to ease too much.

We all lost people that day. Over the past 17 years, the cancers that resulted from breathing that poison air for many months have now taken many, many more. It becomes impossible to even guess at how many were finally taken from us through the events that transpired that horrible day.

My takeaway though is clear. Morality may at times become corrupt, but at their base, most people are generally good. That is really true. Strangers will go out of their way to help each other when they could flee, themselves. Strangers will comfort each other when they witness agony. I know that you love your spouse, and I know that you love your children. Make sure they know it today, and that they know it everyday. In fact tell them right now, even if you have to wake them. Most folks will never know when they have already missed their last chance.

Batten Down The Hatches

Some in the industry remarked that in the wake of a weekend rampant with trade related headlines and just days ahead of several crucial macro-economic events that Industrial stocks as a group were in fact stronger than was the broader marketplace. Perhaps there is another reason, a scarier reason.

The governors of Virginia, North Carolina, and South Caroline have all declared states of emergency ahead of Hurricane Florence making landfall in the continental United Sates. This hurricane grew to a Category Four storm on Monday, with experts expecting that this storm could increase in strength even from there given the unseasonably warm waters in the area. Authorities are now ordering widespread evacuations for coastal areas in the region.

On top of winds now sustained at more than 140 miles per hour, the area is expected to face massive rainfall on top of a dangerous storm surge. The fear on top of the fear is that the storm stalls at the coast, in some way similar to what Hurricane Harvey did to eastern Texas last year. To add an exclamation point to the situation, the US Navy has ordered all warships stationed at Norfolk, Virginia out of the storm's path.

From a business perspective, natural disasters cause sometimes temporary, sometimes glaring imbalances in local economies. To varying degrees, conditions of scarcity will be created, and those who can most easily bring supply or even surplus to those impacted economies will see a boost to quarterly revenue.

On the other hand, certain firms, most obvious among them insurers, will be impacted negatively. According to the Wall Street Journal, Well Fargo (WFC) projects that should a storm such as this hit directly in the vicinity of the Carolinas, that the damage to these insurers could top $20 billion.

A number of firms can be expected to see greater demand for what they provide in such a situation. Just look at yesterday's action in either Home Depot (HD) , or Lowes (LOW) as evidence. I think it likely that regional stores will -- actually probably already are -- experiencing a rush on their shelves. In fact, the two leading national home improvement chains saw their shares increase by 2.2% and 2.6%, respectively, in Monday trading.

Those two firms would seem obvious. What might seem less obvious is where demand will increase as communities rebuild. This is where the transports come into focus. Think truckers such as Old Dominion Freight  (ODFL) , Landstar (LSTR) , and JB Hunt (JBHT) . Think Lumber. That brings to mind Weyerhauser (WY) , Rayonier (RYN) , and PotlachDeltic (PCH) . Think along the lines of other building materials. Raleigh, North Carolina-based Martin Marietta (MLM) has given back a lot of ground over the past few days. Owens Corning (OC) , however, showed a level of strength in yesterday's marketplace not seen since earlier this year. This firm has seen severe misses in recent earnings and a reduction in year-over-year for cash flows. This one may still present opportunity.

Let's not forget what the loss of insured vehicles across a large region did last year for auto sales. The increased demand in the wake of Hurricane Harvey last year showed up in a significant way on the charts of both Ford (F) , and General Motors (GM) . Equipment that moves, and equipment that provides power will also see sudden demand. This is where firms like Caterpillar (CAT) , United Rentals (URI) and generator manufacturer Generac (GNRC) come in. Generac traded at a 52-week high yesterday, posting a daily gain of 5.6%, despite being downgraded by Goldman Sachs earlier this summer, citing tough "storm period comps" as one reason.

Does it feel good to even think about profiting from someone else's misery? Of course it does not. Keeping in mind that this is a business column, and yet trying to remove emotion, or human feeling, from the equation completely is impossible. However, it does make this part of my job at least a little easier to write about firms that I think will do well by either finding or becoming the solution to temporary conditions of scarcity, than it would if I were to focus on names to short in front of a natural disaster. One theme builds, the other tears down.

Name a firm with a negative three-year sales growth rate that has also posted an ugly looking levered free cash flow position of $-12 billion for the past twelve months. This firm trades at just 5x next year's projected earnings, and still pays you 4.5% just to own the shares. Hmm. could it be General Motors (GM) ? 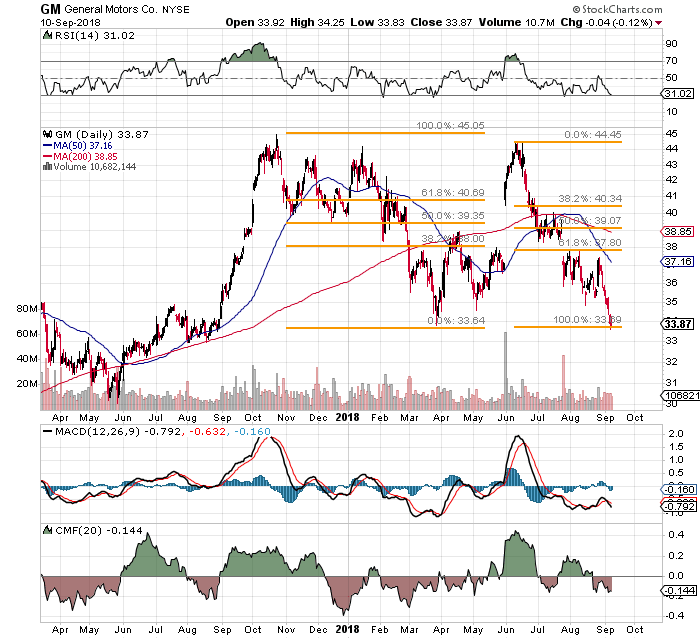 You may have noticed that while the current situation regarding trade conditions has put extra pressure on the vehicle manufacturers, Morgan Stanley just last Thursday reiterated its overweight rating on this stock -- and the firm's $46 target price. Think that's high? The fact is that over the past three months, nine ranked analysts have placed a target price averaging $51.89 on GM, making Morgan Stanley below the rest of the industry in their optimism.

Simply put, this name may be right, or getting close to right for a trade. I do not want to invest in the manufacture of automobiles long term. I do think that from a risk managed perspective, the potential for reward here is now worth some risk. Keep in mind, the firm will report third-quarter earnings on October 24, and also reports sales numbers monthly.

This strategy, at these last sales, will reduce net basis to $32.78.

The Risk: If the shares sink below the $30 strike price by December, the trader could end up long 200 shares at an adjusted net basis of $31.39.

Get an email alert each time I write an article for Real Money. Click the "+Follow" next to my byline to this article.
TAGS: Investing | Global Equity | Industrials | Transportation | Economic Data | Earnings | Economy | Newsletter | Options | Politics | Stocks