You were pretty smart when you were a kid. You knew which blocks to avoid on the way home from school. The financial markets are not really that different. A lot of folks who have been hurt at one time or another avoid even making possible the mistakes made in another time and place. As much will be made this week of the tenth anniversary of the collapse of Lehman Brothers (this coming Saturday), there will also be mention of the retail investor, and how that investor never really came back to the marketplace with the fervor of yesteryear.

I think we all had an "Uncle Louie." Uncle Louie was for my extended family, a guy who lived through the "Great Depression" and served on a destroyer in both the Atlantic and Pacific theaters in World War II. Normandy? Leyte Gulf? Halsey's Typhoon? Uncle Louie was there for all of them.

Louie survived these hardships, but not unscarred. The man lived into his 90s nearly as a pauper, despite having enough cash stowed away in a strongbox to live a little better. I think Louie was in a way representative of a generation that had learned not to trust in anyone, or in any institution. Of course, the "Great Recession" was not even close in terms of magnitude to what transpired 70 to 80 years earlier. Still, I think we have a generation of younger people that have learned to avoid risk in any form.

On Friday, we went over the double warning offered up by JP Morgan's Marko Kolanovic. If you missed that missive, Kolanovic crossed the potential of a liquidity crisis with the evolution of modern investment into a far more passive style that, in turn, is executed at lightning speeds. What could go wrong? There are certainly enough potholes on this road, and not just the possibility that the Federal Reserve could over-tighten monetary conditions, but the dangerous fiscal conditions that have boosted these markets as well.

How sound is an economy supported by tax cuts that, in turn, are financed through increased Treasury issuance? How sound are equity prices that themselves are at least partially supported through the extension of a similar fiscal condition, just at the corporate level. Buybacks with borrowed dough at peak pricing? Bet you thought that would never happen. What of the U.S. consumer, who, to some degree, makes his or her life decisions based on expected pension income when unfunded public pension liabilities dwarf anything previously comprehensible -- and that, in turn, inspires greater risk taking by pension fund portfolio managers?

These various danger spots are the "Langoliers." Remember the Stephen King book? The Langoliers were creatures that consumed everything in their path. The only way to avoid them was to stay ahead of them. A U.S. economy suddenly humming at 4.2% quarterly growth annualized, and earnings growth recently posted at nearly 25% year over year -- and projected to remain above 20% for at least another six months -- is the "how" to the "why." In a race to stay ahead of a set of significant problem spots, the increased velocity of money is the only escape pod.

This morning, there is some good news on the global front. In Japan, the Cabinet Office revised annualized Q2 quarter-on-quarter economic growth from a quite pedestrian 1.9% all the way up to 3.0%, supported by much larger-than-expected capital spending. In the UK, the Office for National Statistics also revised higher the second quarter. Is this the return of the concept of synchronized global growth?

Before we get there, there is still the overhang of broad trade conflict across a multitude of fronts, the unwelcome strength of the stronger U.S. dollar, plummeting emerging market economies and the still-flattening yield curve that Boston Fed President Eric Rosengren would have you not worry about. By the way, any indicator that bats near one thousand, I tend to worry about.

I can't defend you from everything, because I cannot defend myself from everything. The best offense has always been a good defense -- and that's still true. I will not be as timid in the marketplace as brave old Uncle Louis, nor as fearful as the millennial generation who came of age at a poor time, but I will be diversified, across sectors as well as across asset classes.

Risk tolerance is as individual as a favorite color, or a favorite ice cream flavor. It's up to you. Physical gold, to me, seems cheaper right now than it should be. Is this a good time to increase exposure if one is under-exposed? Perhaps. In addition to equity and debt, does one have enough cash stowed, not in a strong box, but in an interest-bearing account? This, for the junior investor is a number one priority, and in my opinion.. comes first. You can not fix a leaky roof tonight, without a liquid store of wealth available to you tonight.

Though here in the U.S., the banks won't kick off earnings season for another month, as this week plays out, we'll deal with not only headline news on trade, but also data on consumer level inflation, retail sales, inventory building, and industrial production. In other words, this is a huge week for economists. Not to mention that in addition to Wednesday's Beige Book, there are enough Fed speakers out and about to spook the marketplace.

In closing, don't fear the environment. Fear will paralyze. I try to preach adaptability. I try to preach cost-basis manipulation. That is how I do this. Most folks are not great stock pickers. Every single one of you has the ability to be a competent manager. Agility is key.

It's that time again. Cupertino, California. The town that nobody my age ever heard of until they were already well into adulthood. The excitement builds. Scuttlebutt has it that Apple (AAPL) will introduce three new iPhone models. Rumors abound that the three will include a 5.8 inch, and a 6.5 inch OLED screen, as well as a 6.1 inch LCD screen. Don't look at me. I wouldn't know an OLED screen from a screen door, but I do know how to read a chart. It's obvious that investors have run the stock up in anticipation of this event, and then it is just as obvious that concerns over trade have impacted this name over the past week.

Oh, there's talk about a new smartwatch, new air-buds, and even a new laptop, but let's get back to this trade issue. On Friday, Apple filed with the U.S. Trade Representative in some detail, potential damages that the firm, and ultimately the U.S. economy (citing higher consumer prices) could experience as a result of the president's proposed next tranche of $200 billion in tariffs on imports from China. Apple, for those unaware, manufactures most of the firm's products in China -- including the various iterations of the iPhone.

The Wall Street journal reports that 10,000 people work directly for Apple in China and that indirectly, the firm creates a rough 3 million Chinese jobs. The president responded on Saturday. Obviously, the president wants those jobs moved to the U.S.. Where this goes, creates an uncertainty for shareholders. Apple has pledged to contribute $350 billion to the U.S. economy over five years, thanks to the change in corporate tax law implemented for this year. Foxconn, a Taiwanese multinational electronics manufacturer and a large Apple supplier, has already committed to a new $10 billion plant in Wisconsin. That plant is not currently slated to produce for Apple. I am sure that the president has his eye on this. For now, I'll rely on the year-to-date chart for guidance. 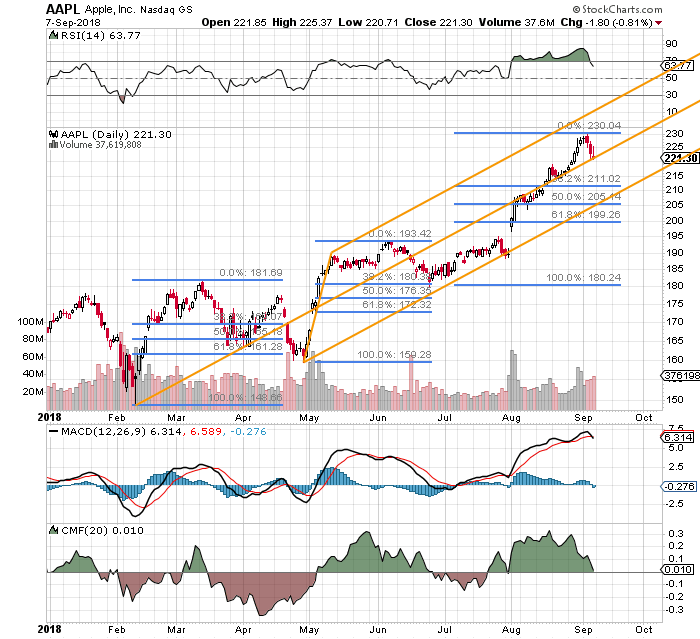 Last week, momentum for this name finally turned, after an incredible August run. Still, even at current levels, trading at just 16x next year's earnings, the stock experienced a turn lower for the daily MACD (the 9-day EMA actually went negative), Money Flow (threatening to kiss zero), and Relative Strength (finally leaving a condition of being technically overbought).

What's easy to see on this chart is that the name has regularly responded to pressure at, or just below standard Fibonacci retracements. What's also plain to the experienced eye is that the algorithms trading this name have maintained the central trend line of a nearly eight-month-long Andrews' Pitchfork model as a pivot. This means largely that this line acts just as much as a gravitational force as it does as support or resistance.

My thought is that given the current state of two-way headline risk regarding Apple equity, one is better off not adding exposure in either direction close to the last sale. My feeling is that President Trump and Apple CEO Tim Cook seem to have a more amiable relationship than does the president and a lot of other tech CEOs. This guarantees nothing. All it does do is support the notion that in general, the trend for AAPL remains intact over the long haul. The firm also has quite a captive ecosystem that keeps customers coming back and keeps them paying up. The firm's Q4 earnings are not due until October 30. Bear in mind that the average target price for AAPL across the industry is $219.82, down $1.48 from Friday's close.

There really is no telling where AAPL will open this morning, and where it will go after. The event in Cupertino this week could potentially act as a positive catalyst while any rhetoric between the president and Tim Cook could be a short-term negative, in my opinion.

I am already short some AAPL November put options. My thought is, given the potential for an increase in the value of some of these premiums today, I will likely be adding to these positions, carefully. I do not want to get over-extended in the space, but....

Get an email alert each time I write an article for Real Money. Click the "+Follow" next to my byline to this article.
TAGS: Regulation | Economic Data | Economy | Investing | Markets | Politics | Stocks | Technology | Global Equity | Newsletter

GE Is a Tale of Two Trends

Here's what the charts and indicators are pointing to.

Veeva Systems Has Dropped out of the Clouds: Look Out Below

Traders are voting with their feet.

The quartet consists of a tech giant, an entertainment behemoth, a semiconductor producer and a toolmaker.