The yield curve has been on minds of many these days. Folks wonder whether the curve will invert, by how much and if it will project to a recession.

History tells us when the curve inverts a recession is likely. The inversion mostly happens when the Federal Reserve raises rates too far on the short end of the curve to help stifle inflation that may get out of control.

But the Fed historically has been a staunch inflation fighter. Indeed, the record is pretty good for the past 39 years, since former Fed Chairman Paul Volcker snuffed out double-digit inflation. We have never come close to those levels since, and perhaps never will.

Regarding the current situation, the yield curve is flat now, though in a few weeks the Fed is likely to raise interest rates for a third time in 2018, bringing the funds rate to 2.25%. It may raise rates one more time this year, but that is on the fence. That likelihood is not alarming, as we have seen some inflation coming into the system. Make no mistake, inflation is the enemy of currency and fixed income, but the Fed has wanted this gradual rise in rates to happen for some time.

But is inflation out of control and going to force the Fed to raise rates further than expected? Three things tell me no. They are the 2-year yield, TIPS (Treasury Inflation-Protected Securities) and gold.

Let's talk about the 2-year bond, which basically mirrors inflation expectations. We see from the chart (below) the ramp-up in this yield over the past year to 2% plus. However, Friday's job report showed an increase in wages, and the yield rose to multiyear highs. 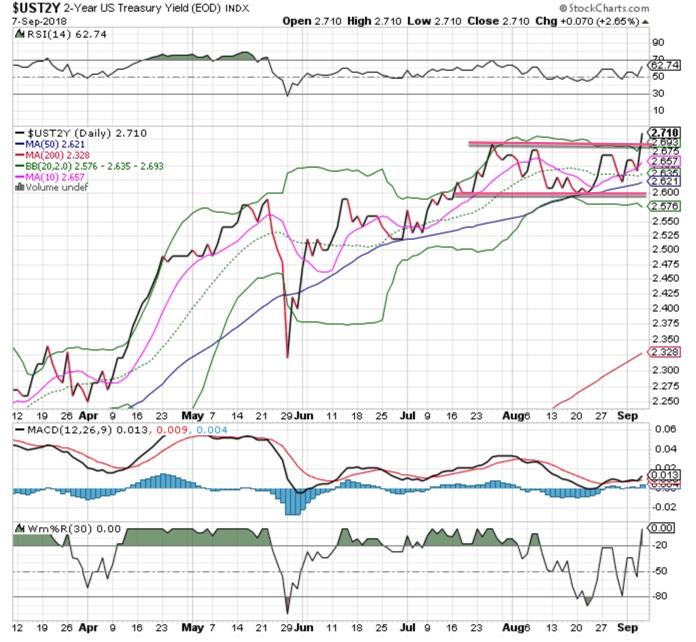 This is a good situation for both the Fed and the economy -- for the Fed to take back the generous accommodation since the financial crisis, and for the economy to grow with little inflation.

Notice the chart of TIPS (below). These instruments peg the consumer price index (CPI) and will rise when inflation rises. These bonds are not running out of control, hence inflation is contained. 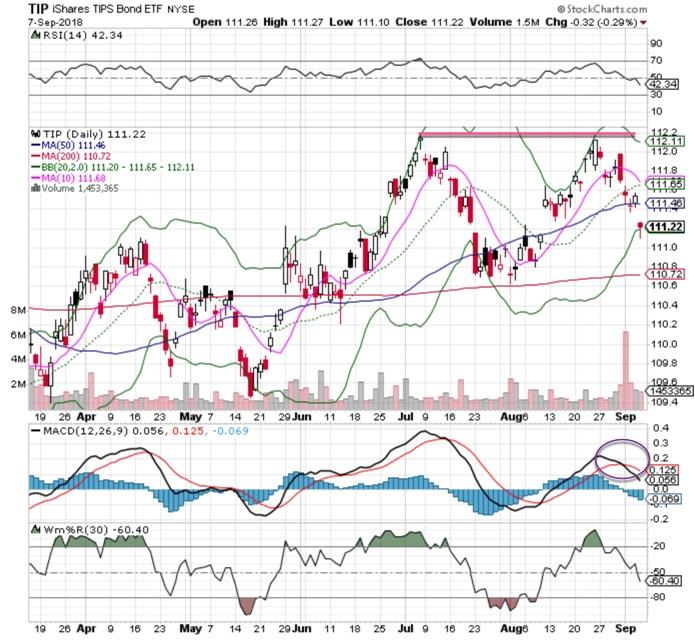 Lastly, gold is floundering around $1,200 an ounce. Historically, gold has been an inflation hedge against the dollar. That has not occurred here, and frankly there is more interest in dollars than the relic metal due to economic strength in the United States.

So we have a good situation here, though it requires constant monitoring, with the Fed focused on the data -- as we should be, too!

Get an email alert each time I write an article for Real Money. Click the "+Follow" next to my byline to this article.
TAGS: Fixed income | Investing | Treasury Bonds | Rates and Bonds | Markets | Financial Services | ETFs | Funds | Economic Data | Economy | How-to | Risk Management

Here's Why I Initiated a Position in Evercore

I continue to put my remaining cash into equities only on big down days and only via covered calls.

The charts of PAYX are mixed.

The Charts of Principal Financial Group Need to Bottom

PFG has made a serious price decline but potentially there's some good news.