In my last column, I tried to draw a few long-range conclusions about U.S. production of shale oil, using the terrific graphics from Enno Peters of Shaleprofile.com. In this column, I promised to focus on the kind of oil company you'd want to invest in, based on those conclusions. If you haven't seen those representations of shale production from the Bakken shale play and the Eagle Ford, I invite you to take a look: 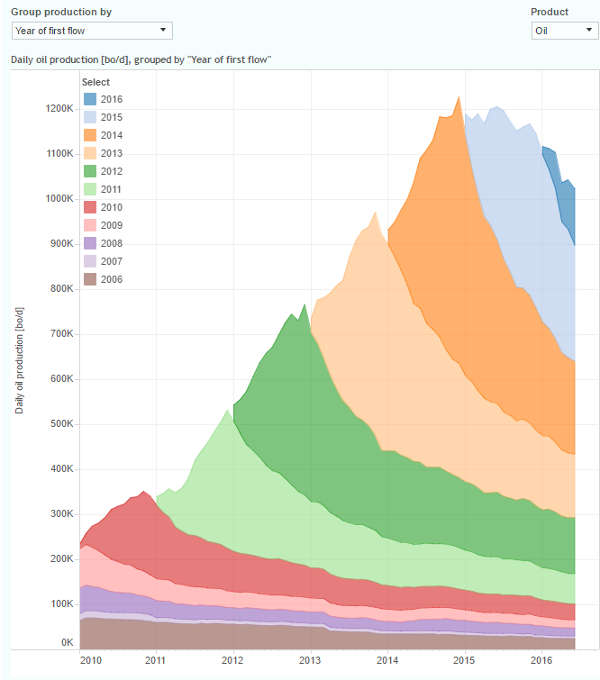 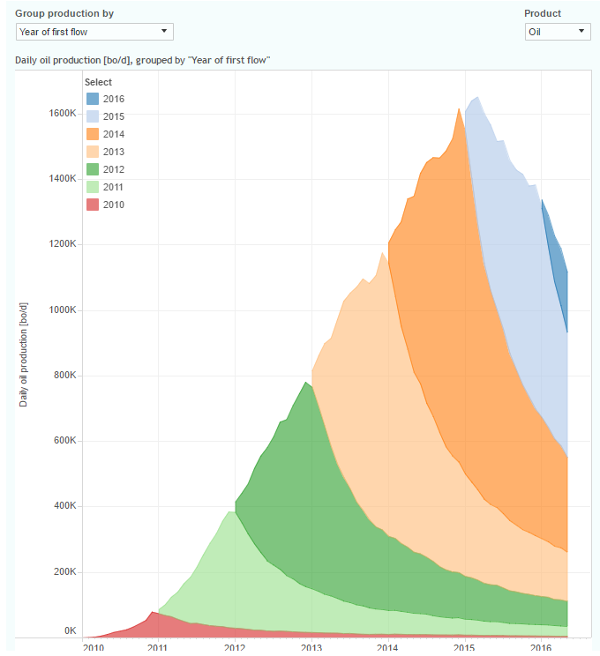 The fantastic color coding of the chart not only makes clear the total production of oil, but also when each part of that production was initiated, and how efficient the wells from each year have been.

One fundamental idea is that as each year goes by, a percentage of production must be re-initiated in order for total production to remain the same and a logically greater percentage in order to increase production, as has happened in every year except this one.

I know this is obvious, but it bears repeating, and these charts scream it out: Oil wells cost money to drill and inevitably run dry. They need to be constantly replaced with fresh drilling to maintain output. Those drilling and maintenance costs sometimes overwhelm the returns of the oil being sold, as is the case this year and the previous two, and sometimes greatly outpace them, as was the case before the bust in 2014. We know that most of the independent U.S. oil companies operating in shale have bypassed this current cash-burn problem in the short term by raising efficiencies -- which lowers costs -- and by slashing capex, which sacrifices the ability of potential future replacement.

I have argued in my last column and elsewhere that efficiencies are a very helpful cost tactic but one of continually lessening returns -- there is only so much oil to be retrieved from a well -- and other charts I supplied from Peters' website show that these limits are already close to being reached. I also argued that capex slashing would limit the amount of future oil that would be coming from these two major shale plays, no matter how high oil prices might get.

With all this in mind, and as we move through this (relatively) limited time of low-priced oil, our job as investors (and my job specifically) is to find oil companies that are capable of three things:

It happens that very few U.S. independents manage, in my mind, come close to fulfilling even one of these requirements, let alone all three, which would indicate a solid and very profitable long-term investment. It is tough sometimes to argue fiercely, and alone, that oil is destined to return above $100 a barrel by the end of next year, yet also argue that only a few stocks still represent a value investment based on that prediction right now.

As oil retreated earlier this month toward $40 (as we predicted), we thought we'd find oil stocks that meet all of our criteria again, as they did in the early spring when we bought shares of EOG Resources (EOG) , Cimarex (XEC) , Hess (HES) , Continental (CLR) and Anadarko (APC) . In all of those issues now, as oil recovers toward $50, it is the stock price -- No. 3 on our list -- that has disappointed us. All of these names are overvaluing their possibilities and undervaluing their likely challenges in the coming months and year, making investment in them today difficult. We still hold some shares in all of these, but will refrain from adding to any of those positions right now. That will, I believe, change again -- and if it doesn't, I won't feel bad about missing an opportunity with what I think is a very limited upside.

I want to specifically point out EOG Resources, which invested $2.5 billion in buying Yates Petroleum last Tuesday. This bold move from EOG looks sharp on the outside, moving its priorities from the less-robust Eagle Ford Shale to the super-hot Permian. But not every movement toward Permian acreage is necessarily great, despite the white-hot enthusiasm in this lone play. Yates has been distinctly underwater and strongly cash flow negative during 2015 and 2016, which is why this long-private firm was even available for acquisition. I know EOG believes it can work its efficiency magic with Yates acreage in West Texas, and it will surely do better with it than Yates -- but I am not on board with the current rush to buy shares here above $95. Better values in oil exist.

Indeed, I continue to believe that, at this point in the cycle, much better values lie in natural gas stocks, and we'll talk about some of those opportunities in my next column.