Shot Heard Round The World

Much was made of yesterday's 168-page report released by JP Morgan. marking the 10th anniversary of the 2008 financial crisis. The report is a collection of opinion and perspective from 48 different qualified folks at the bank. One, however, stood out as a stark warning. That one is thought of as the firm's top quant entity, He is Marko Kolanovic. What Kolanovic warns is that several factors combined could eventually lead markets, and eventually the public, back to a much darker place.

I happen to agree with a lot of what Kolanovic puts forward. He warns of a great liquidity crunch. Not realistic right now, but hear me out. The FOMC has been steadily increasing short-term interest rates. We expect that in three weeks, they will ramp the Fed Funds Rate up to 2.25%, and then perhaps 2.5% in December. Next month, the Fed will also take their "quantitative tightening" program up to $50 billion per month from the current $40 billion. On top of that, by year's end, if everyone stays on track, for the first time since the financial crisis began, global central banks will be adding absolutely zero liquidity to the economies of planet Earth. Hmm.

Some mention that the U.S. economy is so strong, and that if it is so strong, then why are stocks (S&P 500) only up a rough 8% this year. Perhaps the trap door of liquidity is already in motion. Bear in mind that the S&P 500 now trades at 16.9x next year's earnings. This is down from 18.3x on New Year's Day. So, the market has rallied 8% while stocks have in essence been devalued by 7.7%. Sure makes equity performance a whole lot more impressive if you think of it like that. Sure puts the onus for continued gains on the macroeconomic backdrop, corporate execution, and finally, the U.S. consumer. What could possibly go wrong? Have you seen lackluster vehicle sales, or the waning growth across housing markets in recent months? Now tie that in with lower valuations for equities. Ahh... now you get it.

Several regional Federal Reserve district presidents have already warned on pushing short-term rates much higher. Without increased, and concentrated, effort of behalf of the U.S. Treasury on long-end (and expanded) issuance, pushing up the short end will only be akin to pushing on a string. The long end will not move, and the result will be an economic recession. Don't believe me? Think the Fed have never put us in this position before? Good luck with that.

The problem for marketeers will come on the day that an outsized event serves as catalyst. Kolanovic correctly, in my opinion, points out the dangers of automated trading and the growing popularity of passive investment. There was a day where your floor trader reacted in minutes, not micro-seconds. That trader might walk away from making a trade that seemed to him or her like a rip-off. The open outcry market model required a specialist that was required to act as a referee when a crowd got out of control. Those specialists, through mandated affirmative-obligation, were required to enter the marketplace contra existing order flow when not enough supply or demand existed in real time to properly pair off agency orders at the point of sale.

These days, it is one algorithm versus another, and may the faster execution win. The time-tested methods of price discovery have been perverted with the rise of flash executions in small lots -- and not to mention dark pools that intentionally impair transparency.

Somehow, speed ended up being rewarded more so than quality of execution. Oh, the exchanges themselves have circuit breakers, but they are spread out significantly. As for passive investment, I am sure that you have noticed what has happened to the tech sector this week, and conversely what has propelled the industrials, materials, and defense names. Call it a "flash rotation" if you want, but it is real, it is dangerous, and you must be prepared ahead of time, because it will be too late to act once you realize that you even needed to. Ever been sucker-punched? Takes more than a second to realize what just happened to you, and it hurts. A lot. Yeah, something like that.

The Philadelphia semiconductor index gave up 2.7% on Thursday. Ugly. Second rough day in a row for the group. Third rough day in five. What gives? Forget cheap valuations. Obviously, forward-looking earnings projections will either be changed, or missed. Perhaps the Citi Global Technology Conference in New York did not go as well as investors (including your author) had hoped.

Micron (MU) CFO Dave Zinsor mentioned higher required capital spending, despite the firm's efforts over the past two years to control expenses. Keep in mind that Micron sells memory -- and DRAM is worth much more to the firm in terms of profits than is NAND. According to TrendForce, DRAM prices stopped growing in August.

Micron reports its fourth quarter on September 20 -- in less than two weeks, gang. Obviously, this will be covered. Word is that industry expectations are still for 20% growth in shipments for the year. I am long Micron, as I am sure that most of you know if you read me. I have added shares over the past two days using the proceeds from my liquidation of my Alphabet (GOOGL) stake. I still have some dry powder here, but I really am not at all sure how much more risk I want to pile into this name.

That brings us to KLA-Tencor (KLAC) . Yikes. KLAC CFO Bren Higgins, at the same conference sees the current quarter as a "trough" for shipments, and warned against expectations for a significant rebound in the December quarter. In fact, Higgins warned that second-half shipments could be flat to down versus up a few percentage points.

I am also long this name, though fortunately I did take half of this position off prior to September as part of my regular housekeeping. Cash levels had simply fallen below my standard. I did not see this negativity coming for this name. Simply saved by time-honored discipline. Not the first time. That still means, however, that I still have enough to worry about with this one, and this news is a game changer.

All of these wonderful headlines, compounded by Robert Baird's Tristan Gerra who made negative comments and lowered that firm's price target for Micron from $100 to $75, also had the effect of putting the whammy on one of my other names.. Lam Research (LRCX) . Thank goodness I hold all of those defense and aerospace names that we so often discuss, or yesterday could have been truly disastrous. I took an early profit on the LRCX, but added those shares back to the portfolio ahead of yesterday's beat-down, so while we did successfully extract some capital from this name, we are now giving it back. What to do now? Question easily answered. No. Not really.

If you've been in these names for a bit, you are probably still above basis, though you may have surrendered much of your profits if you have not taken any action. As I have admitted, I am currently below basis in LRCX, but that is through my own poor financial engineering. I am still fine as far as MU and KLAC are concerned, maybe not as far as my daily P/L is concerned, but certainly as far as the IRS might be. 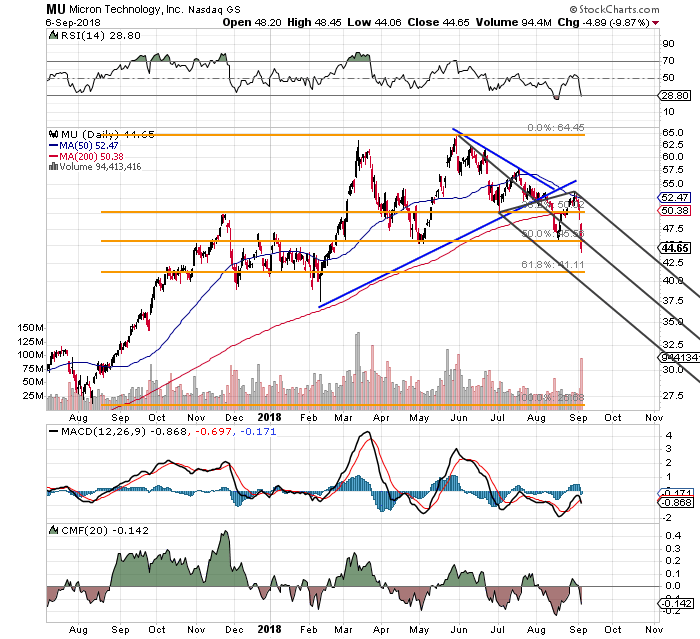 As you can see, the nature of this chart has changed dramatically this week. I am running with about 80% of my intended long here, but I did add half of that this week, so I'm not really feeling the pain yet, and I still do have some dry powder. As you can see, the daily MACD, the RSI, and Money Flow have all gone south with the stock. I had previously told you that if that "blue" wedge closed that there would be violence. Well, there was indeed, just not in the direction that I had thought.

My next spot is $41. That is where I intend to add the last one-fifth to my intended size for this name. My own tolerance for this stock ends there.

My Plan For Today:

By making both of these sales, the trader can reduce net basis by a potential $1.66. That's not too shabby. The trader may end up having to eat the shares at $41, but would have already reduced that net purchase price by more than 4%. The trader may also have to "take profits" at $50. Wouldn't that be nice?

I am down to 50% of my long position as far as KLAC is concerned. I took a 9.3% profit on the first half, and the last sale remains above my original basis. Still comments made by the firm are so darned negative. I will watch this name for this morning. I may or may not act. 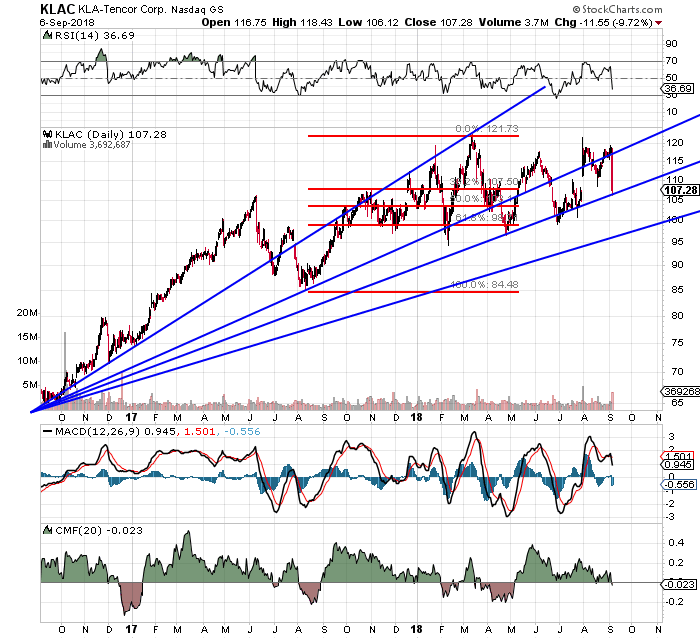 Obviously, to keep me interested, this name needs to bounce off of that second Fan line. That line has performed as support twice in the past. However, I am not willing to give back the profits already taken, and if I see a last sale below $106, I am so out of here. 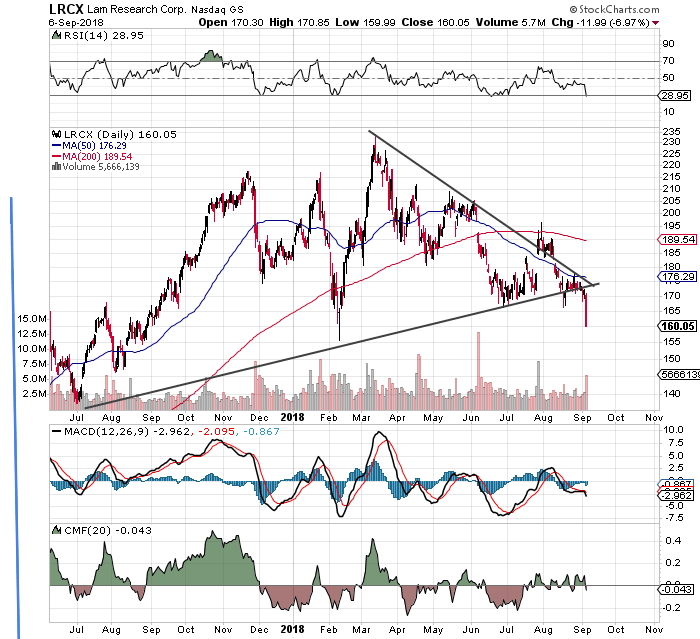 What do you see? I see the same closing wedge that broke on the Micron chart, that's what I see, I was down to a 20% stake in this name, before adding back enough shares between $165 and $172 to get back to 50%. The profit form the earlier sale is yesterday's news. Here I have a problem. On any kind of rebound (Broadcom (AVGO) can save us all, right?), I will likely look to wiggle my out of these recent purchases, even at a controlled loss.

I would love to hear what CEO Martin Anstice has to say about all of this, but the firm does not report until October 15, and I am not that willing to stick my neck out for six weeks. The October 19 $145 puts still paid $2.53 last night, and that's not really too bad. I am just not sure how willing I am to expose myself to potentially increased equity risk right now. I think I would rather just put myself in position to take a pedestrian profit through the sale of covered calls, perhaps the October 19 $175s. Those still paid $2.33 as of last night. Fork in the road. The choice is ours.

Get an email alert each time I write an article for Real Money. Click the "+Follow" next to my byline to this article.
TAGS: Investing | Global Equity | Regulation | Markets | Technology | Economic Data | Earnings | Economy | Newsletter | Politics