Sanofi SA (SNY) has moved sideways the past four months, in a bullish-looking consolidation pattern. As prices inch up to the highs around $50, we want to look closer at the charts to see if SNY can make an upside breakout now or if the bulls will be frustrated.

In this daily bar chart of SNY, above, we can see a rally starting back in October. A three-and-a-half month consolidation follows before renewed strength in February until mid-May. From May until now, we see another consolidation pattern. Prices are above the flat to declining 50-day moving average line and above the rising 200-day line.

The daily On-Balance-Volume (OBV) line shows a bullish pattern of aggressive buying from October to May and then only a modest decline until early August. The trend-following Moving Average Convergence Divergence (MACD) oscillator is above the zero line for much of the past 12 months and is currently in a bullish mode above the line.

In this weekly bar chart of SNY, above, we can see that prices are above the rising 40-week moving average line so math tells us the longer-term trend is up. The weekly OBV line shows a bullish trend since early 2016, so we have a longer-term pattern of aggressive buying. The weekly MACD oscillator turned bullish in February of this year and looks poised for a new bullish crossover. 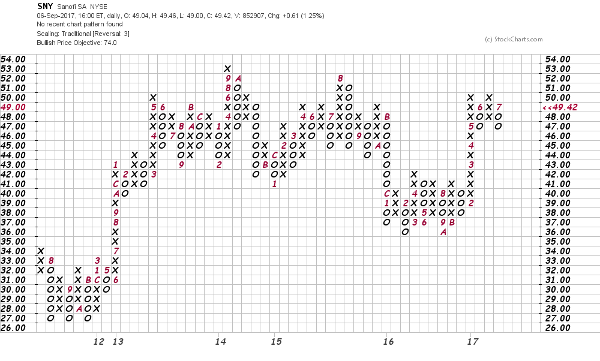 In this longer-term Point and Figure chart of SNY, above, we can see that a trade at $51 will be one breakout and trades at $53 and $54 will also be breakouts. A longer-term potential price target of $74 is projected.

Get an email alert each time I write an article for Real Money. Click the "+Follow" next to my byline to this article.
TAGS: Investing | U.S. Equity | Healthcare | Risk Management | Stocks