Vale S.A. ADRs (VALE) look to be headed to new highs. VALE made a "V" bottom in early 2016 and the rally does not look to be over. Let's look at the latest charts and indicators to suggest a strategy to capitalize on higher share prices in the weeks ahead.

In this daily bar chart of VALE, below, we can see the price action of the past 12 months. There is a strong rally from $5.00 to around $11.50 followed by a four-month correction to the $8.00 area. From a June low prices have rallied back to the highs faster than the decline. Prices are above the rising 50-day moving average line and the rising 200-day line. Just last month the 50-day line crossed back above the 200-day line for a bullish golden cross.

The On-Balance-Balance (OBV) line confirmed the rally from last September to February. The OBV line did not decline much to the June low, telling us that selling of VALE was not aggressive. The OBV line has risen again the past two months and again its strength indicates that buyers of VALE have been more aggressive. The trend-following Moving Average Convergence Divergence (MACD) oscillator has been above the zero line since early July -- a bullish configuration.

In this weekly bar chart of VALE, below, we can see that prices are above the rising 40-week moving average line. The weekly OBV line has been rising since early 2016 and its long rise suggests strong and steady accumulation for many months. This is very bullish, in my opinion. The weekly MACD oscillator crossed to the upside in July for a fresh outright go long signal.

In this Point and Figure chart of VALE, below we can see a breakout on this method of charting and a price target in the $14-$15 area. 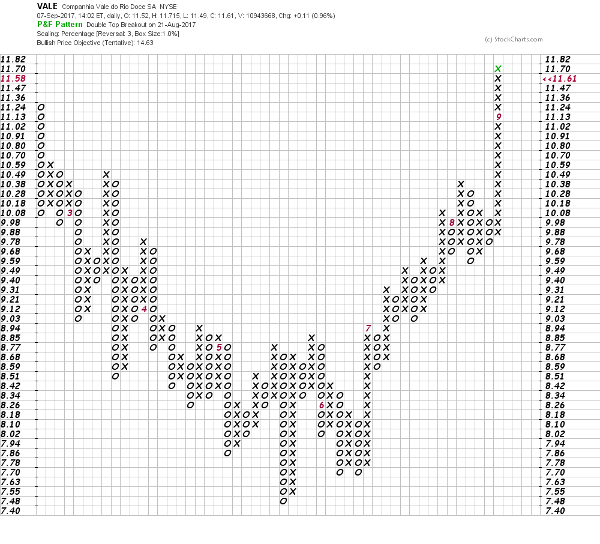 Bottom line: It looks like VALE is heading still higher. If long, hold and raise your stop protection. If not long I would enter here and risk below $10 looking for a move nearer to $15.