The most interesting part of the entire trading day was not that Washington managed to kick the can down the road for three months on the debt ceiling, but that there was some bad news for several transport stocks yet the transports stayed positive all day.

We started the day with words of caution on earnings from CSX (CSX) , and from United Continental (UAL) as well. And, of course, the awful news from the hurricanes hit the airlines with force. Yet the transports hung in there all day. When bad news can't take them down, I like to pay close attention because that's not bearish.

It's a down-slanting neckline, but the transports have the chance to be a head-and-shoulders bottom of some sort in the coming weeks. Getting over 9400 would be key.

We still have the overbought situation to contend with, though. It will take several down days in the next week or so for us to see the oscillator back at an oversold condition. But as you can see, it is clearly heading there. In other words, we're working off that extreme overbought reading from late last week.

With all the hurricane news, oil is back in the news, so I thought it was time to revisit the oil chart. As a reminder, my view on oil has been that we would mostly see it in a large trading range. When it broke down in June, I said I thought the breakout (down) would be temporary and it was. Why? Because there were far too many folks negative on it.

It is true there is the potential for a head-and-shoulders bottom in crude oil. And it sits at a long-standing downtrend line. But my view hasn't changed. I think a breakout over that line would bring out all sorts of calls for much higher targets, and in the end those old highs from earlier in the year are likely the limit (mid-$50s). Depending on how you measure the head-and-shoulders pattern, it would only measure to the mid-$50s. So with all the positive voices on oil, my guess is sentiment will turn very giddy if oil can get over that downtrend line. Watch sentiment if that happens. It could be the inverse of the July low. 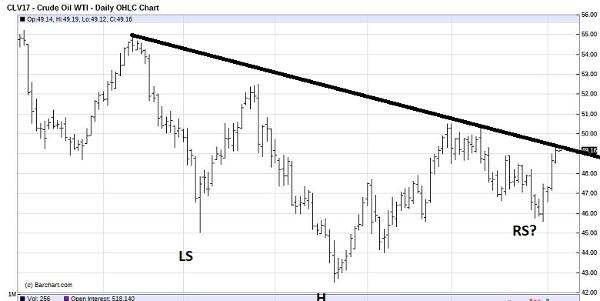 For those in the path of the upcoming hurricanes, be safe.