Maybe the bullishness in the markets will finally bleed back into biotech. Between pricing and the odds of a Clinton victory, the struggle is very real. July served as a recovery month, reinforcing the $240 area as support.

August hasn't been as rewarding. Rather than reinforcing support, it has reinforced resistance at $300. We could be ready to retest $300 with just a few more buyers stepping up to the plate. Of course, if buyers fail here, we could be looking at a difficult fall. Yes, volatility in the biotech sector looks ready to rear it's ugly head, yet again. The big question is direction. 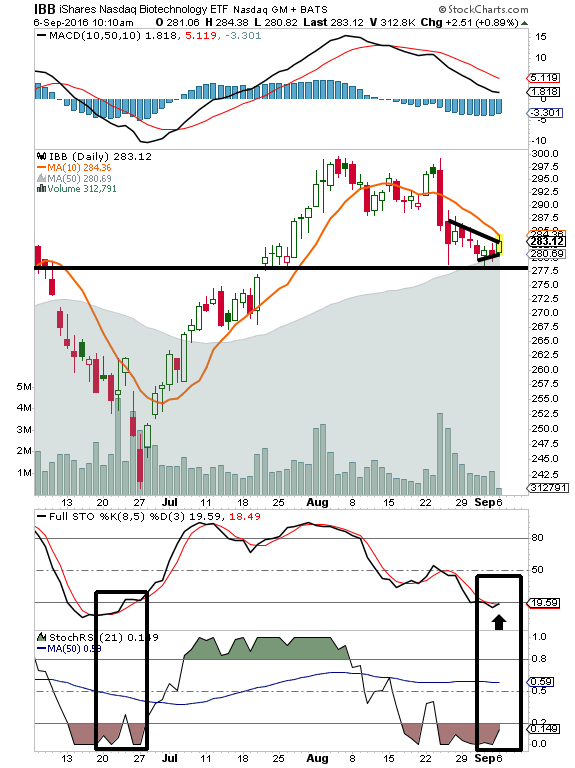 Examining the daily chart of the iShares Nasdaq Biotechnology ETF  (IBB) provides the points traders should focus upon. The 10-day simple moving average (SMA) coincides directly with resistance. A daily close over $284.50 sets us up for a quick pop to $290, with a follow through test to $300 very likely. A close under $280 leaves us in the precarious position of needing $277.50 to hold, or a trip to $265 is on the table. We'd lose support of the 50-day SMA and risk the 10-day SMA falling under the 50-day. When that happened in late June, IBB fell another $20 before finding a bottom.

The secondary indicators show signs of hope. While they are all oversold, we do have a bullish crossover in the Full Stochastics setting up while in oversold territory. This last occurred in June, and IBB pushed over 20% after the crossover. It didn't mark a perfect bottom, but it was close.

As for the very bearish Moving Average Convergence Divergence and StochRSI, they may not be as great a concern as they appear on the surface. Both indicators were just as bearish back in June, before the big move higher. 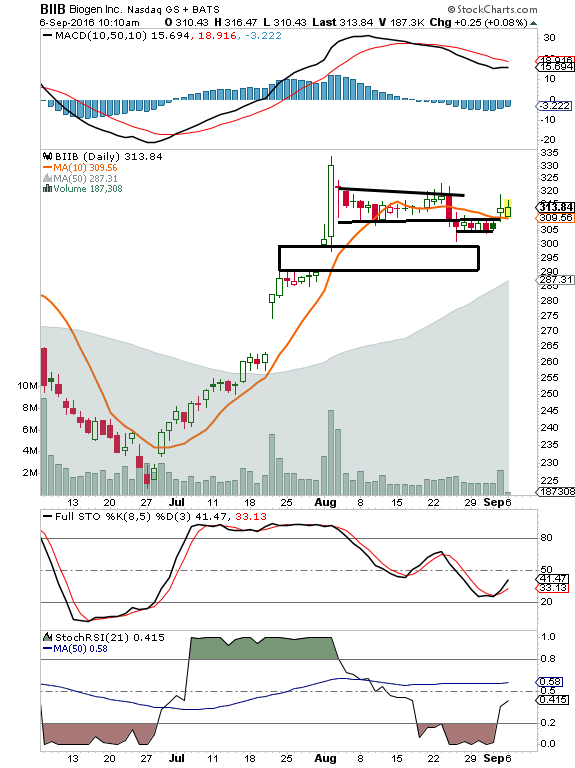 If a trader wants to focus on a name with strength leading the IBB, then check out Biogen  (BIIB) . The Full Stochastics crossover is already in place, the StochRSI is no longer oversold, and the MACD is turning higher. Price pattern is a bit different, but a tight stop at $310, or slightly looser stop at $305, translates into a similar risk as IBB -- assuming we eliminate gap risk.

The stock is above its 10-day SMA -- and well above its 50-day SMA, which is bullish. In my experience, the biggest drops in a name come when the stock is trading under important moving averages, not above them.

This isn't a sector for the faint of heart, especially this year. But there are some signs of life and clear levels on when investors should pull the bullish plug.

Get an email alert each time I write an article for Real Money. Click the "+Follow" next to my byline to this article.
TAGS: Investing | U.S. Equity | Healthcare | Technology | Markets | Stocks