Crown Castle International Corp. (CCI) broke out from a consolidation pattern last month and remains in an uptrend. Let's see where prices may be headed for the real estate investment trust that owns wireless infrastructure and what risk points we need to be aware of in the weeks ahead.

In this daily bar chart of CCI, below, we can see that CCI has made a good rally from a small bottom in November. Prices rose with only small dips up to an early June high around $104. Prices declined in June and July, breaking below the rising 50-day moving average line and getting very close to the rising 200-day line. From a brief low below $94 CCI has rallied back to new highs. The daily On-Balance-Volume (OBV) line improved from mid-November until early June. June and half of July saw a correction and more aggressive selling from sellers of CCI, but the buyers of CCI came back in force from the middle of July. The daily momentum study in the lower panel does not show any bearish divergences.

In this weekly bar chart of CCI, below, going back three years we can see that prices are above the rising 40-week moving average line. The $105 area looks like it was a resistance zone and it could become support if CCI declined. The weekly OBV line shows a peak in July 2016 and a neutral pattern since then. The trend-following Moving Average Convergence Divergence (MACD) oscillator in the lower panel has turned upwards to a fresh go-long signal.

In this Point and Figure chart of CCI, below, we can see a breakout at $104.44. An ambitious price target of $138 is projected. 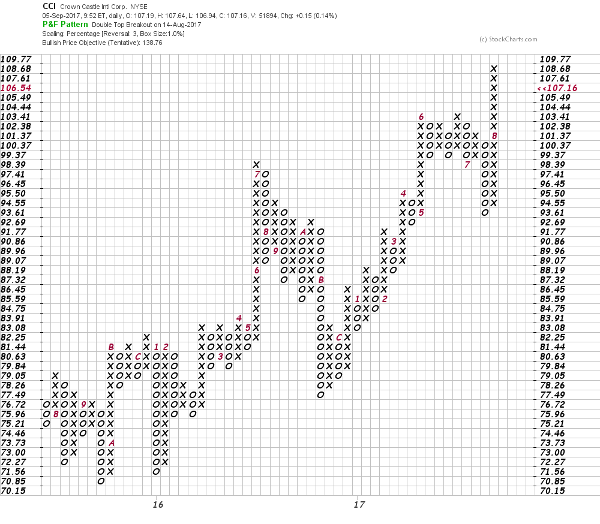 Bottom line: CCI could be considered extended on the upside, so a new period of sideways consolidation around $107 could be the next move for CCI. However, the strong rise in the OBV line since late July suggests that prices may not pause for all that long before new highs are notched. A close below $102 would upset the bullish case.

Get an email alert each time I write an article for Real Money. Click the "+Follow" next to my byline to this article.
TAGS: Investing | U.S. Equity | Real Estate | Telecom Services | How-to | Risk Management | Stocks