This past weekend as I was catching up after having taken a week off I noticed so many stocks had not participated in the rally. Just look at the charts of Ford (F) , International Paper (IP) and almost any oil stock to see that the rally was not as widespread as it should have been.

Yet the cumulative advance/decline line continued upward. Oh sure it came back down after midweek but all in all, it is still generally pointing up not down. This is simply not a negative as long as it makes higher highs.

My own Oscillator reached an overbought reading last Wednesday. It has come down quite a bit. If we saw a few down days we'd likely see it back to oversold quickly.

When we look at the Nasdaq Momentum Indicator we see that it too peaked on Wednesday. I have done some "what ifs" and walked Nasdaq up 200 points over the next week or so. As you can see, that doesn't deter the indicator from rolling over. Thus, we can say Nasdaq is overbought.

What of sentiment? The Investors Intelligence bulls are now at just over 59%. A reading over 60% is what I consider extreme. Therefore using this particular measure sentiment has moved from bearish in late June/early July to serious acceptance of the rally now.

I realize many will cite last year's 12 straight readings over 60% Bulls as a reason this shouldn't matter, but I also believe it shouldn't be ignored.

One reason it shouldn't be ignored is that last year the Citibank Panic/Euphoria Indicator wasn't into Euphoria and now it is. I don't have any back data on this so I'm sure there are plenty of times it didn't matter (like any other indicator, nothing works 100% of the time) but as you can see it doesn't move into Euphoria often so it is worth noting. 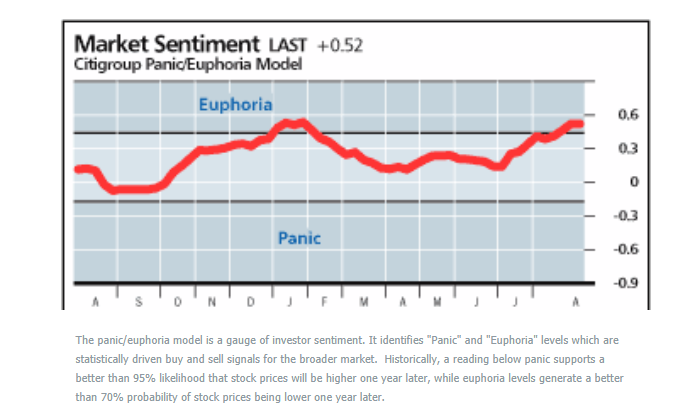 Finally, the 10-day moving average of the put/call ratio is now just a smidge under 90%. Typically once the moving average gets under there and then curls back up the market is considered 'too bullish'. It's always difficult to determine exactly when this indicator will curl back up but my best guess is late this coming week. And I suppose that makes some sense because those first few days of the month tend to be bullish for markets, don't they?

A pullback later in the week would be healthy since it would get the Oscillator back toward an oversold condition and would probably reign sentiment in.