It's More Than the School Bus

I think I've mentioned it in the past... Short weeks always feel long. By Friday, you'll likely agree. Even without a heavy slate of quarterly earnings releases bearing down on traders this week, and even with a full day head start on how much wood must be cut before ringing that second bell on Friday, the week, at least from a macro-economic perspective will pack both ISM surveys as well as data on cross-border trade, auto sales, and construction spending into a four day period that already contained the August Employment Situation.

If that's not enough, Wednesday brings the Citi Global Technology Conference in New York City, and Thursday... the termination of the public comment period for President Trump's expansion of the 25% tariff already placed on $50B worth of goods imported from China with an additional tranche of $200B worth of these imports. This will impact more than 6,000 goods in total, by the way. For those keeping score, we start this week with the Atlanta Fed's GDPNow forecaster for the third quarter tracking at 4.1%, with futures trading in Chicago implying that a third FOMC rate hike is 98% priced in for September 26th, and a fourth hike 69% priced in for December.

In addition, WTI Crude trades above $70 per barrel this morning despite continued dollar strength. The spread between the current yields of the U.S. two year notes and ten year bonds has mercifully expanded to more than 24 basis points as demand for the long end has softened a bit.

China easily leads the planet in the export of manufactured goods. According the Financial Times, last year China accounted for 35% of global clothing exports. Number two? Bangladesh at a very distant 6.5%. Vietnam, which has been my on again-off again hedge versus trade war fears, came in third place at 5.9%. The retailers just had what can only be termed as that group's best quarter, and many firms offered perhaps the most optimistic forward guidance in aggregate that we have seen in a very long time.

Still, the possibility, or even likelihood exists that many of these firms will suffer some margin compression, as not only the U.S. administration moves ahead with this next tranche of tariffs (which only directly impact wholesale trade), but also as these retailers slowly test consumer resistance to higher price tags. Remember that less than half of all the firms that mentioned tariffs in their Q2 earnings calls, even mentioned passing these costs on to the consumer. I do not expect to see a lightning bolt of inflation at this level, but something more like a trickle.

The best positioned firms, in my opinion will be those that saw that glaring light at the end of the tunnel, and prepared just in case it represented an oncoming train, and not daylight. Those firms that started to rethink and rework supply chains, even if just in case, will best be able to adapt. I believe that Nike (NKE) may be ahead of the curve on this issue.

Yes, I know that Nike made news this weekend with the renewal of their "Just Do It" campaign that will include activist free agent quarterback Colin Kaepernick. I had already been working on a Nike idea this weekend when I saw this news. I decided to plow ahead with my work, despite my wish to remain non-political. The first thing you might want to know is that I am an extremely peripheral pro football fan. My decision to stop watching the NFL on a regular basis was derived long ago, not for any reason except for the fact that I can not sit in front of a television, wasting what should be my more productive hours on any given Sunday.

That said, I will always stand at attention for my national anthem, and honestly usually have a fairly hard time not shedding a tear or two as the tune plays out. As for the protest, these players do have rights guaranteed by the Constitution that I have sworn to uphold. My oath comes with no expiration date, gang. This is a policy matter between employer and employee. My concerns on this are only about the stock's performance, and my feelings on that are purely mercenary in nature.

We know that while continuing to manufacture footware in China, that Nike has whittled the percentage of the firm's shoes made there to little more than a quarter of the whole. The firm has spread it's manufacturing wings to include Vietnam, Cambodia, and Indonesia. Was this foresight on behalf of Nike management, or was it simply a search for reduced overhead sourcing as the Chinese economy continued to develop? The point for us is nether here nor there. The point is that Nike is better prepared for this moment than are a lot of firms that rely heavily on retailing product that is manufactured in Asia, and already has several existing supply chains in place.

Nike runs on a different fiscal calendar than do a lot of other firms. After the afternoon bell on Tuesday, September 25th, the firm will release their Q1 numbers. In June, when the firm put their Q4 data to the tape, they posted stronger than expected results for both the top and bottom lines. Sales were very strong across Europe, the Middle East, Africa, China, and Latin America, not to mention positive growth in North America. In addition to the improved sales performance, gross margins also showed increases. The firm guided fiscal 2019 higher at that time, and perhaps most importantly announced a $15B share repurchase program.

The stock as you can easily see on the chart below, has had an excellent summer. Is it too late to get on board with Nike? The equity currently trades at 26 times forward looking earnings... expensive-ish. but mind you, I am not looking to get married, I am looking for a trade into earnings. Industry consensus for September 25th are for EPS of $0.62 on revenue of $9.91B. If these numbers are realized, this should be good enough for revenue growth of 14.2%.

While September is well known to be the roughest month of the year on average for equity markets, perhaps due to the difference in fiscal years, September tends to be a positive month for NKE. Tom Bowley mentioned in his "Trading Places" weekend note at Stockcharts.com that NKE turns in a positive September roughly 75% of the time, and that over the past 20 years, this stock has averaged a 6% increase for the month. Think I'm exaggerating? I Googled it. Sure enough, nearly every year, around Labor Day, somebody at a respected financial media site has published an article that discusses Nike's ability to buck the September trend.

Chart of The Day 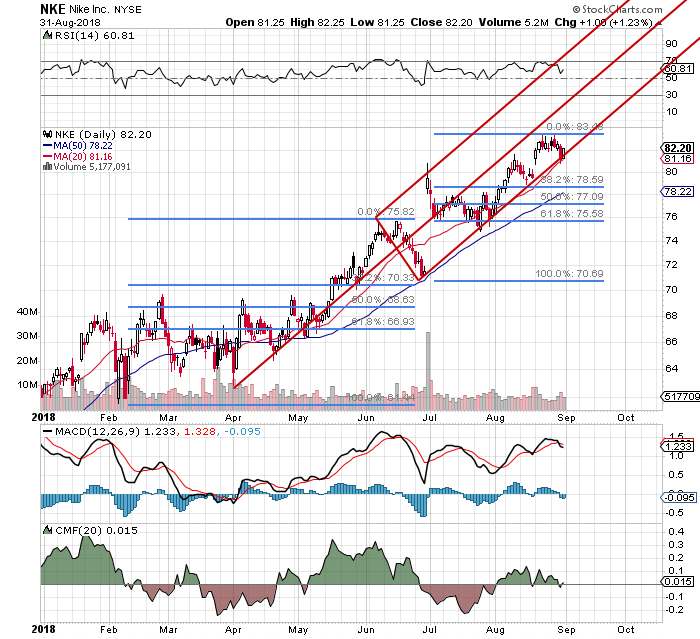 A couple of things stick out on the chart above. For one. this name increased in market price throughout August, and maintained an attractive level for it's Relative Strength Index despite not seeing significant support from Money Flow. You might notice that this stock hit stiff resistance over the past 10 days or so in the $83.25 area as the daily MACD has turned negative.

Mixed signals? Some. The last sale currently sits on the lower trend line of the Andrews' Pitchfork model that I've laid out for you. We should find out early this week if the buy point is that lower bound, or really somewhere in between the 20 day and 50 day SMAs. I've placed them on the map for you as well. The tendency of NKE to obey first level Fibonacci retracements of 38.2% leads me to believe that where I really want to buy this stock is below $79. Then again, if one can expect a 6% increase from the August last sale, that puts the stock at $87.13 in a month. Do I expect that kind of gain? I expect nothing, but I weigh probabilities using statistics, while managing risk. That's what I do.

A trader could wait, and hope to capture market pricing below $79, or with a little creativity, the same trader might...

Worst Case: The stock sells off hard, trading below $78 by expiration. The trader then ends up long 300 shares at an average net basis of $78.77, still below where I think the name looks attractive based on my chartwork.