In a market that we recognize as being stretched, we have remained very disciplined in our investment strategy in energy stocks, sloughing off the winners we had in U.S. exploration and production (E&P) companies and waiting for another opportunity to reload on some of our favorites.

Sure enough, oil and oil stocks have begun to sag in the last several sessions, proving our discipline is paying off. If you're holding the type of core energy portfolio I am, it is dominated by sub-sectors of energy outside of E+P that have maintained their value in the mini-downturn. For me, that includes an LNG play, Cheniere Energy  (LNG) , a fledgling Permian player, Silver Run Acquisition  (SRAQU) , a refiner, Valero energy  (VLO) and one lone natural gas play, Southwestern Energy  (SWN) .

Out of all of these, including the E&Ps we will certainly circle back to, I'm going to spend the rest of the week trying to find a good level to add to my Southwestern position. It now looks like natural gas will be a faster responder to lowered production and increasing demand than U.S. crude will be. It also strikes me how relatively undervalued prices of natural gas stocks are, compared to what I think are the prematurely overpriced U.S. crude oil producers.

Seasonally, natural gas withdrawals will take a small nosedive into the summer months, but an intensely hot July and August have pushed back against this seasonal dip, and forecasters are expecting a particularly early and cold winter to impact the Northeast and Midwest. The end to El Niño in June alerted forecasters to the likelihood of a bitterly cold and snowy La Niña in its wake. The proof of this coming nasty winter, forecasters claim, is in the prevalence of hurricanes in the fall, two of which we are dealing with into this Labor Day weekend.

On the supply side, we are seeing an even more intense drop in the production of U.S. natural gas in the teeth of these demand challenges. Even with the low bar of recovery costs in the Marcellus and Utica formation, most of the larger natural gas companies are restraining capex and fresh well drilling until after a price recovery. 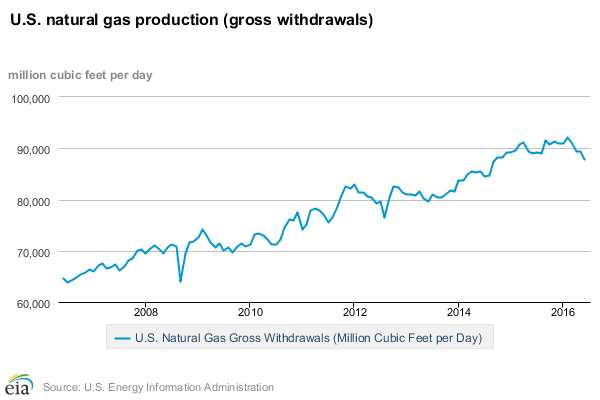 It is this production chart that is most stunning, as most observers (including me) had not predicted such a drop, expecting just the jawboning of disciplined strategy of restraint from the big U.S. producers, but not the realization of it. Instead, all of the major Marcellus players -- including Range Resources (RRC) , Cabot Oil and Gas (COG) and EQT Corp (EQT)  -- have, in fact, leveled their production, while watching other smaller players reel from extended low gas prices and the credit squeeze.

All this leads to a continuing of the opportunity in natural gas stocks of the U.S. independent "mini-majors" -- including my favorite, Southwestern, which has already performed nobly since I recommended it in early July at $12. Now that it's drifted again under $14, I think it's worth adding to this position, or even initiating a new one, if you don't own shares already.

Today is not the day to reload on oil producers. I'm taking a good look at adding to natural gas companies, instead.

Get an email alert each time I write an article for Real Money. Click the "+Follow" next to my byline to this article.
TAGS: Investing | U.S. Equity | Energy | Futures | Markets | Stocks