Perhaps the most important skill set necessary for those attempting to survive in any eco-system with a modicum of success is the ability to adapt. The financial marketplace is no different. One can never overcome even the slightest of obstacles if one never can adapt to a fluid environment. Never forget that all environments are fluid at all times.

Before one might even think about individual adaptability, the individual must be able to understand that all conditions in all situations are temporary, and then be able to identify where said individual can magnify impact. Got it? In that order.. understand, identify, then adapt. And only at that point, obstacles might be overcome. It is only then that we rise to a level worthy of victory or honorable defeat.

Part of the problem with market reaction to trade news is that keyword-reading algorithms react ahead of human response to any news item. Every time. Price discovery has become perverse. This is now part the complex, changing environment. Just this week, we have already seen a tremendous effort to renegotiate a NAFTA deal that has the backing of both the United States and Mexico. A deadline for bringing Canada on board looms today. That's not all. That's not even close to all.

Last night, the president threatened to pull the United States out of the WTO (World Trade Organization). The president has complained in the past that the WTO does not always side with the U.S. and sometimes infringes on rights of self determination. While President Trump rattles that cage, the comment period for U.S. plans to impose a 25% tariff on another $200 billion worth of annual Chinese imports is due to expire. This is an extension of the U.S./China trade war that the Chinese side will be unable to match dollar for dollar without getting creative. Oh, there's still more.

The president also rejected a European Union offer to scrap automobile tariffs, citing European consumer habits that lead to a greater appetite across that continent for vehicles manufactured on the continent. "Almost as bad as China." I believe is what President Trump said.

There Will Be Blood

Do not be surprised by the president's behavior. Ever buy a car, or some furniture? Ever purchase anything expensive? Did you pay the asking price? If you answer "yes" to that question, then reading this article won't save you from yourself. You have bigger problems. In any business negotiation, the customer is always right. I learned that as an 11-year old paper boy in Queens, NY. Ever screw up a big deal in your career? First question from your risk manager -- How good of a customer is this?

Guess what? In the realm of global trade, the United States is an extremely desirable customer. In fact, for most, we are their best customer. Think the still export-based Chinese economy can afford to sell significantly less manufactured goods across borders? Think that same Chinese economy can allow for a significant devaluation of U.S. sovereign debt? That's their book, gang.

Think EU manufacturers can afford to sell substantially fewer vehicles inside U.S. borders? Of course not. The winner, as always in tense negotiation, will be the one that the other side believes will walk. Perhaps, in order to save face, there will be minor victories permitted on both sides across several trade fronts. The only certainty will be uncertainty -- and I am not even going into the political climate in Washington. Oh, one more thing. The Volatility Index did not come in as equity markets rallied through late August, but did rise in response to yesterday's algorithmic selloff.

September looms. Financial markets may go higher. In fact, I think they will, based on macro-economic performance, as well as both corporate and consumer climate. But first.... there will be blood. Headline reading blood timed in micro-seconds. Fear? Fear is only for the wicked. A pragmatic approach to risk is required, and an understanding of how to manipulate net basis after initiation. Easy? No. Was victory ever supposed to be?

I screen the marketplace on a regular basis, looking around the fringes for opportunity. This one struck me as perhaps a stock recently on the rise that maybe should not be. I don't know, let's take a look. I know that you've heard of AMC Entertainment (AMC) . The stock closed last night at $18.80, which is good enough for a one-month increase of 17%. The S&P 500, FYI is up 3.1% over that time.

AMC trades at 49x forward-looking earnings. It has seen book value drop by 18.7% over the past twelve months -- and for you accounting majors, now runs with a Current Ratio of just 0.68. What that means to me, sports fans, is that these guys live with the potential of running into obstacles in meeting short-to-medium-term obligations. Not that they will, but they could.

The firm will report its third quarter on October 31. Expectations right now are for EPS of somewhere between $-0.40 to $0.45, down from $-0.33 for the third quarter of 2017. Revenue is projected to grow just slightly from $1.18 billion to $1.19 billion, suggesting to me some margin issues going forward.

Obviously the movie theater business lives at the intersection of both the "experiential economy" and the "stay at home economy." Both of these trends claim hold on the millennial generation. That said, there is no denying that the broader business has been in general decline. Thank Netflix ( NFLX) . So, why is this seemingly troubled name recently on the rise?

A third trend comes into focus. As the Movie Pass business continually evolves into something different for penny stock parent Helios and Matheson Analytics (HMNY) , both Cinemark (CNK)  and AMC have launched subscription movie-going type clubs. The AMC program is known as Stubs A-List -- and by all reports, it has gotten off to rousing start, landing 175,000 paying customers over the first five weeks. There is one other significant positive for this name, which as the stock rises could add to the momentum. Short interest. As of August 14, a whopping 28% of the firm's 50.88 million share float was held in short positions.

Short interest is a powerful factor, and can not be underestimated. Just look at how well short interest has acted as a buoyant force for another stock bearing grotesque fundamentals.... Tesla (TSLA) . That name continues to show resilience despite co-existing with a state of outright public ridiculousness on a regular basis.

One More Thing. Bloomberg News reported about two weeks ago that Amazon (AMZN) might be interested in acquiring the smallish Landmark Theaters, a chain of 56 indie-focused theaters. Does this mean the "Death Star" might be targeting yet another industry? You never know, with Jeff Bezos. Both Amazon and Landmark have declined to comment. 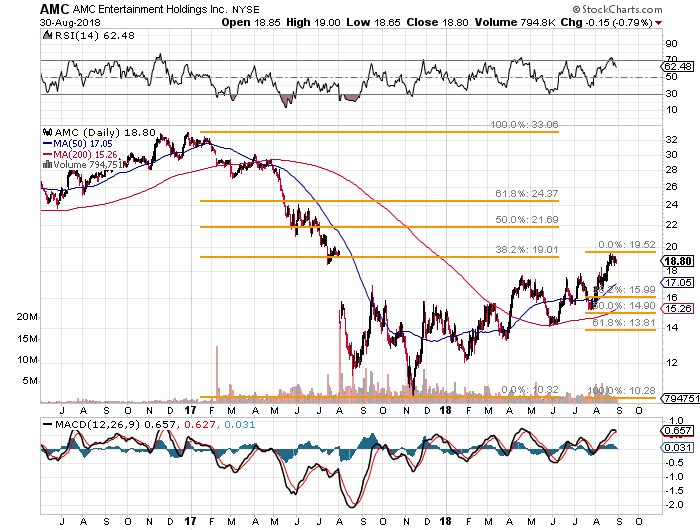 My thoughts are that though the name exhibits a year-long positive trend, the fundamentals are not there. Cheap stocks are not always inexpensive. Technically, I would think that this stock -- having already hit resistance at a 38.2% retracement of the precipitous fall experienced in 2017 -- will be see future gains as tough terrain to traverse.

I do not intend to invest in AMC. My instinct tells me that this stock is more than likely to trade at 16 before it ever trades at 21.

Author's Note: I have written enough for the get-away day of a three-day weekend. If you have made it this far, I thank you. Just be cognizant that when considering a name that I consider to be possibly overvalued at a seemingly low market price, I cam very close to writing about SNAP Inc. (SNAP) . Even at a last sale of $11.08, I don't like that one. Perhaps next time.

Get an email alert each time I write an article for Real Money. Click the "+Follow" next to my byline to this article.
TAGS: Entertainment | Earnings | Economic Data | Economy | Investing | Markets | Politics | Stocks | Global Equity | Newsletter

Kass: Pangloss I'm Not, But Here's Why I'm More Bullish Than Many

I'm mindful of the challenges of executing a soft economic landing, but the potential for the positive optionality of expected outcomes is expanding.

We're Still Dancing Around to Macro Matters From the Fed

We'll see how well things hold up today when Chairman Powell wraps up his testimony.

An Oversold Bounce Is Developing -- But Don't Be Too Trusting

Now is not the time to build longer-term positions.