Xerox (XRX) has seen some accumulation (buying) in the past three months. There probably was some buying from January until the end of May, but the increased trading volume and the sharp rise on the On-Balance-Volume (OBV) line tell me someone has become a lot more aggressive. A rising 50-day moving average line and a bullish golden cross adds to the mix.

Let's check our charts and indicators to see what is going on beneath the surface.

In this daily bar chart of XRX, below, we can see how XRX gaped lower at the beginning of the year and traded sideways in a tight range. Volume was relatively light and while prices stabilized, the daily On-Balance-Volume (OBV) line declined. Sellers of XRX were more aggressive from January to May but prices held their own -- I would take that as a sign of strength. From July the OBV line has risen strongly signaling aggressive buying and accumulation. The slope of the short-term 50-day moving average line has turned up and is now crossing the slower to react 200-day line. The crossing of these two averages in this fashion is called a golden cross and is considered bullish. In the bottom panel is the Moving Average Convergence Divergence (MACD) oscillator which has been bullish since June and looks to be poised for a turn to the upside.

In this weekly bar chart of XRX, below, we can see that prices have crossed above the still declining 40-week average line. The weekly OBV line shows improvement after over two years of weakness. The weekly MACD oscillator is almost above the zero line for an outright go long signal.

In this Point and Figure chart of XRX, below, we can see the price action going back to 2010. A rally to $35 will be a breakout and give us a first price target of $40. 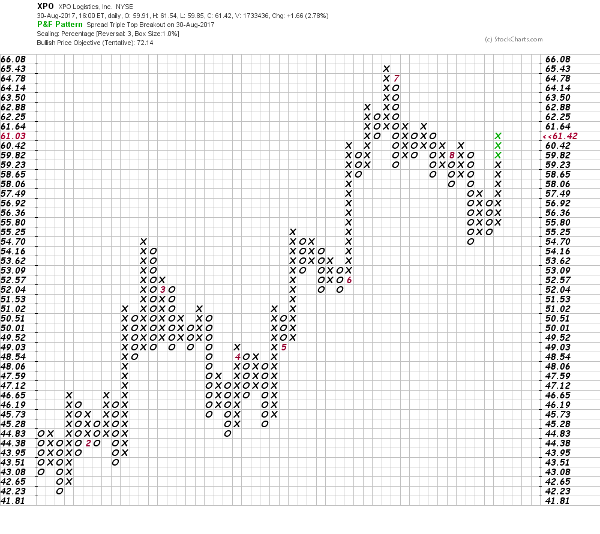 Bottom line -- I have no idea who or why shares of XRX have been bought but they have indeed been accumulated. Go long on a close above $33 risking below $30.

Psst: I've Found a Way to Break Into Intel

In the world of mega-cap tech stocks, this one can be played. Here's how.

We're Getting a FLIR-y of Bearish Signals

According to the charts, Flir Systems should only be bought on strength.