ServiceNow Inc (NOW) was covered back in late March, and we were cautious, saying that, "Price strength is needed to tell us the March correction is over. I would wait for a close above $90 to go long, risking to $83." It did not take long for NOW to close above $90 to get us back on the long side. Prices rallied into early June reaching $110 before starting another sideways consolidation pattern.

Recently buyers have returned to push up NOW to a fresh upside breakout. Let's check the latest charts and indicators to see what prices targets and reversal levels we should be watching.

In this daily bar chart of NOW, above, we can see that prices tested the rising 50-day moving average line in June, early July and earlier this month. All of the dips or tests were successful and prices are moving up and away from the rising moving average line. The slower-to-react 200-day has been pointed up since early November. The volume pattern looks like it became heavier since May as prices turned sideways. Heavier volume and sideways price action can mean that buyers of NOW are meeting an equal force from sellers and the chart isn't making much upside progress.

The On-Balance-Volume (OBV) line shows a rising trend from September to early June, telling us that buyers of NOW were more aggressive. Since early June, the OBV line has been neutral and prices have moved sideways to a touch higher. The Moving Average Convergence Divergence (MACD) oscillator has turned up from the zero line for a fresh outright go-long signal.

In this weekly bar chart of NOW, above, we can see that prices are above the rising 40-week line. The weekly OBV line looks much stronger than the daily one, above. Starting from February of 2016, the OBV line has shown month after month of aggressive buying. The OBV line in the four months looks stronger on this timeframe than the daily chart. The Moving Average Convergence Divergence (MACD) oscillator has been above the zero line since July of 2016 -- and it looks like it is poised for a fresh outright-buy signal. 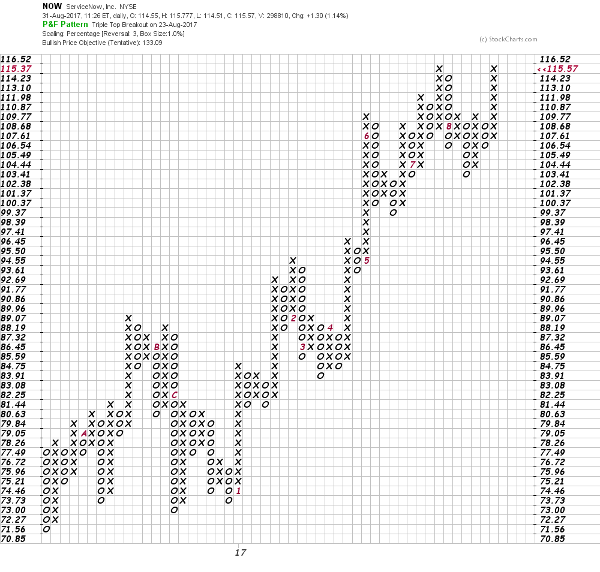 In this Point and Figure chart of NOW, above, we can see two key features. First is that a trade at $116.52 will be a new high for the move up -- and a breakout generating a longer-term price target of $133.09.

Bottom line: It looks like NOW is making its move to new high ground. Approach from the long side risking a close below nearby support around $104 targeting the $130-$135 area.

Get an email alert each time I write an article for Real Money. Click the "+Follow" next to my byline to this article.
TAGS: Investing | U.S. Equity | Technology | Markets | Risk Management | Stocks