Bristol-Myers Squibb Co. (BMY) has seen its share price get "roughed up" a few times in the past year or so. With hindsight a number of the downside price gaps (price voids) that were accompanied by heavy volume turned out to be buying opportunities. Forward-looking investors accumulated shares aggressively back in the early months of 2017.

Prices have tested the $60 level in several instances but this time seems like it will be the real deal and prices will break higher. Let's see how the charts and indicators are shaping up right now and whether we want to participate.

In this daily bar chart of BMY, above, we can see the somewhat erratic trading from September to early March -- upside gaps and downside gaps confused me and made it hard to position a trade in either direction. Since early March prices have moved sideways but with an upward bias starting in June. Prices dipped briefly toward $52 a few times and that was the place to buy. BMY crosses above and below the 50-day moving average line a few times, whipsawing the trend-following crowd. From the middle of June BMY stays above the now rising 50-day and 200-day averages.

The On-Balance-Volume (OBV) line rockets higher from late January to early March, signaling to me that there was a lot of aggressive buying. The OBV line was neutral until late May and then it has been rising to confirm the price strength and tell us that buyers are accumulating more shares of BMY. The trend-following Moving Average Convergence Divergence (MACD) oscillator crossed above the zero line in June and is still in a bullish mode.

In this weekly bar chart of BMY, above, we can see what looks like to me to be a pretty good-looking base pattern that has been evolving the past 12 months. Prices have been above the rising 40-week moving average line and BMY is back up near its 52-week highs. The weekly OBV line has been up and down the past year but the line has quietly firmed the past three months.

The weekly MACD oscillator has just crossed above the zero line for an outright go long signal -- the first time in more than a year. 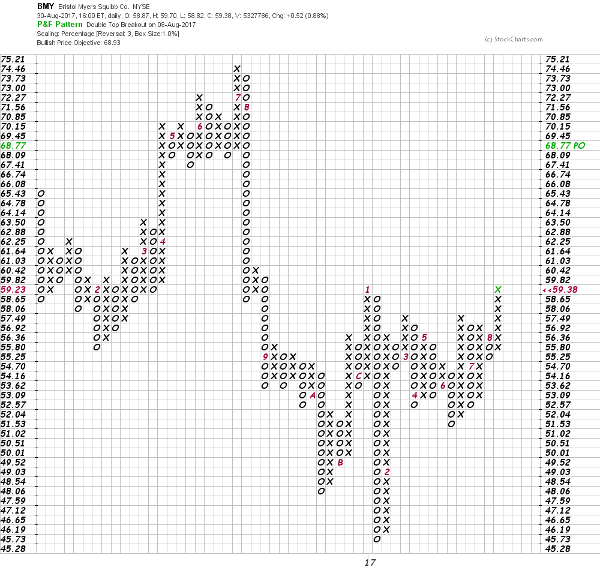 This Point and Figure chart of BMY, above, was plotted by looking at percentage change movements as opposed to fixed-dollar amounts like $1.00. A trade at $59.82 on this chart will be a new high and breakout. The potential breakout would allow for a potential price objective of $68.93 or $69 rounding up.

Bottom line: I like the charts and indicators right now on BMY and I would be a buyer here risking a close below $54. On the upside, I would set my sights on the $69-$72 area.

Get an email alert each time I write an article for Real Money. Click the "+Follow" next to my byline to this article.
TAGS: Investing | U.S. Equity | Healthcare | How-to