I last covered Adobe Systems Inc. (ADBE)  in early July, when it looked like the stock's uptrend was shifting into a neutral or sideways trend. But that didn't last for long, as ADBE hit new highs by the end of the month. Prices stalled a bit from late July into August's first half, but Adobe bulls have come back once again. Is that the definition of resilient? I'm not sure, but I am impressed.

I summed up my strategy last month by writing: "After a strong rally from around $105 in December, the pattern of trading has shifted from up to more sideways. Signs of aggressive selling have not yet become evident, but some of the indicators have weakened. Traders long ADBE from lower levels should raise sell stop protection to a close below $135."

Well, Adobe never ended up breaking the $135 level, so now I'd suggest a $140 stop based on the stock's latest chart:

We can see in the daily chart above how ADBE has bounced off of its rising 50-day moving-average line several times since May. Traders are obviously cognizant of this indicator and acting on it.

The rising 200-day moving average line is also still going up, but is well below the current market action (maybe too far below). The daily On-Balance-Volume (OBV) has also been going up all year, which tells us that ADBE buyers have been more aggressive than sellers, with heavier volume on days when Adobe closes higher. The trend-following Moving Average Convergence Divergence oscillator (MACD) has also been in positive territory since early January and is in a bullish configuration.

We can see how the stock's rising 40-week moving-average line has done a great job in keeping you in the major trend. The weekly OBV line has also been bullish for all of 2017, while the weekly MACD oscillator is poised to cross to the upside for a fresh outright "Buy" signal.

Lastly, let's check out this long-term Point and Figure chart showing how Adobe's stock price has risen from single digits in 2002 to triple digits today: 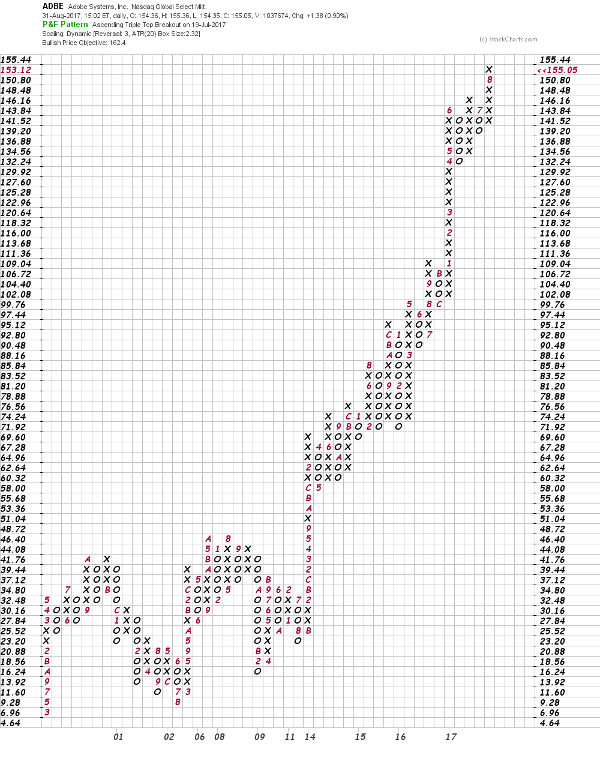 The chart projects $162.40 as ADBE's next upside price objective, up from the stock's current roughly $155 a share. The bottom line? As I wrote in early July, traders who are long ADBE should raise sell/stop protection to a close below $140 and set their sights on the low $160s as Adobe's next milestone to reach.

We're Getting a FLIR-y of Bearish Signals

According to the charts, Flir Systems should only be bought on strength.

Let's Get Up Close on ZoomInfo

Not everyone is suited to trade new issues, but here's a technical strategy to trade ZoomInfo Technologies.

A Trade on Micron Technology as it Tests Support

A small trading position or bull call spread might be warranted, depending on support.

Don't Give Up on Cisco Systems Despite Disappointing Forecast

A review of the network equipment maker's charts suggests its shares still could move higher in the weeks ahead.