Thus far, the crude oil futures market has found a way to avoid liquidation of what has become the largest overcrowded trade in the history of oil speculation. Nevertheless, the relentless oil rally has habitually run out of steam in the high-$60s and low-$70s. In fact, each attempt at a break meaningfully above $70 has failed at slightly lower highs. If this pattern continues, the near-term highs in oil are nearer than most expect. 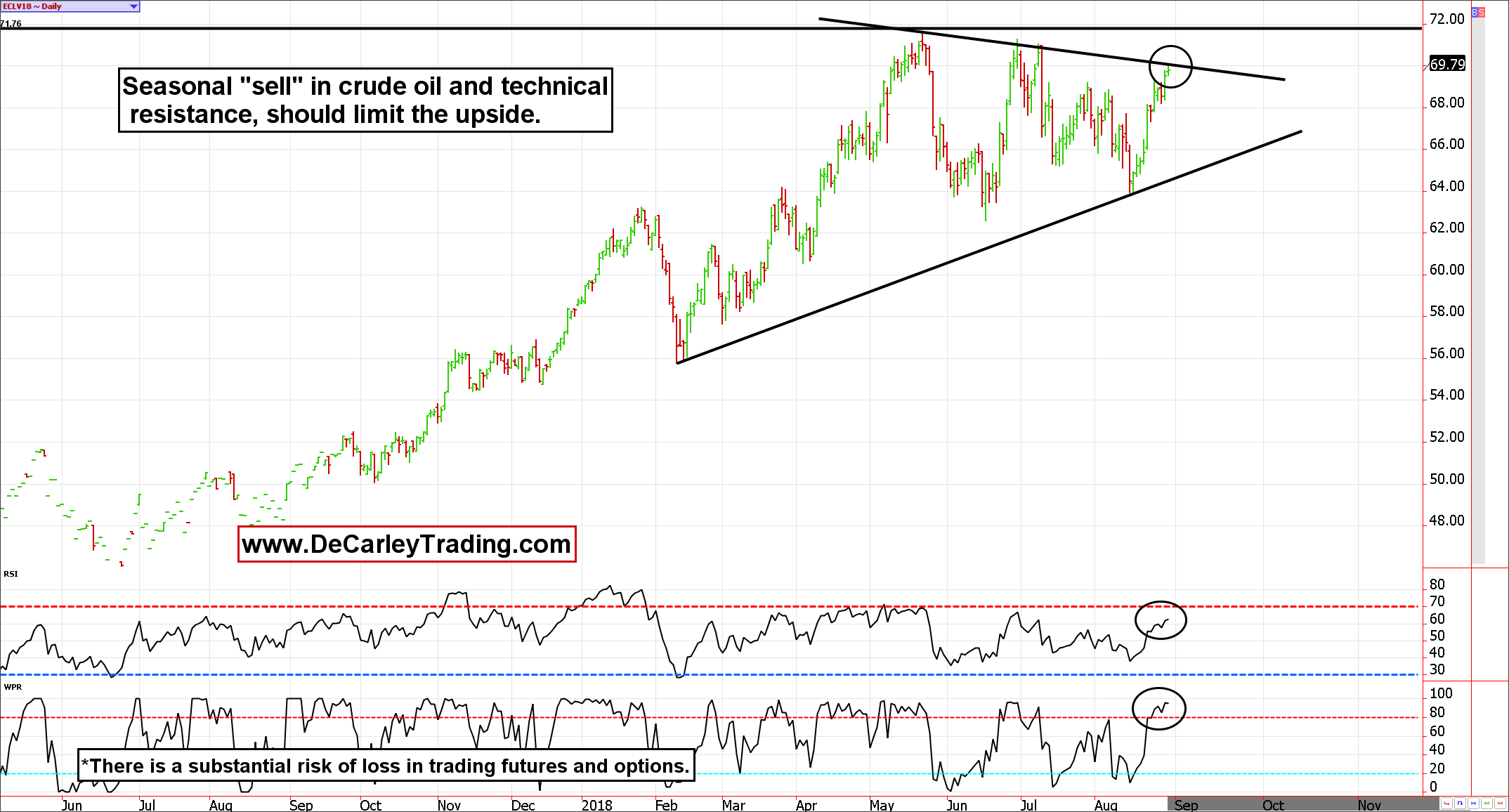 Charting the front-month futures contract, currently the October West Texas Intermediate crude oil traded on the CME Group, we see sharp trendline resistance near $70.00 per barrel. Should this level break, oil could see a run close to $72.00, but further gains would be unlikely. Those looking to play the downside in oil, or those looking for an area to lock in or protect gains made on bullish bets, should consider the $70.00 to $72.00 an attractive place to do so.

Crude oil futures generally struggle in the later part of the year with mid-October through mid-December being the crux of seasonal weakness. Yet, we view any rallies into technical resistance from August through the year-end as being potential opportunities for the bears.

Data mining efforts by our friends at MRCI (Moore Research Center, Inc) have discovered a pattern using the December crude oil futures contract that suggests selling on August 29th and holding through September 23rd has produced a profitable trade on 12 of the previous 15 occasions (an 80% success rate). The average gain on a single futures contract would have been about $2,650 which translates into a break of about $2.65 per barrel. With crude trading near $70, this is merely 3% to 4% but when crude was trading sub-$40 it was a more meaningful state. Nevertheless, the chart and seasonal analysis suggest that this is not the time to be complacently long crude oil. Further, we suspect a retest of the mid-$60s is in the cards, even if the bull market resumes. After all, this has been the pattern throughout much of 2018; there is no reason to expect otherwise until the market proves it wants to breakout in one direction or the other.

*THERE IS A SUBSTANTIAL RISK OF FINANCIAL LOSS IN TRADING FUTURES AND OPTIONS.

(This commentary originally appeared on Real Money Pro at 1:00 p.m. ET on Aug. 30. Click here to learn about this dynamic market information service for active traders and to receive Doug Kass's Daily Diary and columns from Paul Price and others.)