Anyone who has ever needed to take a shower while keeping to a schedule knows the feeling. The cold water seems almost unbearable, that is until the water starts to warm up. Then the mini-experience of relief followed by "let's get this done", which in turn is followed by "Holy Moly, this water is too hot." That all happens within a minute or two, but seems like it lasts forever.

Have you been thinking about Chinese equities. Every trader knows that in order to come close to maximizing performance, the timing of entry is when the shower water is still uncomfortable, yet every trader also knows, at least in theory.... that fighting the trend is usually not a very good idea. One must ask oneself, just how priced in is a prolonged trade war between the U.S. and China? Obviously, with the Shanghai Composite down more than 17% for the year, after being up nearly 8% in late January, Chinese equities have suffered as conditions of cross border trade have deteriorated. By the way, the comment period for the next tranche of U.S. tariffs on Chinese imports, worth $200B, will terminate next Wednesday.

The Sun Will Come Out...Tomorrow

Tomorrow, MSCI will double the weighting of Chinese exchange domiciled shares from 0.4% to 0.8% of the MSCI Emerging Markets Index. The firm estimates that this change will bring with it roughly $22B worth of inflows from funds with mandates forcing them to track the index. For those keeping score, according to the Wall Street Journal, international investors have already purchased $32.2B worth of shares listed at the Shanghai and Shenzhen exchanges in 2018, which is more than in all of 2017. From the same article, it is pointed out that UBS Global Wealth Management is of the opinion that the full inclusion of Chinese representation in global indices will take half of one decade, and could force an additional $350B into those stocks.

I don't know if the timing is right just yet. I do know that I have been thinking about selectively adding small, incremental positions to some of my portfolios in Chinese names that trade on American exchanges. That way, if something stupid happens, though I suffer losses, I'll still at least be exposed to American style liquidity, and I'll completely understand the process of price discovery. By the way, Alibaba (BABA) is up 3.5% on the year... under-performing the S&P 500 (+9%), but at least in the green. The only Chinese name that I have hung onto for more than a short-term trade throughout this "trade war" has been iQIYI  (IQ) . That name has done well of late, and even though its up 95% since it's U.S. launch, it's also is more than 34% off of it's highs.

A lot of you, I know do not have the time, nor the energy, to sift through the marketplace trying to identify Chinese names that might be lifting their heads from year to date lows. There are a few names that everyone knows, and then it gets tough. The individual non-professional looking to consider a little exposure might want to take a look at the iShares China Large Cap ETF (FXI) . This fund realized a roughly $415M in inflows last week, which is the most for this fund since mid-2015. The largest holding for this fund that would be recognizable to the average American retail investor would be the recently punished Tencent Holdings. That firm's American Depository Shares go by the ticker... (TCEHY) , by the way. Just an idea.

Go ahead. Pull up a year to date chart of Amazon (AMZN) . Wow! Maybe you're already in the name. Maybe not. If not, you may not have realized just how wonderful that stock's chart really is. Almost defies technical analysis. By the way, my target price for Amazon remains $2100. I am long these shares. Only with this name might a stock watcher such as myself actually start to think that the stock is nearing target while still more than 100 bucks away. I am sure that you noticed what Morgan Stanley analyst Brian Nowak did to the name yesterday. While reiterating his overweight rating, Nowak raised his target price from $1850 to $2500. Did I already say "Wow?" Makes my target look kind of pedestrian in comparison. The industry average target for those concerned is $2142. Is Amazon the best business ever? I mean, at least since the first blacksmith figured out a way to shoe horses? With key drivers such as Amazon Web Services, Amazon Prime,and the simply blossoming advertising business on top of the dominant position that the firm holds in simple e-commerce, it would be hard to argue against.

The Other FANGS (Not Named Diamondback)

Ever hear of Diana Ross and the Supremes? Can you name any of the Supremes? Maybe not unless you grew up listening to them. The widening gap between the top and bottom of the FANG names is not quite that extreme, but in my opinion Amazon is the clear champ, while Alphabet (GOOGL) is also a darned good stock. Therefore I am long both. The other two?

Netflix (NFLX) , while certainly a fantastic business, and recently on the rise, showed some reason for concern. In July the firm reported that subscriber growth had disappointed, margins had slipped, and the firm just fell short on estimates for Q2 revenue. I still watch Netflix myself all the time. I love it, but I am not invested in it at this time. As Wellington's and von Blucher's troops laid in wait for  Napoleon's Old Guard at Waterloo, so Amazon, Walt Disney (DIS) , and Walmart (WMT) among others prepare to take on Netflix, perhaps grabbing some market-share, almost certainly depressing margins.

Facebook (FB) ? Well, the stock has run sideways for more than a month now despite what looks to the average person to be something close to a monopoly. Concerns over user privacy, a Q2 miss as far as revenue estimates are concerned, and now apparent division within the rank and file are enough to keep my investment dollars elsewhere. Back to Alphabet.

I do like Alphabet. The same Brian Nowak of the same Morgan Stanley also increased his price target for GOOGL to $1515 from $1325. Nowak points out the unrealized value in Alphabet's Waymo ride-hailing business likely to launch later this year. Nowak feels that this one business could ultimately run with a potential valuation of $175B on top of the already established business lines such as search and advertising. This is easily my second favorite FANG name and if there would be any short-term depression in the market price due to the president's ire, I would think that the name might respond the way that Amazon did when it was that firm's turn in the barrel. I see this, and I likely add to my long.

Almost Under The Radar Tech

Despite the obvious, and despite the recent Morgan Stanley downgrade across the semi-conductor industry on inventory concerns, KLAC continues to trade near summer highs. Micron... not so much, however at four times forward looking earnings, I would say that the name is either grossly undervalued, or about to do a "Thelma and Louise". I am going to take yesterday's announcement that the firm will invest $3B in memory chip production at it's Virginia plant as a decisive positive. The firm expects the market for memory and storage to more than double by 2021. Huzzah.

You wonderful people ever hear of Open Text Corp. (OTEX) ? This is a Canada-based concern that develops management software that captures, and stores organizational content. The name is not expensive, trading at a last sale of $39.33. That's good enough for 13 times forward looking earnings. Margins are growing. Cash flow is there. Debt is huge, but cash on hand is growing, and the ability to manage that debt is in check. The firm's Current Ratio has moved from a somewhat uncomfortable 0.89 to a much cozier 1.33 over the past 12 months. You can strip out inventories. The Quick Ratio is still a solid 1.23. This firm can pay their bills. 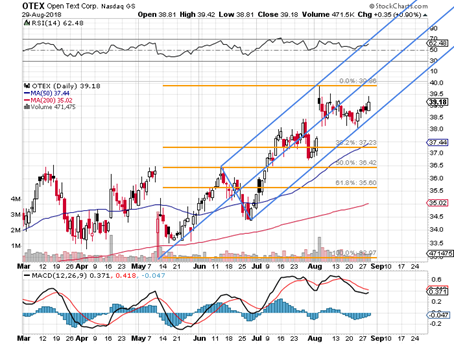 This stock certainly has trend behind it. The daily MACD appears close to a bullish cross-over. Relative Strength is a positive. The Pitchfork model seems to be working as a guide for several months now. I would think that in the event of a pullback that traditional Fibonacci support crowds enough so that the name would find considerable difficulty in slipping beyond the mid-$30's. I am flat this name, and I will wait until this article is public for several hours before considering the taking of any action, but let's say that the firm has my attention.

Note: The options market for this name does not appear to be extremely liquid. The November $35 puts went out at $0.30 last night. I don't know how worth it that is. There certainly was not much volume. This may strictly be an equity play.