Recent weeks brought news of a buyout agreement for Zoe's Kitchen Inc. (ZOES) at a price of $12.75 per share in cash. That was a nice premium to its previous day's close but was no cause for celebration for longtime shareholders.

Despite losing money in the year it went public, Zoe's launched its initial public offering (IPO) at $15 on April 10, 2014, then gapped higher on the first public trade. The stock traded mostly between $30 and $40 for the next two-and-a-half years. 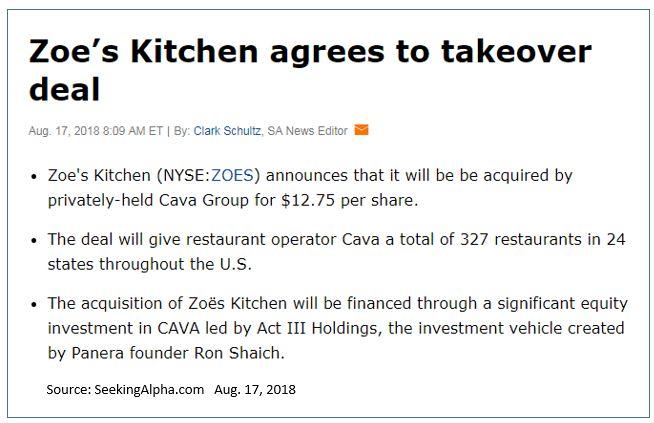 Management's acceptance of an offer south of $13 is an admission that the firm had little hope of sustainable profits in the foreseeable future.

The buyer, Ron Shaich, pocketed a fortune selling his Panera Bread business and may be better suited to turning things around. He already owns a similar Mediterranean restaurant chain called CAVA and simply may be purchasing Zoe's to convert most or all of its locations to his own brand.

Almost all previous buyers of ZOES will be cashed out well below their buy levels without ever earning a penny in dividends. 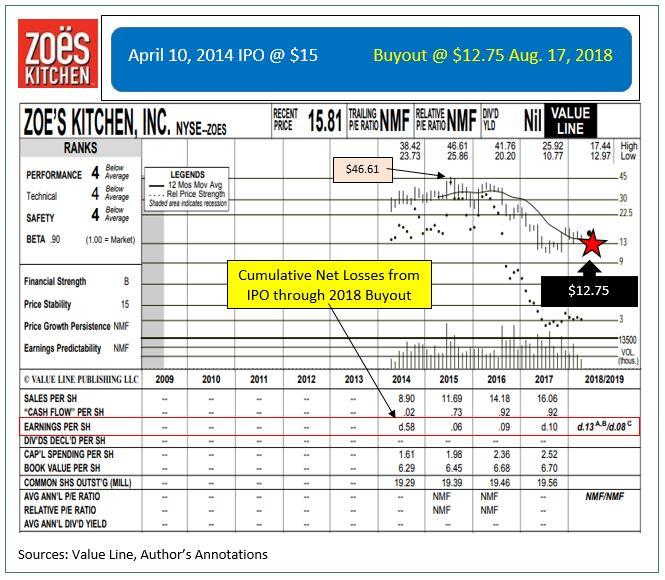 Fitness gadget tracker maker Fitbit Inc. (FIT) was another hot issue when it debuted at $20 per share back in June 2015. Fitbit ran quickly to almost $52 before the fad started to fade.

Profits turned to losses and have not recovered since. The stock bottomed earlier this year at $4.51 before rebounding slightly. It currently sits around $6 a share. With no profits since 2015, who knows if this stock will ever make a meaningful bounce. 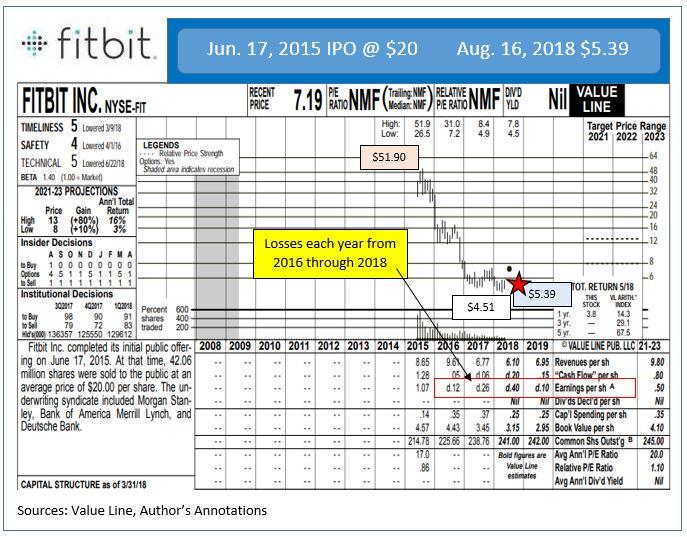 GoPro Inc. (GPRO) couldn't have been more in demand when it came public at $24 per share on June 24, 2014. Like Fitbit, GoPro was making money at the time it came public and its future looked bright.

Crazy traders pushed the stock to $98.50, almost 100 times earnings, before sanity reasserted itself. Earnings per share plunged to just 25 cents in 2015 and the shares dropped to below $16. GPRO has shown losses the last two years, and it appears likely to extend the run of deficits in 2018 and 2019.

GPRO hit $4.42 on the downside this year before bouncing back to above $6.

Having patience with stocks such as ZOES, FIT and GPRO just meant bigger losses for most of their long-suffering shareholders. 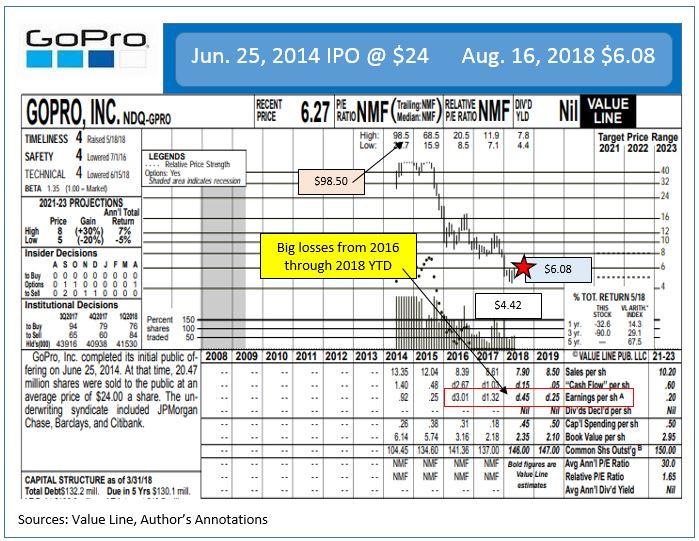 Even business success stories such as Shake Shack Inc. (SHAK) are no guarantee of success for early investors who missed getting shares at the IPO price.

Shake Shack has done well as a company. EPS grew nicely each year since it came public. Nevertheless, the stock slumped from almost $97 to $30 by January 2016. Stellar growth rescued long-term holders as SHAK rebounded. The stock recently has been trading around $58 a share, still down about 40% from that insane 2015 peak. 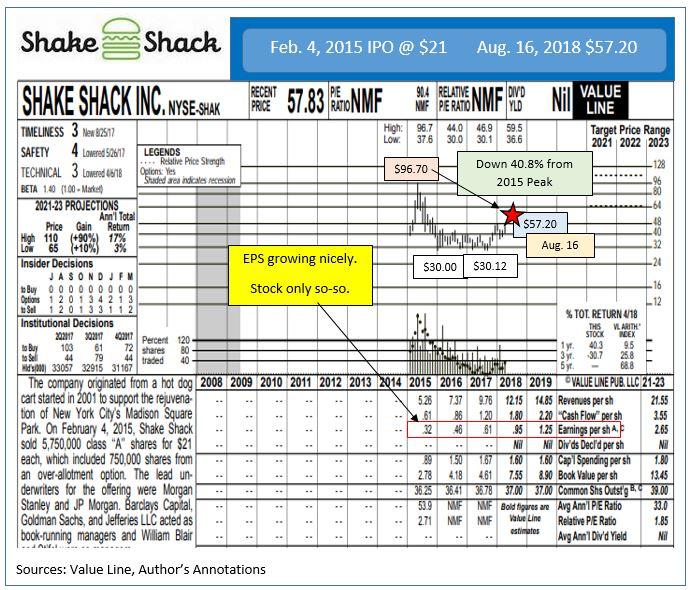 The recent quote represents about 95x this year's estimate. SHAK poses a ton of risk due to that extravagant valuation. Even wonderful results may not generate good returns for stockholders over the coming year or two.

Chasing hot new issues should only be attempted if you are lucky (or connected?) enough to be able to buy at the IPO price. Even then, it usually pays to take a quick profit if you get a nice pop right after trading begins.

The examples shown are pretty typical of the genre. Many flare right after the IPO but crash and burn before too long. Some never give early investors a good exit point. Drops of 50% to 90% are not uncommon from the post-IPO euphoria levels.

Why play a game with so little chance to win?

(This commentary originally appeared on Real Money Pro on Aug. 24. Click here to learn about this dynamic market information service for active traders and to receive daily columns like this from Paul Price, Bret Jensen and others.)