(This commentary originally appeared on Tuesday on Real Money Pro. Click here to learn about this dynamic market information service for active traders.)

Everyone is hoping for the best for everyone affected by Hurricane Harvey. It's unfortunate that the huge storm system is spending so much time in one area, instead of breaking up and moving on.

It's natural for investors and traders to wonder which companies stand to benefit from the rebuilding of the areas affected by Hurricane Harvey. However, before you assume that a company will gain from this or any other situation, it makes sense to first check the chart.

For example, over the weekend, a friend suggested that Masco (MAS) might be worth a look. Masco owns a variety of home improvement brands, so initially this seemed like a reasonable suggestion.

However, Masco's chart indicates that the stock is about to move lower. A descending triangle pattern has formed, projecting the stock to the $33 area. At the very least, the stock should fall to $35, to fill a gap that was created in April. Masco's MACD (moving average convergence divergence) indicator has been trending lower since June (red line), foreshadowing a break to the downside. 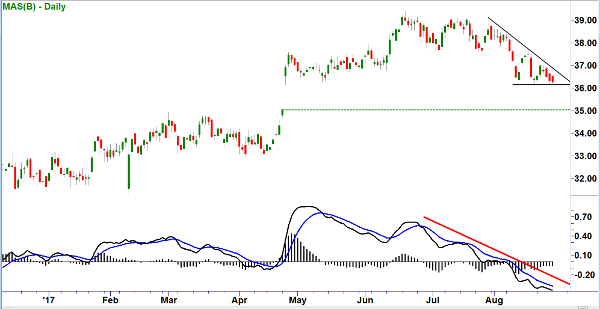 Countless automobiles are being damaged by flooding, so it's reasonable to assume that automakers will stand to gain from Hurricane Harvey. It comes as no surprise that at yesterday's open, Ford (F) gapped above the previous day's high.

However, that buying was met with a wave of selling pressure. Sentiment deteriorated as the day wore on, and Ford eventually moved below the previous session's low. Those who bid the stock higher at the open were quickly handed a loss. Despite recent gains, the stock's long-term trend appears to be lower.

Here's what the chart is telling us: Ford may gain some sales due to the hurricane, but it is a one-time event. Meanwhile, there are other developments occurring in the industry that could have a longer lasting negative impact. For example, the rise of ride-sharing companies like Uber and Lyft have the potential to permanently change the landscape of the automotive industry. 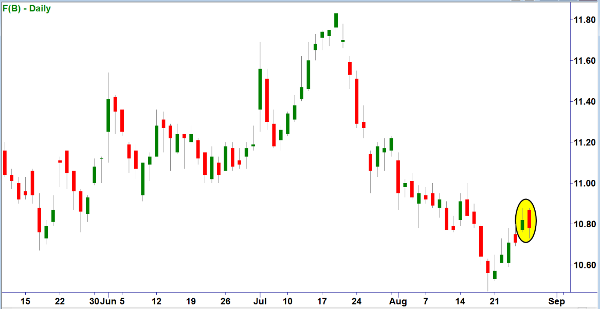 Another suggestion was PPG Industries (PPG) . Surely, one of the world's largest suppliers of paint, fiberglass, and other coatings would stand to benefit from the storm.

While that line of reasoning makes sense, the chart indicates that the stock is headed lower. PPG's weekly chart has formed a bear flag (circled). The pattern projects the stock to about $98.

Of the three names, only PPG finished higher yesterday, climbing a mere 0.41%. The so-called smart money had its chance to pile in yesterday, and passed on all three names. That alone should tell us everything we need to know. 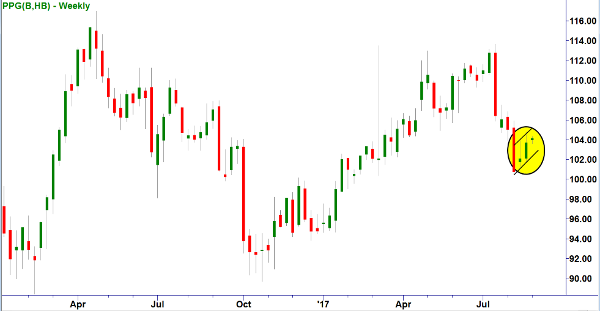 Chatham Lodging Trust, Summit Materials and Vistra Corp. all have seen their CEOs add to their holdings in these companies.

Camping World's Charts Are a Breath of Fresh Air

Is this stock in the 'sweet spot'?