This market is putting many traders to sleep. When asking other traders recently what they're slinging in their brokerage accounts, plenty have replied: "Why bother?" The ranges are tight and many charts look like carbon copies of each other -- as I found out with the six stocks below.

I thought several times as I was going through different charts last night that I had accidentally entered a same ticker symbol twice. After all, what I was seeing for one stock wasn't much different than what I'd just seen for the stock before.

So, I did a few groupings of stocks and this concept became even clearer. When I placed three different stock charts next to each other, the price pattern since June turned out to be nearly identical: 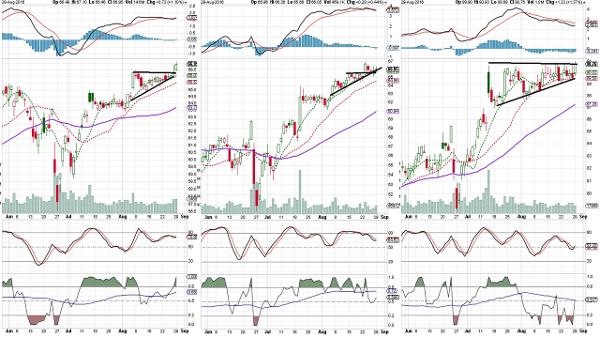 All three of these stocks dropped sharp in late June, followed by a rally, a consolidation and then a breakout. We're now set up for an additional breakout on all three, with the stock on the far left already in breakout mode.

Secondary indicators in terms of momentum and trend are also very similar. The three stocks' Moving Average Convergence Divergences (shown on top of the price lines in the three charts above) are all positive but consolidating, which is consistent with the price action. The full stochastics (shown directly below the price charts) are also bullish, but have retraced from overbought territory and now appear ready to turn higher.

In fact, the only difference between these three stock charts is in volume, as shown by the Chaikan Oscillator at the bottom. However, much of that has to do with the stocks themselves.

Are you wondering what stocks these charts show?

I would venture that it'd be difficult to guess, because they have virtually nothing in common. They're JPMorgan Chase (JPM) , Tupperware (TUP) and Yum Brands (YUM)  -- which I'd say is a pretty random trio.

But it doesn't stop there. Here's a second group of three charts that shows similar results: 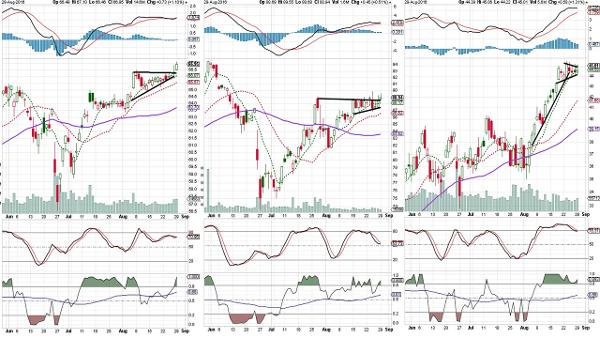 Can you guess which stocks these charts show? Well, the one of the left is JPM again, although you could have easily mistaken it for YUM or TUP.

The chart in the center has a very similar price pattern, as well as a nearly identical Chaikan Oscillator and MACD plus just slightly more elongated full stochastics. Is it related to JPM? Hardly -- it's NXP Seminconductor (NXPI) .

Lastly, the third chart at right gives us a bullish chart with a bit of a different look. This stock's June/July timeframe played out differently. Price is in a pennant with this stock, with a very strong MACD, full stochastics in overbought territory and a more consistent Chaikan Oscillator. The stock: Devon Energy (DVN) .

The Bottom Line
Similarities like the ones above are creating challenges for traders and investors who want to diversify. If I asked such players how diversified they'd feel owning JPM, TUP, YUM and NXPI, they'd probably answer: "Very diverse" -- but they'd be wrong.

Ironically, Abercrombie & Fitch (ANF) almost made this group as well. I had ANF as No. 6 on the list, followed by Microsoft (MSFT) and F5 Networks (FFIV) as possible alternatives.

ANF is getting hammered today, and while that might support the diversity aspect of the group, the differences currently end with fundamentals. Technical diversity is lacking. Many charts are interchangeable even though the companies are totally unrelated.

That gets troublesome, as it creates a strong short-term correlation. As ANF demonstrates, this correlation will vanish when company-specific news hits the wires. But it also signals the need for a closer look at fundamentals right now -- and a little less reliance on charts unless a pattern is less common across multiple names.

Get an email alert each time I write an article for Real Money. Click the "+Follow" next to my byline to this article.
TAGS: Investing | U.S. Equity | Financial Services | Energy | Technology | Consumer | Markets | Stocks