I have not reviewed the charts and indicators of Kellogg Co. (K) all year, but way back in December I wrote that, "I think K made a tradable low in late October and traders should consider the long side at current levels risking to $62 or on a close above $68 risking a close below $64."

Prices stayed aloft into March and then declined to a new low near $56 in early May. K has since rallied back to move above the March highs. Let's look at some updated charts to see if K can continue higher from here.

In this daily bar chart of K, below, we can see that prices are above the rising 50-day moving average line as well as the now bullish 200-day average line.

The daily On-Balance-Volume (OBV) line turned up in early May and its rise tells me that buyers of K have been more aggressive than the sellers.

The Moving Average Convergence Divergence (MACD) oscillator has been on the defensive since early July but it is close to a bullish crossover and new buy signal.

In this weekly bar chart of K, below, we can see that a longer-term downtrend has been broken and prices are above the now rising 40-week moving average line.

The weekly OBV line has not yet moved to a new 2018 high but is has firmed the past three months.

The weekly MACD oscillator is still in a bullish mode above the zero line but it has narrowed a bit recently.

In this Point and Figure chart of K, below, we can see a positive looking picture. A rally to $75 will be a small double top breakout and open the way to further gains with a potential price target of $88. 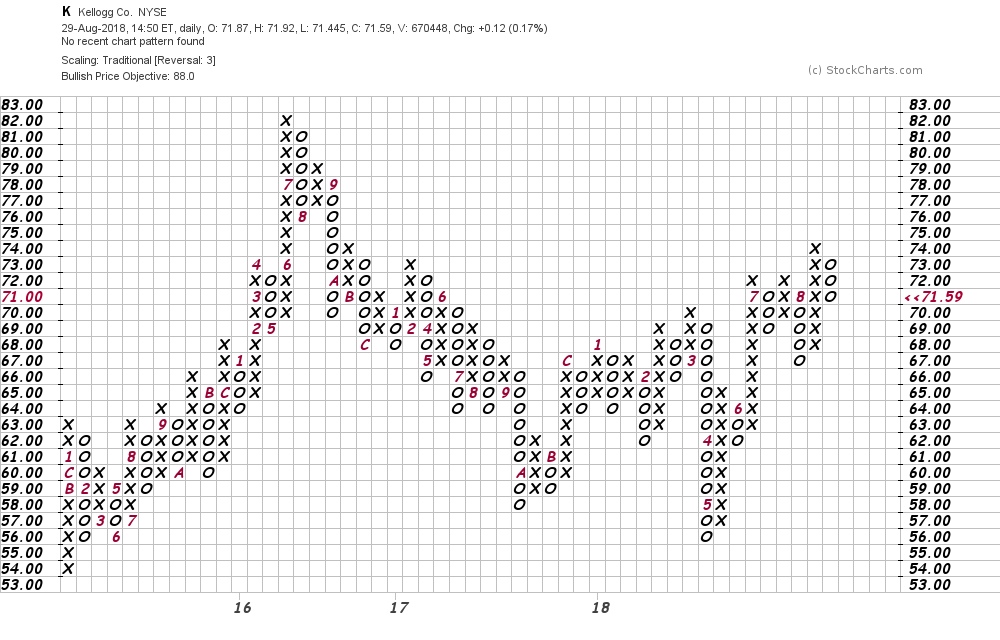 Bottom line strategy: Traders could go long K around current levels with investors risking to $66. Add to longs above $75 and look for gains to around $88.

Get an email alert each time I write an article for Real Money. Click the "+Follow" next to my byline to this article.
TAGS: Investing | Stocks | Food & Drink