Have you ever wondered if you had maximized your own potential? Or even if you had come close? I think we all have these doubts from time to time. My thought is that it is quite normal to inspect and identify one's strengths and weaknesses, and then take that cold, hard look at past performance. There is no shame at all in not hitting one's perceived level of ability. True failure is really only ever experienced by those who stop searching for something more. We all have talents, and hence a lack of talent in certain areas. The one item that remains for all time completely within our control is our level of effort, or work ethic. You will lose battles. You will make mistakes. Never, never admit that you can be outworked.

How about these financial markets? Are equity markets specifically, and perhaps the entire economy more broadly, valued at or near capacity? There are conversations being had right now with very bright people landing on both sides of that coin. Yesterday, all four major equity indices closed -- although up very small -- either at or near record levels. Only the Dow Industrials (the narrowest of the four) still has some work to do there.

The question really becomes, with these broad market indices trading at somewhere between 16.5x and 17.5x next year's projected earnings, can underlying conditions improve? Or must we rely upon a simply expansion in these valuations to make future gains? My belief has always been that market prices for equities are reflective of forward-looking earnings. I think we are mostly in agreement there.

Markets are coming off of second-quarter earnings that printed at nearly 25% year-over-year growth on revenue of roughly 9.5% growth. The next two quarters are projected to still print at 20% plus for EPS, and 7.5% plus for revenue. So peak earnings?

Doubters point out that unemployment levels will have a hard time showing improvement from here. Corporate margins are in great shape, broadly speaking. They importantly point out that the benefits of large increases to corporate repurchase programs and dividends have already been experienced. Macroeconomic conditions support the notion that this is the best economy we have seen in a very long time.

These points are all true. Let me counter, to some degree, at least some of these points. Consumer sentiment is literally off the charts. Savings rates are improved, discretionary income is higher. That is thanks to low unemployment, but also thanks in significant part to last year's tax cuts.

Remember wage growth has failed to outrun what tepid consumer level inflation that we, as a nation, have seen. What the tax bill has done (unless you live in a high-tax state like NY) has managed down the overhead associated with running a household. For this condition to improve from here, we'll need to see overt wage growth in comparison to the costs of running that household.

Other less "micro" factors where improvement might be felt for all would be a positive resolution to the various trade disputes that the current administration has with most U.S. trade partners. The ball does appear to be rolling in the right direction, and markets have partially priced this in, meaning that negative headlines in this arena will have a more-significant impact than they would have had a few weeks back.

This leaves policy -- both monetary and fiscal, and the resultant dollar strength. Certainly, there is room for increased potential here. Fiscal policy is already pretty loose. I don't think we want to get any looser there. Simply by focusing the increased Treasury issuance on the long end of the curve, I think Steve Mnuchin is on the right track. Could have acted sooner, but he did "get it."

Where the Wild Things Are

You have seen the Italian 10-year, right. That duration Italian sovereign is currently giving up more than 3.15%, while Italy's neighbors, even historically troubled economies like Spain, all yield less than 1.5% for a similar product. Now, I don't know any more than the next guy, buy what if sometime next year, the ECB is forced into a position to rescue Italian banks, as well as the planet's third-largest bond market?

The talk in Brussels will quickly turn from a tightening schedule back into an asset purchasing agenda... "quantitative easing." Now, if the FOMC gets too far ahead of its peer and then that peer reverses course, just what do you think happens to the U.S. dollar?

This is why I feel that it becomes important for the Fed to slow the pace on hiking the Fed Funds Rate, or in managing the balance sheet. Take a pass in December after hiking on September 26, or maintain a $40 billion pace in October for the "quantitative tightening" program, rather than going up to $50 billion. You spent almost a decade resisting common sense reasons to raise rates prior to the late 2015 change in trajectory. Surely some caution without changing intent at all might be warranted.

By the way, if Treasury would focus the already mentioned issuance on the long end of the curve, while the FOMC relieved upward pressure on the short end, this would improve net interest margins for the financials. What that also does is increase the availability of credit, which is the lifeblood in the end for what is known as the velocity of money. That velocity will be where our potential for break-away speed would originate should the fiscal boost afforded this economy start to flicker. You may have noticed that the financials as a sector are only projected to show rough revenue growth of 3.2% y/y in the third quarter, well below broad market expectations.

May the Salesforce Be With You

The stock was unfairly punished as trade-related headlines made waves. Twenty days later, on July 31, with the last sale at that point down to $138.03, I again increased my target price from $152 to $160.

I think that Salesforce is an easy name to like. Seems highly valued? Sure, 56x forward P/E is expensive. The whole cloud is expensive, because that is where the growth is in 2018. Margins are rising, cash flows are solid. Debt is manageable. How much of the valuation was priced into having a well known, well liked, obviously competent CEO like Marc Benioff at the helm?

Well, we have not lost Benioff. He is still the visionary and the marketing guy. Nearly a month ago, the firm promoted COO Keith Block to the position of co-CEO. Block is going to run operations and execution. Can this work? I think it already might be. I also think that this is an example that maybe a firm such as Tesla (TSLA) should probably follow -- for very different reasons.

Back in May, the firm closed on the Mulesoft acquisition. That acquisition is now expected to provide the lion's share of revenue growth for the entire year. What the Mulesoft deal does is provide Salesforce with a high-end technology that facilitates data transfer from a client's on-premise sight to the "cloud."

Over the past two weeks, Action Alerts Plus holding Salesforce has seen upgrades and increased target prices from the likes of Cowen, Morgan Stanley, Credit Suisse, Piper Jaffray, and Barclay's. Those target prices now range from $165 to $178. CRM closed last night at $152.99 after trading as high as $154.88 on Monday morning. Those of us long this name have something significant to protect going into tonight's numbers. Let's take a look. 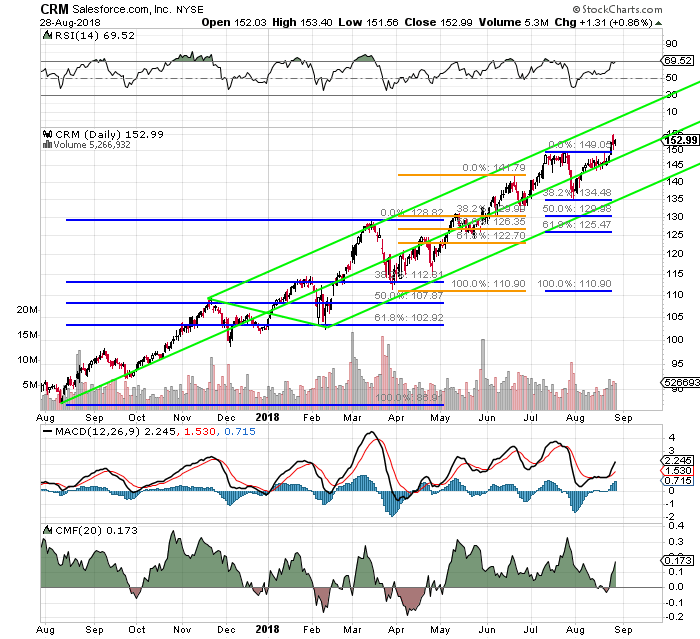 Everything looks stellar, which almost scares me. Relative Strength, Money Flow, the daily MACD. Hot, hot, hot. The name most obviously finds support on selloffs at traditional Fibonacci levels, and just as obviously colors within the lines regarding a year-long Andrews' Pitchfork model that has used the central trend line consistently as a pivot, but more recently as support.

There's one other important item to see here -- and that's timing. Salesforce holds its big dog and pony show, the annual Dreamforce Convention in San Francisco, in late September, from the 24th through the 28th. My thought is to expect positivity around this name at that time, regardless of what happens tonight.

I don't like to violate basis, but when a long position runs for a year or more, you end up with a rule that will not allow you to add at any price if you stick to it. If the name takes off tonight, I likely leave my equity position unchanged. On a pullback of any kind, the $144 level looks like a spot to me to maybe add a partial buy. Or maybe.... short a put option.

--Sell (write) one 144 Sept 28 put option (last: $2.58). Note that there was no volume for this product yesterday, and the bid went out at $1.94, so the valuation is volatile and any participation will impact price discovery.

--Buy 100 shares at $144 or better on a weak reaction to earnings (which is possible, given the recent run). If hit on such a bid, my immediate reaction would, in my opinion, be to sell (write) a Sept 28 call option with a strike price of a roughly $8 premium to the equity purchase price. This should, in theory, pay the investor $2 to $2.50. If that premium is not there in the morning, the trade then becomes less worth it, and I figure something else out.