American International Group (AIG) has sold off sharply this month. Prices are approaching their April lows in the $60-$59 area, and the $64,000 question is whether this tentative support zone holds or breaks.

In this daily bar chart of AIG, below, we can see two distinct highs. The first high in the $67 area is back in December/January and February. Prices declined from February into the middle of April and then prices took the next three months to retest the $67 area.

The movement of the On-Balance-Volume (OBV) line has been interesting. The OBV line rose with the price action from September but it peaked in March after prices peaked. This tells us that buyers of AIG remained aggressive through the first price high.

The OBV line declined to an April low, but its subsequent improvement has been less than robust. This month the OBV line has made new lows for its recent move down and suggests that sellers of AIG have turned more aggressive. Heavier trading volume on days when AIG closes lower is a sign that traders want out now.

In the lower panel is the Moving Average Convergence Divergence (MACD) oscillator, which is in a bearish mode below the zero line.

In this weekly chart of AIG, below, we can see prices have closed below the declining 40-week moving average line. The weekly OBV line has been neutral since January, but the weakness in the past month has brought the OBV line close to a new low. The weekly MACD oscillator crossed to a fresh take-profits sell signal and is close to moving below the zero line for an outright sell signal.

In this Point and Figure chart of AIG, below, we can see a long column of "O's" with some support visible in the $59.82-$58.65 area. The chart gives a tentative downside price objective of $54, but that will require that the April price low is broken. 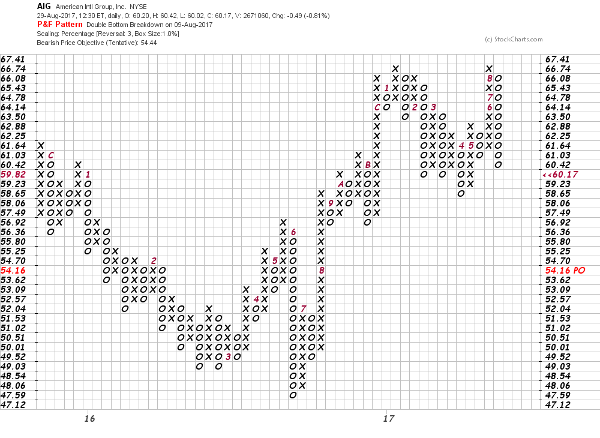 Bottom line/strategy: In the short run, AIG is extended on the downside and an oversold rally or bounce could develop at any time. If no bounce is seen or if it is short-lived, it tells us prices are really weak and the April low could be broken. I have never been good at timing/playing oversold rallies, so I plan to sit this one out.