It has been a volatile year and a half. On Monday, a trade deal was finally struck between the U.S. and Mexico, as the sands of time slowly run out on the Enrique Pena Nieto presidency. Nieto was not constitutionally eligible to run for re-election. President-Elect Andres Manuel Lopez Obrador will be inaugurated this December 1. Both Mexican presidents apparently had a hand in putting this agreement together.

Among the most obvious changes would be those made in the production of automobiles. The first would be that steel and aluminum must be sourced in North America. The second would be the push for higher wages, as between 40% to 45% of auto content would have to be produced by workers that earn at least $16 per hour. These two items are extremely pro-labor from a U.S. point of view, as this would require either higher wages for Mexican workers or would shift more production north of the border. President Trump has long targeted increased operational capacity for U.S. steel producers. Another plus for organized labor.

Agricultural goods will get a pass on tariffs in this deal, as they had in the older version of NAFTA. It was a good day for U.S. farmers, as separately, the Trump administration pledged $4.7 billion to help soften the impact from losses experienced due to the nation's current trade policies.

From a technology perspective, intellectual property copyright holders will maintain full protection. This item will be key as the U.S. administration looks to build upon this agreement and resume talks at some point with China. September 5 is next week. In addition, trade executed through digital distribution will be exempt from cross-border tariffs, as this means of commerce was still futuristic when the original version of NAFTA was drafted.

Perhaps the biggest sticking point from the American side has been the insistence of a sunset clause -- or in other words, a way out if labor conditions or currency valuations end up hurting one nation significantly more than the other with the passage of time. The U.S. had been angling for a five-year window, and that demand had been met with stiff resistance over the past year. The deal agreed to yesterday is a 16-year agreement, with a built-in provision for a six-year review that seems to have been enough to satisfy both Presidents Trump and Nieto.

The question now becomes, where does this leave Canada? What is clear is that both the U.S. and Mexico would like to add Canada to this agreement in order to make this Half-TA deal a true NAFTA deal. It would appear that unless Canada is able to agree to conditions now agreed upon between the U.S. and Mexico, the Canadian position just became that much more difficult.

Like most of kids my generation, I played a lot of sports growing up -- and kept doing so right through my mid-20s. Then it became difficult to find time for oneself, with responsibilities such as raising children and the support required by that family. Hence, like for many of us, that was the end of participation in any team sports that come with any kind of set schedule. About the only thing a young dad or mom can do, sometimes, is run. Not on a time hack. Starting and ending at one's home. The only enemy would be fatigue. All working folks who run, run with fatigue.

So, I ran. Many decades later, I still do. Just slower. The equity marketplace has a runner these days, too. A championship caliber runner. Yesterday, Cemex (CX)   and iQiyi (IQ) ran with this big dog for a day. Since mid-August, Nvidia (NVDA) has spiked side by side with this elite runner. But this runner has been going hard since early April, only pausing to consolidate gains over June and July.

This new champion seems like a beast. The new champ is Advanced Micro Devices (AMD) , and is led by industry superstar CEO Lisa Su. I can't complain. No, I don't have an equity stake. I have been short put options throughout, though. In fact, I am short put options right now. That provides revenue, but not what the equity provides for shareholders when a name goes semi-parabolic like this. Let's take a look.

Over the weekend, AMD introduced the firm's high-end Radeon Pro V340 graphics card at the VMware (VMW) conference in Las Vegas. That, at least, is the most recent news. AMD popped on Monday, closing at $25.26, an increase of 5.3% after trading as high as $27.30 mid-session. Monday's closing bell closed the book on the stock's seventh consecutive day of gains. It's not just this news however. This name is 57% higher since putting better than expected second-quarter data to the tape on July 25.

For the year, AMD is up... wait for it ... 146%. And that is after being down for the year when that early-April turn was made. All the while, Lisa Su was slowly setting the firm up to take market share away from Nvidia in graphics, and another of my names, Intel (INTC) when it comes to CPUs for personal computers and processors.

Could Have Had a V8

Simply put, as a long-term Intel guy, I want Intel to hire Lisa Su. Short of that happening, I want in. As you all know by now, I don't chase. Let's look at short interest. As of two weeks ago, more than 20% of the firm's entire float was still held in short positions, totaling more than 146 million shares. Guaranteed that number is down from there, as yesterday's top sure looked like a squeeze to this old dog. By the way, according to MarketWatch, AMD is the third least profitable (or worst performing) aggregate short position of 2018 in terms of dollars lost, only behind FANG names Amazon (AMZN) , and Netflix (NFLX) at this point.

Let's go back to those Q2 numbers reported on July 25. That quarter, in addition to beating expectations for both the top and bottom lines, showed significant year-over-year improvement almost everywhere. Net sales, EBITDA, cash on hand, profit margins, return on assets, interest coverage.. all up big. Know what was down? Total debt, and debt-to-capital ratio. Big swing and a miss there, Sarge. I could have had a V8.

Okay, this horse runs with a beta of 1.6. That means that technically, we are going to get a selloff. I keep telling myself that. Three-year sales growth is hot at a rate of 14%. Current and quick ratios are fine. Cash flow is solid. Third-quarter earnings are due October 22. Let's go to the chart. 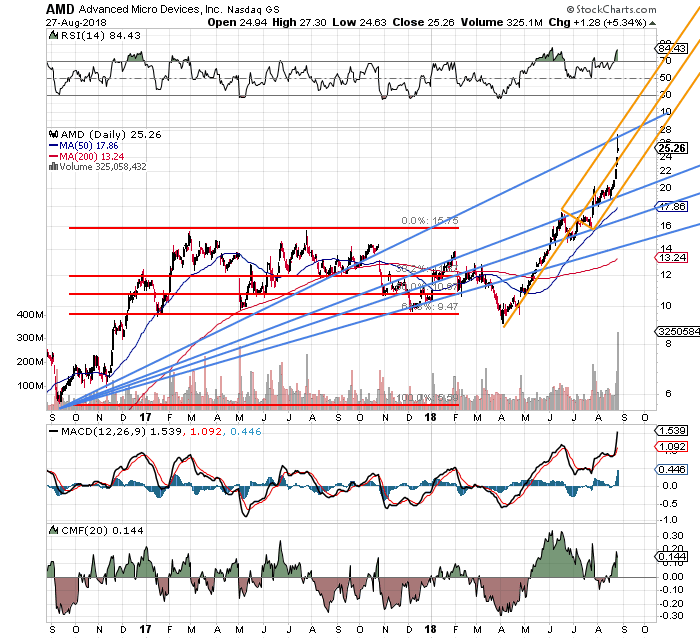 See the Pitchfork? No way that trajectory holds, or at least I'm not buying the name at the top of a model like that. Daily MACD? reminds me of Crazy Eddie. The Fibonacci Fan as laid out gives us something, at least that is if the remaining shorts have enough gas in the tank elsewhere to not end up being forced into action. With a naked equity position out of the question at these levels, at least for me, I've got to figure something else out.

Note: I have been shorting AMD puts all along, without ending up having to buy the shares. It is important that the investor not only be willing to buy the shares, but actually want to own the shares on a dip, which is the fact in my case. If I end up never eating these shares, at least I drag in some revenue with the stock's upward movement. Better than being a wallflower at the school dance.

Trade #2: What An Investor Could Do (minimal lots)

Now, mind you, when it comes to AMD, I have been more like the Mighty Casey than Mike Schmidt. If one felt compelled to own the shares, my thought would be to alleviate the cost by writing a covered call against the position.

Get an email alert each time I write an article for Real Money. Click the "+Follow" next to my byline to this article.
TAGS: Investing | Global Equity | Technology | Economic Data | Earnings | Economy | Markets | Newsletter | Options | Politics | Stocks