Sugar Land, Texas, the home of Valero Energy Corp. (VLO) , may be under a lot of water right now, but the chart and indicators of this refiner suggest it could be headed higher in the weeks ahead. (Jim Cramer offers his thoughts on the potential impact of Hurricane Harvey on Valero in his opening story this morning.)

Prices have been challenging the $70 area for several months, but it looks like an upside breakout is in the realm of possibilities now. Let's drill down on the charts and indicators to see how prices have shaped up.

Looking at this daily bar chart of VLO, below, we can see that prices have been in a $60-$70 trading range since December. Within this nine-month trading range we can see two parts. Part one is from January to early June, when prices slowly decline from above $70 to short of $60. The 50-day moving average line peaks in February and turns down in March. Notice the stable On-Balance-Volume (OBV) line, which moves sideways and only dips a little in April and May, telling us that there is only a minor amount of aggressive selling in this time period. The second part of the trading range is from June until now. Prices trade back up to $70 and the OBV line improves. Prices test the rising 200-day moving average line in June and August and both experiences look like buying opportunities in hindsight.

The Moving Average Convergence Divergence (MACD) oscillator spends a lot of time around the zero line, but cover-shorts buy signals appear in April, June and now. On balance, the period from June looks bullish and prices appear "ready" or poised for an upside breakout.

In this weekly bar chart of VLO, below, we can see that the $70-$74 area has proved to be significant resistance since 2015. Prices are above the rising 40-week moving average line, but it was tested earlier this month and in May. Volume has diminished this year but the weekly OBV line has been steady, and looking closer we can see it has increased in June. The weekly MACD oscillator is turning up for a fresh outright go-long signal above the zero line.

In this Point and Figure chart of VLO, below, we can the sideways trading range. Because the chart is constructed differently than a high/low/close bar chart, the top of the trading range is $68.77 and most of the lower end is around $62.25. A breakout on this chart is $69.45 and it should open the way for further gains. Volume is not shown on this chart, but we would like to see volume increase significantly when prices reach $69.45 and higher. 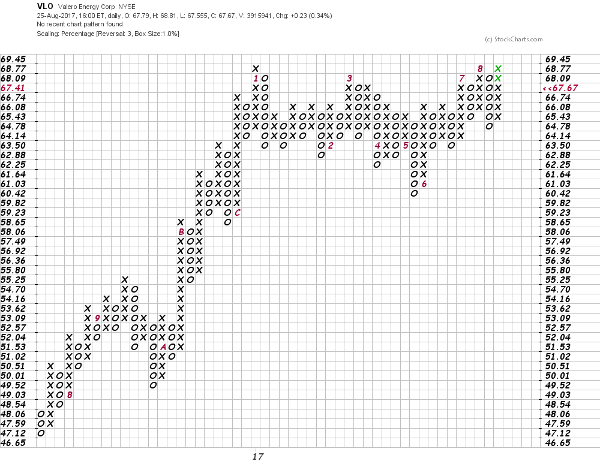 Bottom line: With prices above the rising moving averages, both short term and long term, we want to approach VLO from the long side on strength. Go long above $70 and add above $72. A closed back below $64 would turn the chart negative.

Get an email alert each time I write an article for Real Money. Click the "+Follow" next to my byline to this article.
TAGS: Investing | U.S. Equity | Energy | How-to | Risk Management | Stocks