We've tried to work inside a very long-term and a relatively short-term strategy when it comes to investing in the oil space: Inside the long term, we've been identifying the winners from the losers in the coming fresh oil boom, which I believe will send prices above $100 by the end of 2017. In the short term, we've noticed the vagaries of the financially and rumor-driven oil price that has prematurely inflated many of those stocks, and we've taken a break from investing in those companies until a better value price can be found.

Now that a good part of the rumor mill has quieted down and the speculative trade has as well, we're starting to see oil move again toward the mid to low $40s.

This, however, will be the last time down for oil -- and your last opportunity to target some great oil companies.

It's one thing to have a long-term strategy and invest accordingly, but quite another to time those trades effectively. Since a terrible year ended in 2015, I've been having increasingly better success this year in timing entry and exit points, and much of my experience and analysis tell me the coming mini-crash in oil and oil stocks will be the last one we ever see. I've lightened up in virtually all of my best independent U.S. E&P positions, but readying myself again to deploy into them as prices on oil drop (I hope) again toward $40.

All of the hopes of a September production freeze from OPEC and non-OPEC members are correctly fading. The dollar, which has stabilized in the last few sessions, looks ready to rebound higher again. 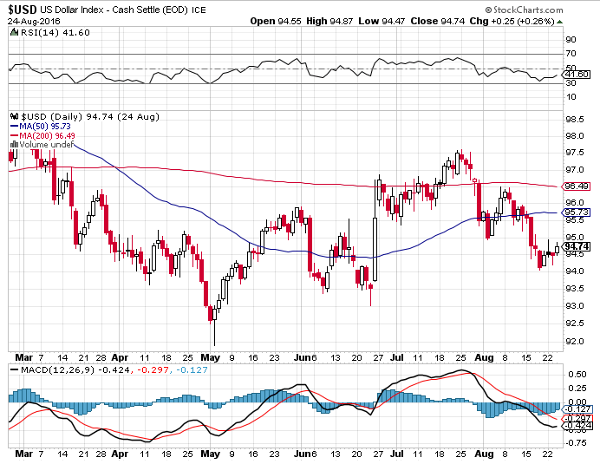 Speculative oil buyers have increased their positions far ahead of the fundamentals, indicating that they're a bit early to the party. Stockpiles increased by 2.5 million barrels last week, and production is not yet falling off fast enough to clear the market of continuing huge gluts -- at least not until another chokehold of $40 oil puts some of those producers back onto the sidelines. When oil again begins approaching $40, we'll again hear the wrong chorus of oil never seeing $70 and of oil companies fit to survive sub-$50 prices. Just like the last time in the spring of this year, that will be the time to add to positions again.

And I think it's the last opportunity like that we'll ever see.

I want to create new targets on independent E&Ps where I can again increase positions. I want to see EOG Resources (EOG) get close to $85 before adding again, Cimarex Resources (XEC) nearer to $125, Continental Resources (CLR) to $40 and Hess (HES) to $53. I'd rather miss these targets than overpay for oil companies that have reached stock prices that correspond to oil in the $60s rather than nearer to $50.

Patience in the short term will lead to the better returns we're looking for in the long term.

Thank you to those who've expressed interest in my interactive webcast, beginning this fall. More info will be coming after Labor Day. And if you might have interest in this service but have not yet submitted your email, please do: dan.dicker@thestreet.com