This commentary originally appeared on Real Money Pro on Aug. 25. Click here to learn about this dynamic market information service for active traders.

Yesterday, biotech and pharma stocks were slammed as Democratic presidential nominee Hillary Clinton weighed in on a controversial price increase. Mylan (MYL) , the creator of the EpiPen, is under heavy criticism as the cost of the device has quadrupled.

While Mylan did in fact make EpiPen more affordable this morning in response to the criticism, when will its stock stop falling? Some are suggesting that the controversy will blow over quickly, and that Mylan is a steal at these levels, but I disagree. I wouldn't rush to buy the stock, even though the drugmaker's shares have lost about 10% over the past two sessions.

Technically, Mylan is oversold according to its RSI (relative strength index) for only the second time this year. However, this is a highly emotional issue that is garnering significant media attention. I would only consider buying Mylan if it fell below $40, as this would create a deeply oversold situation. 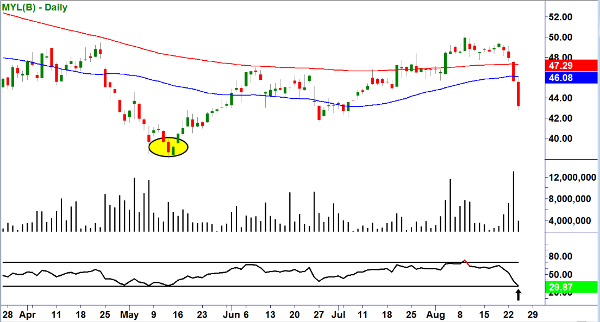 Is Clinton's criticism of Mylan fair? Maybe, but that hardly matters. To most observers, perception is reality, and right now Mylan is perceived as greedy. Even if the increase was justifiable, the company seems to have cut the price of the EpiPen to avoid a publicity nightmare. Mylan was in a no-win situation.

While Mylan has nothing to gain, Clinton and other politicians have nothing to lose by bashing the company. You can bet that at the next hint of an unfair price increase involving companies in this sector, politicians will be waiting to pounce.

This is one of the reasons why I'm maintaining a short position in the iShares Nasdaq Biotech ETF (IBB) . The ETF sold off sharply yesterday, closing at its lowest level in nearly a month. IBB received twin sell signals earlier this month, from its MACD (moving average convergence divergence) indicator on Aug. 10 (point A) and from its RSI indicator on Aug. 8 (point B). 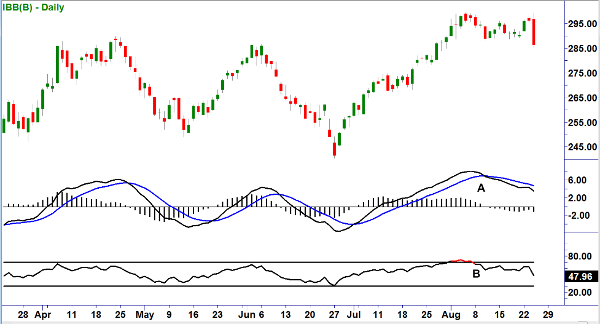 Since biotech and pharma companies are likely to undergo heavy scrutiny over the next few months, they'll have to be very careful about price increases. Some may even defer justifiable price hikes, just to avoid unwanted attention. That's a situation that could put pressure on profits, which is another reason why we're maintaining our short position in IBB.

Get an email alert each time I write an article for Real Money. Click the "+Follow" next to my byline to this article.
TAGS: Investing | U.S. Equity | Healthcare | Politics