Bases loaded. Two out. Bottom of the ninth. In comes the closer. The opposing manager counters with his team's best hitter. The batter knows what he'll face. Heat. Nothing but heat. They say a walk is as good as a hit. Right now, the investing public is just saying "Don't strike out."

Equity markets continue to feel around for the post-Tuesday all-time high that would confirm the longest bull market in history. Though truly quiet, thanks to the "dog days" of August, equities worked their way slightly lower, but in a broad way on Thursday. Of the major indices, the Dow Jones Industrial Average was the under-performer, and within that blue-chip index, Caterpillar (CAT) was the weakest name, down 2%. This would indicate to this market participant that trade talks have not gone as smoothly as they might have. Other highly exposed trade names such as Boeing (BA) , and key materials sector name DowDupont (DWDP) also gave up some turf.

What at first seemed inferred, later became news. Both U.S. and Mexican officials, while agreeing that there had been progress, also admitted that it was unlikely that there would be a new NAFTA-style trade deal imminently announced between the two nations. Sticking with the topic, the low-level trade talks initiated by the Chinese Commerce Ministry this week appeared to end without an overt indication that any progress had been made. This is the primary reason why you saw some late strength in longer-term U.S. Treasury debt in yesterday's trade. This is also why there was some haven-seeking attention paid to the U.S. dollar.

To make matters worse, both the U.S. and China went ahead with their already announced next tranche of retaliatory tariffs. The comment period for the bigger, badder, next trance of $200 billion worth of Chinese imports into the U.S. is slated to wrap up on September 5.

My guess is that we'll see a number of trade-related, market-moving headlines going into that date that will impact stocks and commodities dependent upon (or at least partly so) China's place as an engine for world growth for their own support. That growth remains in doubt as long as negotiations fail, or fail to at least show the kind of progress seen with Mexico.

The Mighty Casey wipes his mighty brow. Will this be the third of three disappointing outcomes that had perked up trader sentiment on the way in to work earlier in the week. Monday and Tuesday showed nice-sized market gains from where we left off last Friday? This gets more complicated than you think.

Many have played into the potential for somewhat less-hawkish commentary from the Fed Chair when Jerome Powell speaks this morning. We know that Powell has been steadfast in his belief that the domestic economy is very strong and the rising short-term upward pressure on consumer pricing is best addressed through the current trajectory of monetary policy. No one doubts the likelihood of a rate hike at the conclusion of the next FOMC meeting on September 26.

That said, many of us have pointed out that while trade talks play out, while housing number stumble about due to pricing concerns, while wages continue to lag headline inflation, maybe it would be wise to hit the brakes on either the regular increases for the Fed Funds Rate, or the balance sheet management program know as quantitative tightening. Those in this camp seemed to find an ally this week in Atlanta Fed President Raphael Bostic, who, at least until the end of the year, is a voting member of the committee.

Now, I think it stands as common sense that the president has not weakened central bank independence through his jawboning on interest rates, and nearly every president who has ever had to co-exist with the Fed during a rising rate environment has made their displeasure known in some way. This president is simply more straight-forward about it, which likely creates a problem for today.

Powell, even if he had been thinking about a nuanced approach today that might put some daylight between where he has been on policy and where he might go, will instead likely feel some pressure to re-assert the impression of independence at the central bank. He likely sticks to the already-in-place drumbeat on policy. Strike Three?

The Season Within the Season

Every trader knows how well this earnings season has gone. Every trader knows that the retail industry brings up the rear as far as timing goes. Outside of the banks traditionally kicking the season off, this is perhaps the most exciting part of earnings. Yes, technology is exciting, but the bunching together of the banks and retail bring focus, and focus is enhanced by the fact that these are all names that are well known to all traders, even those who make their living doing something else.

When it comes to a well-known industry group, such as this, investors also have personal prejudices in place based upon past experience, which makes the season's wrap-up all the more interesting. Staying with retail, this has been a season for the ages, and coming off of the Census Bureau's hot July data nationally, many of the names are raising full year estimates.

What do Walmart (WMT) , Target (TGT) , Home Depot (HD) , Lowe's (LOW) , TJX (TJX) , Kohl's (KSS) , Nordstrom (JWN) , Macy's (M) , Urban Outfitters (URBN) , Williams-Sonoma (WSM) , Tapestry (TPR) , Estee Lauder (EL)  and even poor L Brands (LB) all have in common? They all beat expectations this quarter for earnings per share and for revenue. On top of that, most of these names also posted impressive comparable sales without seeing cannibalization from the e-commerce side.

The bottom line here is that the American consumer is back. Tax cuts have created disposable income for those fortunate enough not to live in "high real estate tax" states, where the lack of wage growth above and beyond inflation could not be overcome. Is this a one-off? Or is this more sustainable? I seem to remember a couple of key central bankers mentioning over the years something called "break-away" velocity. Guess I'll let you know in six-to-nine months how that turns out.

Next week, the stragglers come in. Among them will be some more retail names such as Best Buy (BBY)  and Tiffany (TIF) on Tuesday, and then Abercrombie and Fitch (ANF) , Burlington Stores (BURL) , Ulta Beauty (ULTA)  and Lululemon (LULU) on Thursday. I already wrote about LULU back on Tuesday. My focus for the moment falls upon a name that now seems sort of under the radar -- Best Buy.

Wall Street consensus for Tuesday's release is for EPS of $0.82 on revenue of $9.27 billion. These numbers, if precise, would represent year-over-year growth of 18.8% and 37%, respectively. Whispers are running several cents above expectations.

A word of caution: The industry's average price target for this name is $79, or 4.36% lower than last night's closing price. According to Thomson Reuters, 14 of 22 analysts Street-wide have a "hold" rating on this name. Of the rest, five are positive while three are negative. Not much guidance there. I, by the way, am long this name -- and I have a 15% gain on the position that I need to protect going into the numbers.

Best Buy recently announced the acquisition of Great Call for $800 million in cash. Great Call is a provider of health and emergency services for the aging. The operation has 900,000 paying customers. Does this expansion away from big box retail and into health and wellness illustrate a keen awareness of the marketplace, or is this the kind of blurring of focus that often gets firms into trouble?

How to protect a hard-earned win in a name that you're not sure you still trust. A long time ago, a quarterback named Joe Pisarcik learned that maybe kneeling on the ball at the end of the game is better than running something out of the playbook as time expires. This is what I'm going to do.

--Sell all or most of my long. Your spider sense can be your best pal. Take a profit. What does Jim Cramer say? Nobody ever got hurt ringing the cash register.

Because I'm adventurous, and always trying to turn a buck, there's more. 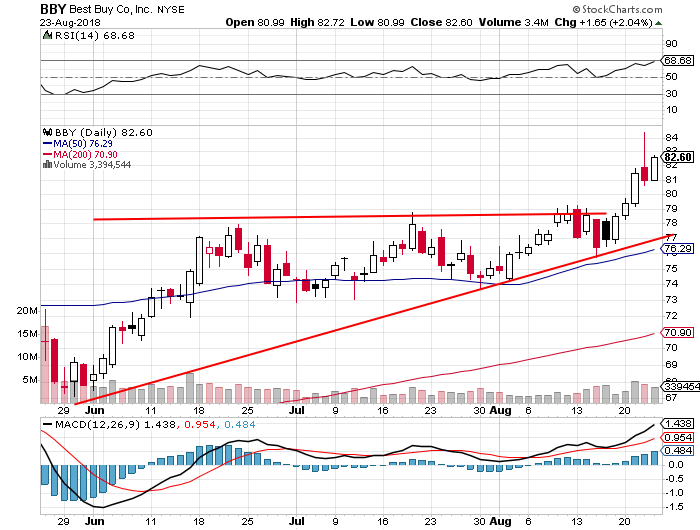 Prior to this pre-earnings run-up, the stock had hit resistance regularly at a level below $79. The rising trend line of support loosely correlates, at least for August, with the 50-day Simple Moving Average.

1) BBY goes higher. I still sold my shares, but at least I have added $195 to my net profit on the entire trade.

2) BBY trades lower. If forced to eat the shares, I will have made my sale at something close to $82.60, and my re-entry would be initiated with a net basis of $75.52. This means that even if the name trades in my face, I will have extracted more than $7 per share and ended up with a similar-sized long position. Far worse things have happened to far better people.

Get an email alert each time I write an article for Real Money. Click the "+Follow" next to my byline to this article.
TAGS: Investing | Global Equity | Regulation | Markets | Consumer Discretionary | Technology | Economic Data | Earnings | Economy | Newsletter | E-Commerce | Politics | Stocks