It wasn't long ago when Ambarella (AMBA) went hand-in-hand with GoPro (GPRO) . At that time, it was the latter leading the prior. Good news for GPRO meant a pop for AMBA. If GPRO eschewed bullish chatter, AMBA would pay the price.

The correlation between the two has waned, but it will rekindle from time to time. Lately, the student has become the master. AMBA has tacked on a 21% gain this year while GPRO is off nearly 14%.

Over the last 12 months, GPRO is down 67.5% while AMBA is down "only" 22%. Only. Outperformance can mean less bad at times, rather than a positive return.

Since June, AMBA has been a rocket ship moving from $41 to $69. August has witnessed a solid push higher, followed by a consolidation cup, and now continuation. 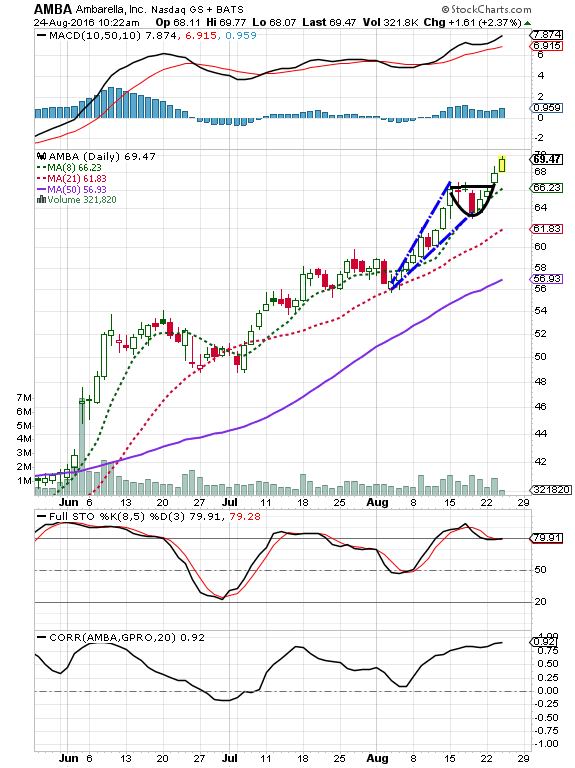 Momentum and trend have been strong, with re-tests successfully completed with very little price pullback.

Again, we see correlation currently high between AMBA and GRPO, so does that mean GPRO is a buy here?

GPRO has a very similar August pattern compared to AMBA, but the issue here is the $16 level. GRPO continues to flash selling tails and buying exhaustion at $16. AMBA had a similar setup around $66, but has blown through that level over the past two days. 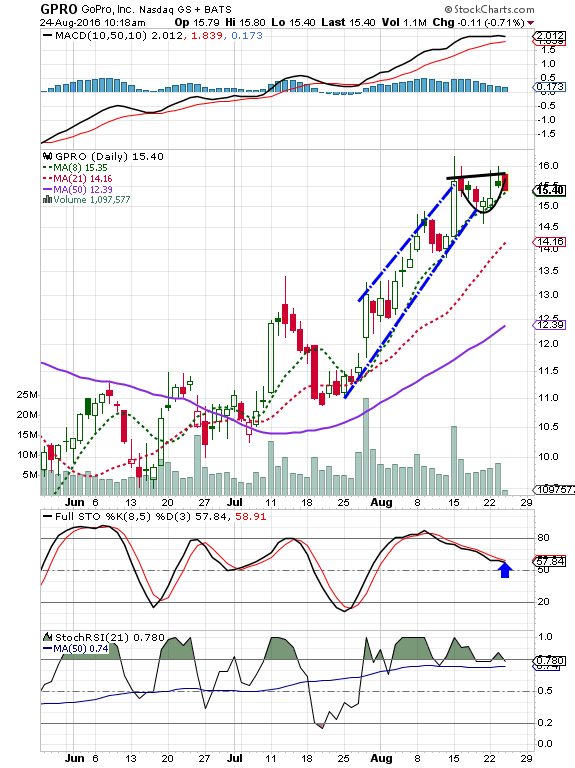 While trend is similar between the two, GPRO has lost some momentum here and needs to alter the current course today or suffer a big blow to the bullish setup. The eight-day simple moving average (SMA) has been solid support for a month and we are only pennies above today.

Ideally, GPRO bounces a bit throughout the day and maintains a mostly bullish stance. If I were long, I would still hold, but look at $15 as my stop level. A move over $16 is the trigger I need to get involved and I think it would reward bulls with a couple of bucks to the upside in short fashion, maintaining the same path as AMBA.

The move in AMBA doesn't guarantee success in GRPO, but it sure looks as though it is trying to provide hints for traders. I don't see anything to do on GPRO at this very second, but do feel as though this should be higher on the radar. A move over $16 sets us up as buyers while a push under $15 has us looking for $13.

GPRO is worth mounting on the watch list for sure.

Get an email alert each time I write an article for Real Money. Click the "+Follow" next to my byline to this article.
TAGS: Investing | U.S. Equity | Technology | Markets | Consumer | Gaming