In a repeat of last Tuesday's stellar housing and consumer data, when Home Depot (HD) reported a great quarter followed by the strong housing starts data, this Tuesday brought another round of good news. First, giant luxury homebuilder Toll Brothers (TOL) posted impressive quarterly results, and then we saw an even better new home sales print.

Toll matched earnings estimates while beating on revenues, with some very positive comments on the health of the housing market. Backing up these comments were year-over-year metrics such as a 16.4% price increase in homes delivered and an order backlog that was up 17% in quantity of homes. All of this led to the stock rising almost 9% for the day on seven times its 10-day average trading volume.

As a perfect complement to Toll's earnings, we had new home sales (NHS) data for July which came in 12.4% above June and a whopping 31.3% higher than a year earlier. This is the highest level for NHS since October 2007.

When you look at the government data along with the great earnings reported from D.R. Horton (DHI) , which is also the country's largest homebuilder, Toll and Home Depot, the message is clear: we have a strong housing market thanks to a healthy job market that is giving people the resources needed get these transactions done in today's strict lending environment.

I would be remiss not to cite the benefit of lower rates in all of this, but an argument can be made that higher rates would also bring about greater home affordability, all things being equal. The fact is, we have seen rising real estate and stock prices through periods of significantly higher rates than what we have now, so higher rates are not to be feared.

Meanwhile, the Chicago Fed National Activity Index (CFNAI), which came out Monday at a solid 0.27 (anything over zero indicates an economy performing with above-average growth), provides a fairly comprehensive and historical look at the overall health of the economy. The CFNAI is an index meant to capture economic activity as is measured by four broad categories: production and income; the labor market; personal consumption and housing; and sales, orders and inventories, all of which are then broken down into 85 line items. 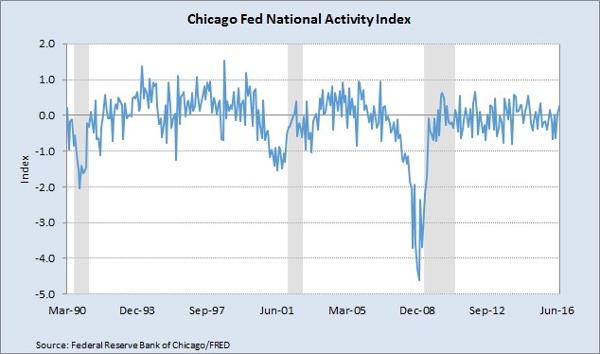 All this said, we can see that activity (even while understated) is still at a historically good level. And taking the CFNAI data along with the recent housing market news, everything is coming together to show an economy that is performing well.