The whole dog and pony show at Jackson Hole, Wyoming kicks off later today and runs through Saturday. Fed Chair Jerome Powell is scheduled to speak tomorrow. That single event will obviously overshadow what has transpired this week from a business and economics perspective. Even if this has already been an incredibly newsworthy week. It was these news events -- the ongoing length of the current bull market, the re-engagement of U.S./China trade talks, the convictions of persons formerly close to the president on various criminal charges and the mixed signals being given regarding future prospects for an eventual Saudi Aramco IPO -- all leading into this Jerome Powell speech that put the FOMC minutes (usually kind of a big deal) out of mind and in the corner with baby.

The FOMC minutes, sometimes interesting and always dated, actually offered some insight this time around into the state of mind at the central bank. Obviously, the current trajectory of American monetary policy remains on course. In other words... expect a rate hike on September 26. That won't surprise anyone, as futures markets are currently pricing in a 96% chance of an increase in the Fed Funds rate at that policy meeting.

What I did find mildly surprising in these minutes was the fact that some of our central bankers actually worried that if the economy performed "above potential" for too lengthy a period that the condition could trigger an eventual economic downturn due to "inflationary pressure or financial imbalances."

On top of these concerns were others that perhaps the "experimental" tools most recently used at the world's central banks such as rate cuts, asset purchases and forward guidance, might, while providing "significant accommodation," be somewhat less effective coming from a lower current bound on interest rates. I mean this is stuff that you and I think of and already accept, but to hear central bankers worry about the economy, I think might have caught some market participants a little off guard.

Let's keep in mind that Atlanta Fed President Raphael Bostic, a currently voting member of the FOMC, re-iterated his expectation for just one more rate hike this year. Bostic cites trade tensions and global events as reasons to consider hitting the brakes on rising rates.

While speaking from Tennessee on Monday, Bostic said "I pledge to you I will not vote for anything that will knowingly invert the curve and I am hopeful that as we move forward I won't be faced with that.'' I would think that this would go without saying for any central banker, but for a voting member of the committee to feel the need to offer that information publicly is nearly staggering to this long-time Fed watcher.

On the other hand, Dallas Fed President Robert Kaplan thinks that the Fed may only have to raise rates three of four more time before hitting the illusory "neutral rate." In the same essay, Kaplan expresses concerns over the yield curve. Duh. Thanks for nothing sport. I hope my team wins every game this year and still gets next year's first draft pick.

What those 90 basis points are screaming at you is that markets are not acknowledging consumer-level inflation as a medium to long-term problem, but that economic growth certainly might be. Current short-term markets are camouflaging this condition somewhat. What it means to me is that you either prioritize balance sheet normalization or interest rate policy. Not both. Not at the same time. Not anymore. Ladies and gentlemen.... I give you Jerome Powell.

Maybe. Well, not yet. Actually, we'll need to see another all-time high for the S&P 500 before that statement is fact. Why? Simple, because if the S&P 500 never makes another all-time high and proceeds to fall 20% or more over any given amount of time moving forward, the "bear market" will be measured from Tuesday's high of 2,973, making yesterday the first day of the bear, not the last day of the bull. Why is this so hard for the financial media to understand?

On that note, this is far from the strongest bull market of all time. As Dave Wilson at Bloomberg Radio pointed out on Wednesday...Tuesday's high for the S&P 500 stood 323% from where the run started in March of 2009, or roughly 16.5% on an annual basis. This compares poorly against the 1990 through 2000 bull market. That market ran 417% over that time,or about 19% annually.

Aren't statistics grand? Who's meeting up later for Strat-O-Matic?

One of my longs is at a point of inflection. I think. Being a commonly held name, I thought I might mention it. A few of you hold Microsoft (MSFT) , right? As soon as you hear it, you think not only of the traditional business lines that brought the firm to national prominence decades ago, but also of the smart decisions to mold those businesses into a subscription model as well as the name's evolution into a leading cloud services firm. A lot to love, truly.

In mid-July, the Action Alerts PLUS holding went to the tape with fourth-quarter earnings that beat on both the top and bottom lines. They told you that LinkedIn grew 34%. They told you that commercial revenue grew 35%. They told you that gaming grew 38%. I could go on. Everything grew. We focused on the cloud. Intelligent Cloud was up 20%. Server products and cloud services grew 24%, and wait for it ..... Azure grew a ridiculous 85%.

The firm raised first quarter revenue guidance to a range of $27.35 billion to $28.05 billion. Consensus had been for something close to $27.4 billion. Huzzah. the stock reacted well -- peaking in late July. Since then... meh.

The firm will put that Q1 data to the tape in late October. Expectations are still in place for significant year-over-year gains for both lines. The balance sheet is no problem. Cash flow is impressive. The name trades at 21.8x forward looking earnings. That is on the cheap side for the industry. So... what's the problem? 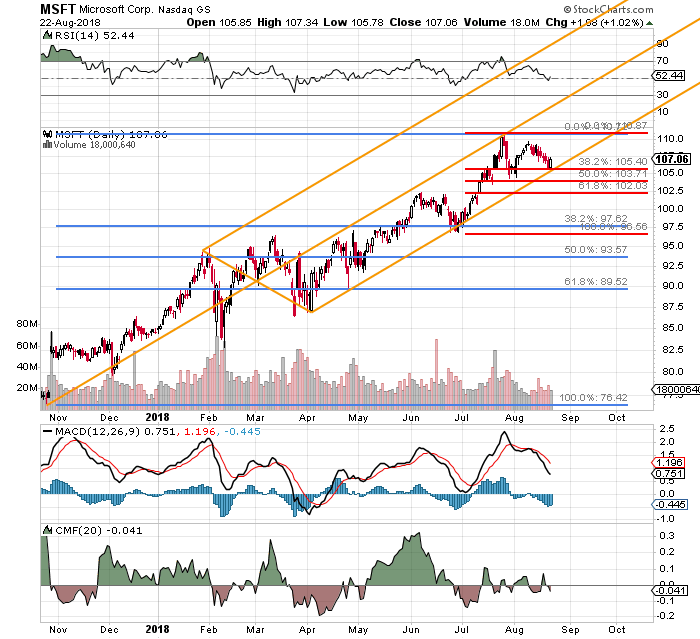 Take a look at this. Most obvious is the obedience that MSFT has consistently shown to the lower chamber of the Pitchfork model that starts in November of last year. Am I the last trader using these Pitchforks? I mean, gee wiz... Is it not glaringly obvious that this tool is effective?

One might also see that the lower trend line of said pitchfork is under pressure. I have also place two Fibonacci models on the chart. The blue model begins with the pitchfork. The red model with the most recent obvious move. The levels provided by the red model have already worked twice, most recently at a 38.2% retracement. The blue model has not been tested, but I think I may use it to provide my position with a new panic point.

Over the last couple of years, MSFT has consistently rallied to varying degrees into earnings. This might be our chance to initiate or add, given your current level of exposure. All you need is for this nearly six-month pitchfork to continue on.

Worth the risk? Let's figure this out. July's high printed at $111.15. That's certainly do-able as a target price. I think we can do a little better than that, even if we need the rest of the year to get there.

Trying to make a quick buck ahead of earnings? Try a Buy-Write.

Looking to invest, but at a discount?

Get an email alert each time I write an article for Real Money. Click the "+Follow" next to my byline to this article.
TAGS: Earnings | Economic Data | Economy | Investing | Markets | Politics | Stocks | Financial Services | Technology | Global Equity | Newsletter