Aren't markets wonderful mechanisms? Sometimes, all an investor has to do is stay put and the market bounces back. It looks like this is what's happening right now, and it is helping not just investors, but some companies as well. But more than halfway through the year, even as certain areas of the market appear to be rebounding from a tough start, some stocks are still struggling.

At the end of January, Real Money unveiled its "Stressed Out" index of 20 troubled stocks that investors should be adding to their distressed watch list. These companies carry high debt loads and have a history of burning cash and resources in the absence of steady cash flow.

But given the shift in the marketplace, some companies have managed to work their way off the list. In light of this, Real Money is overhauling the index, removing seven stocks and replacing them.

"I would emphasize the forces of capitalism and progress here -- not kidding," said TheStreet's Jim Cramer. "The market cured many of the stressed-out players and that's a very reassuring sign. In a bad market, nothing really gets cured."

Steelmakers AK Steel  (AKS) , Timken Steel  (TMST) and U.S. Steel  (X) have all shown gains since the Commerce Department's decision to impose import tariffs on Chinese steel. Since the watch list's inception, AKS shares have more than doubled, TMST has gained 80% and X shares have quadrupled.

But the recent success goes beyond just pricing and tariffs.

"While the market's attention has been focused on the expected direction of steel prices, AKS and X surprised us all this quarter by putting up strong core operating performance largely driven by substantial cost improvement," said Barclays analyst Matthew Korn in a research note Aug. 3.

Korn added that U.S. Steel has gone from guiding to break-even fiscal-year earnings before interest, taxes, depreciation and amortization (EBITDA) to a run rate of more than $1.6 billion and backing it up with lower flat-rolled steel costs. Meanwhile, AKS has put up two-straight quarters of mid-single digit EBITDA margins and solid free-cash-flow generation, the Barclays analyst noted.

The steelmakers are standing on more solid ground, but they are being replaced by stocks in a struggling U.S. industry: retail. J.C. Penney  (JCP) , Sears Holdings  (SHLD) and The Container Store Group  (TCS) are now stressed out.

While J.C. Penney has managed to perform above its peers and expects its same-store sales to strengthen in the second half of the year, the retailer is still in the midst of a turnaround. The company plans to close about seven stores this year. CEO Marvin Ellison said the company is looking to grow comparable sales between 3% and 4% by 2019. During an analyst meeting in Dallas last Wednesday, Ellison outlined his "final phase of the turnaround," which centers around growth and profitability. He said the company has maintained its focus on delivering $1.2 billion worth of EBITDA in 2017.

But the retailer has a weak balance sheet. J.C. Penney's total debt-to-equity ratio stands at 7.2x, while its cash ratio is roughly 0.4x. Furthermore, it has reported a negative free cash flow, except for the January 2016 quarter, since 2012.

This is similar to what's happening at Sears. While the holding company that operates the iconic retail chain has reduced its net debt by $300 million since the first quarter of 2015, it only had $286 million in cash as of the first quarter of 2016. The retailer is also in the process of transforming to a "member-centric integrated retail model" from a traditional store-network model. It does have a plan in place to fund the transformation, but that includes a $500 million secured-term loan, a $750 million asset-based lending-term loan, a $1.97 million asset-based lending (ABL) revolving credit facility extension -- and the list goes on. The company's total debt is $2.73 billion, of which $2.11 billion is long-term debt; its cash ratio stands at 0.04x.

The Container Store Group is off to a tough start and the challenges remain. For its fiscal first quarter, the company reported a loss of $0.04 per share on net sales of $177.4 million. Comparable-store sales were down 1.4%. The Container Store Group plans to open seven locations in fiscal 2016. One was opened in the first quarter, which means TCS has 80 stores. The company maintained its full-year guidance, which surprised Jefferies analysts.

"We have modeled below the -1.5% to +0.5% comp guidance with an estimate of -2% and EPS at $0.13 on the year vs. guidance of $0.20 to $0.30," the analysts with Jefferies wrote in a research note on Aug. 10. They cited softer results than expected from sales and marketing initiatives and increased competition from traditional and online retailers as risks to the valuation. The analyst team lowered their price target to $5 from $6.50.

The Container Store Group also has a strenuous debt load. Its $314 million in debt means that it has a total debt-to-EBITDA ratio of 5.16x, while its cash ratio stands at 0.11x.

Frontline, one of the world's largest oil tanker companies, is seriously stressed. Its shares have fallen about 90% over the past 12 months. The company is holding roughly $1.1 billion of debt vs. trailing 12-month EBITDA of just $324 million. Frontline has also been producing negative free cash flow since 2012.

LendingClub announced on Aug. 10 that CFO Carrie Dolan resigned from her role to "pursue a new opportunity." Bradley Coleman has been appointed principal accounting officer and interim CFO.

The company is also reportedly in talks with Western Asset Management to set up a fund that would purchase as much as $1.5 billion of loans over time, Bloomberg reported on Aug. 4. Western is a subsidiary of money manager Legg Mason (LM) . A deal could be announced in coming weeks, Bloomberg reported, but the agreement is not final and talks may not result in a transaction.

This news comes after former CEO Renaud Laplanche was forced out of the company. The board had discovered problems with its lending practices. The stock has plummeted 57% year to date.

Given the recent events, analysts with Oppenheimer said in an Aug. 3 research note that restoring confidence takes time. While they forecast revenue/EBITDA to re-accelerate in 2017, there are several key risks to the downside, such as macroeconomic headwinds and declining credit environment, competition from larger banks and stricter regulatory rules on interest rate caps.

After the latest quarterly results, the Oppenheimer analysts maintained their Perform rating, even though LendingClub guided EBITDA $30 million below Wall Street's estimates. But they still believe that the company is implementing the correct strategies to restore growth and investor confidence.

LendingClub currently has $3.95 billion in net debt and has a total debt-to-EBITDA ratio of 7.2.

When looking at Valeant, analysts with Canaccord said "signs of the apocalypse are fading." The troubled Canadian drugmaker reported second-quarter results that missed bottom-line expectations. Still, the analyst team believes that management is making progress in turning around the business. They highlighted that Valeant has identified about $8 billion in assets as possible divestitures and has a plan to pay down $5 billion of debt over the next 18 months through FCF generation and non-core asset sales. Right now, Valeant has $30.5 billion in debt, which means it has a debt-to-EBITDA ratio of 7.6x along with a cash ratio of 0.11x.

Finally, there's Frontier Communications. The telecom company has a substantial amount of debt, totaling $17.97 billion, of which $16.92 billion is long term. But CFO John Jureller said during an Aug. 1 conference call with analysts that Frontier's debt "is well laddered," and he believes that the company has the ability to "comfortably manage" debt maturities coming due over the next few years. Yet, as of June 30, the company only had $683 million in cash and short-term investments. Management set a 2017 EBITDA floor of $4 billion, which Jefferies analysts noted on Aug. 2 represents a "reasonable" 2% to 3% decline from estimated pro forma 2016 expectations. 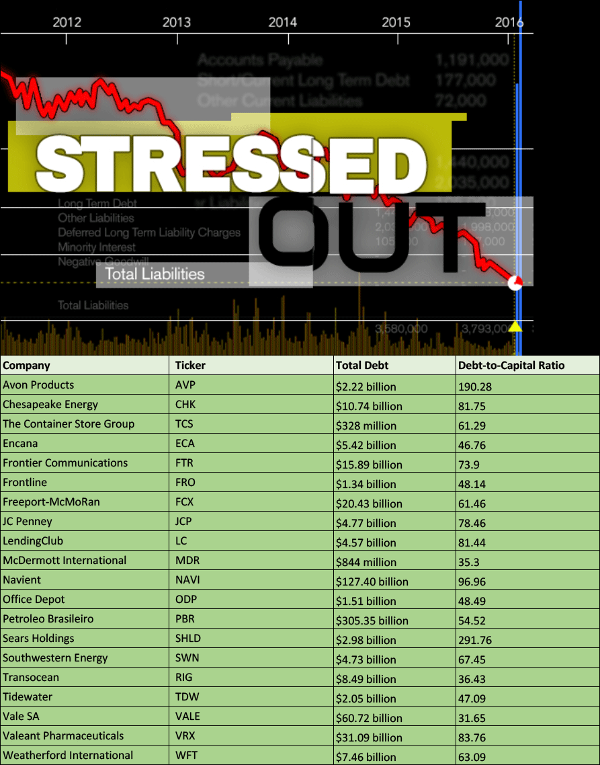 Get an email alert each time I write an article for Real Money. Click the "+Follow" next to my byline to this article.
TAGS: Investing | U.S. Equity | Healthcare | Energy | Consumer Discretionary | Telecom Services | Commodities