When a stock makes a big breakout or breakdown on some very heavy turnover, it catches the market's attention. We often feel regret that we are late to the party, and fear that if we decide to jump on board then the stock will reverse course. That is the psychological negative of not understanding momentum, for it is at these moments that the best opportunity for gain often lie ahead.

Stocks move over time, often long periods of time, yet our minds constantly think in the moment. This is a divergence that is often costly and closes our minds to great chances to make gains. We look for participation from institutions to support stock prices, for without that sponsorship and liquidity there is little chance for stocks to rise.

Likewise, when a stock gets belted and big money is fleeing, these are often great times to jump on board and ride the stock lower. Distribution is not an event, it happens over time.

Let's take a look at an example. Sanchez Energy (SN) , a small-sized natural gas name, broke out recently on very heavy turnover. The one-day move on Aug. 8 was the biggest in months, at one point up over 33% on the session. It backed away from the highs, nearly tagging the early June highs around $9. 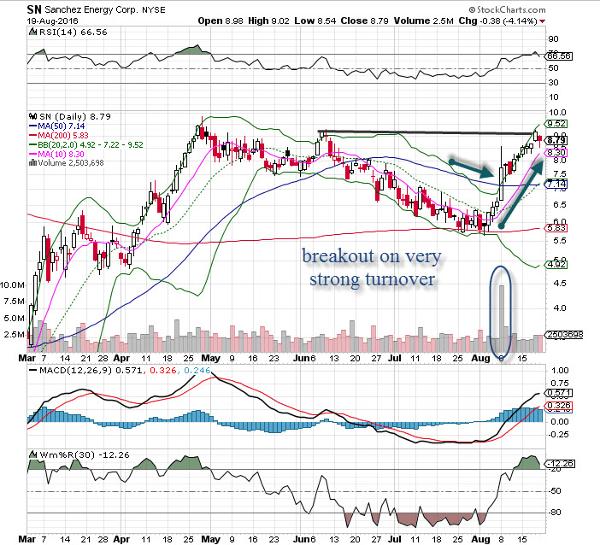 The stock surged so much during that day in such a short period of time, it was nearly impossible to catch up to it. The next day saw no follow-through, but volume was substantially weaker -- indicating strong hands were still holding, and the low from the big surge was not tagged.

The following days saw the stock moving sideways to higher, and this past week has the stock lifting above that intraday high and into levels not seen since April. The stock continues to be strong and is not giving back any ground at all.

So, is it too late? As a momentum trader, I would have to say no, it is not. And while you may have to hold your nose buying after such a strong price move, let's remember we don't care where a stock has been; rather, we care where it is going.

If buyers are still engaged (remember, institutions move slowly into stocks, not all at once) and demand is strong, then we should see prices continue to go up. The best stocks don't often give you a chance to get in. Sanchez Energy has barely given you that, but keep an eye on the next modest pullback -- it may be your opportunity to catch it before it runs again.

Get an email alert each time I write an article for Real Money. Click the "+Follow" next to my byline to this article.
TAGS: U.S. Equity | Energy | How-to | Markets | Risk Management | Stocks | Investing